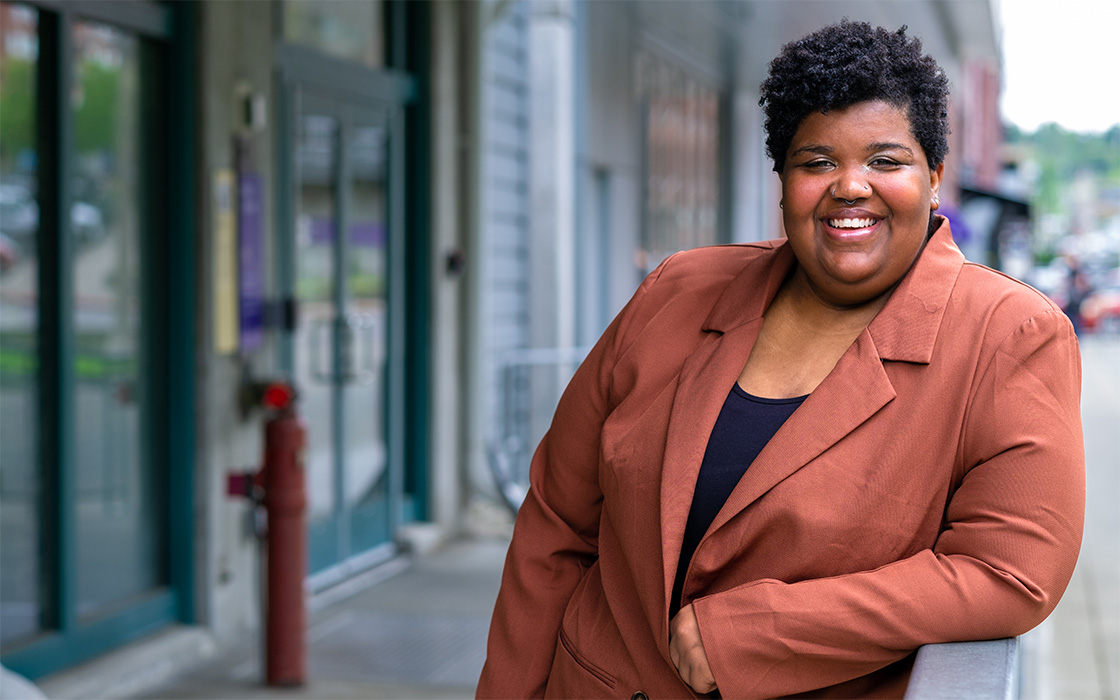 Kashira Jenkins: “How Can I Help?”

Future social worker Kashira Jenkins learned a lot about the foster care system when her mother started fostering children in 2015.

Social workers play an integral part in society by providing resources and having compassion for families and individuals in need. Kashira Jenkins, a UW Tacoma student set to graduate in spring 2022, was introduced to social work when her mother started fostering children in 2015.

Sharing her home with foster children and seeing the good and bad side of social work lit a fire inside Jenkins. “It’s sad seeing kids not getting the amount of help they actually need to be successful and a lot of these kids would be successful if they got the actual help,” Jenkins said.

During her time at UW Tacoma, Jenkins learned about the system her foster brothers and sisters were going through. “Being in social work classes, you realize it’s kind of backwards how the system is.” she said. “They’re basically giving strangers money to take care of children and not giving it to the parents who probably could take care of them if they just had that money and support.”

Social work is important to Jenkins. Her mother had a difficult childhood and had little guidance from her parents, so she made the decision to travel from Iowa to Washington state alone at the age of 14. She first moved in with her sister, but when things didn't work out there, she found herself bouncing from one family member to another.

During this experience, her mother saw the importance of support from friends and family throughout that time because she could not have overcome that battle of experiencing homelessness by herself. Hearing her mother’s story -- and seeing her passion to give back to children experiencing situations similar to her own childhood -- set an example for Kashira to get involved in providing aid to children in need, too.

Growing up in Lakewood, Jenkins went to Clover Park High School. She left school in the middle of her senior year due to illness. She eventually received her high school diploma through the Fresh Start program at Tacoma Community College (TCC). Jenkins also earned her associate’s degree while at TCC.

Jenkins transferred to the UW Tacoma campus soon thereafter. Her first year on campus, she focused on her schoolwork and didn’t get involved much with campus life. After the pandemic hit, Jenkins realized how important community was and decided to get a job on campus to further immerse herself in the campus culture. She currently holds the position of Husky Life Coordinator and manages Hendrix, the UW Tacoma mascot.

Jenkins’ social work courses showed her the importance of race and cultural representation within the field. She saw that cultural differences play a major role in decision making by social workers. It was easy for her to see how one's personal opinions and biases could affect a family’s dynamic, as well. “It's about learning and building upon that learning and having discussions about ‘How can I help this parent?’” she said. “Sometimes you have to help do the dirty work with the parent in order to have a safe environment for the child.”

After graduation, Jenkins plans to get her master’s in social work at the Tacoma or Seattle campus. “I’m entering a work field in which there’s a ladder that you have to climb but that’s work I'm willing to do,” she said.

Jenkins long-term goals include getting into policy to help make change for the community. “One of the best ways to help a community as a whole is to change the policies that affect that community,” she said. “I think it’s important to have representation in policy making specifically.”