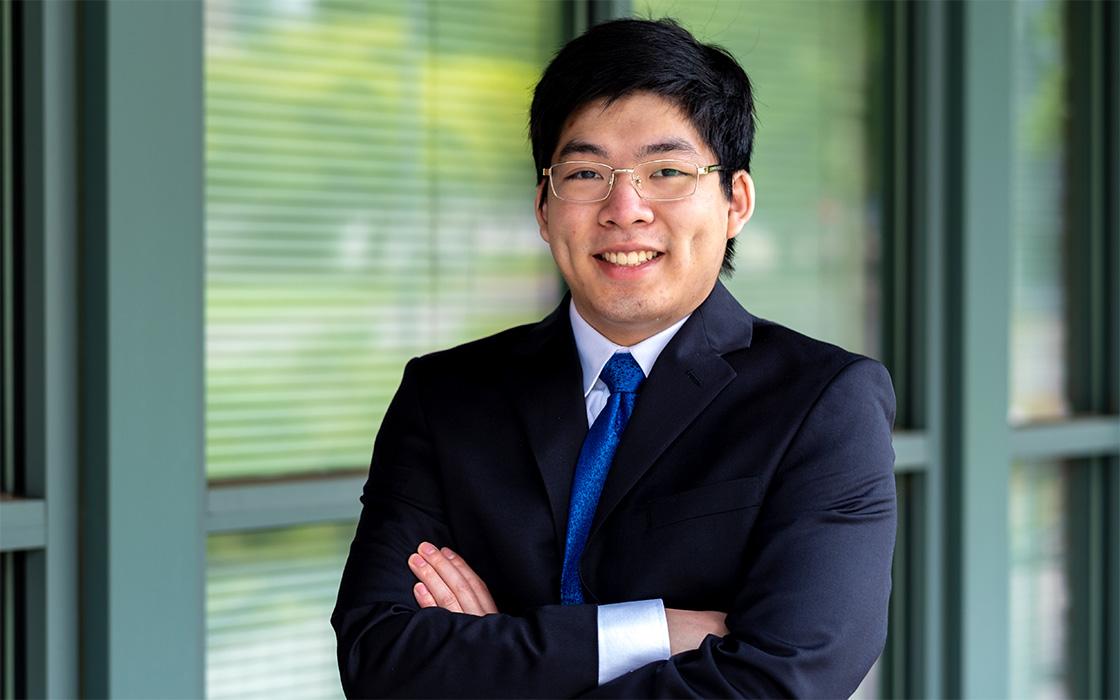 Kevin Yuan-Jie Liu thought he wanted to be a diplomat, but the more he learned the more he thought law school a better fit for his gaming interests and personal style.

Originally drawn to UW Tacoma by its proximity to Olympia, Liu hoped to do legislative internships in the capital and explore politics and government, building on what he wryly calls a “morbid interest in international relations.” The COVID-19 pandemic shut down that internship idea, but a change in his expected path came through realizations about himself and what diplomacy and a foreign service career entail.

“I enjoy puzzle games, so finding a good process and solving it is very fun to me. But international relations started becoming more like an ever-growing puzzle with no end in sight, no matter how scrappy or resourceful I could get in managing those relations. I don’t know how much of that I could have handled, so I found myself leaning away from that,” Liu said.

What he leaned into was law school, which he’ll enter in August at the University of Oregon on a full tuition scholarship. First, though, he plans to attend Commencement in June, having earned his bachelor’s in politics, philosophy, and economics in March.

Liu grew up in the Renton and Kent areas and graduated from Kent schools. He’s the youngest of three brothers, and his parents – his father drives a school bus, his mother works in shipping logistics – emigrated from Taiwan before he was born. During high school, Liu swam competitively and earned Eagle Scout honors, completing a project to repaint a grade-school playground’s US map, which came off smoothly except for that pesky border of Rhode Island.

His college career began normally, as he lived in Court 17 freshman year, served on the Residence Hall Association and made lasting friends. Those friendships solidified during early 2019’s “snowmaggedon,” which halted classes, trapped students and led to discovery of shared interests and all-night gaming binges.

Liu’s remaining college years were as choppy as any recent student’s, with the pandemic sending classes online – “some of those years, I barely remember happening” – and contributing to him commuting his final year. Throughout, though, he found ways to engage in school and with faculty.

Feeling like students often didn’t consistently know what was happening with school and health measures during the pandemic, Liu become involved in Associated Students of UW Tacoma as a senator, believing that put him closer to the information source, administration, which it did.

Among his coursework, Liu found classes on international relations and, later, genocide engaging, and the instructor, Assistant Professor Benjamin Meiches, “gladly willing to have a discussion with you about any political topic.” Liu joined the Urban Debate Society, which Meiches advises, because he saw a need to gather his thoughts faster: “That’s something I definitely had to build up.”

Having initially seen philosophy as not “super applicable,” his views changed as he dug into deep thinkers and their writings. During an online course with Assistant Teaching Professor Bidasha Mallik, “I showed up at almost every office hour just to talk about some of the course content.”

The “big STEM enthusiast” now believes philosophy “or just basic morals” should be a greater part of K-12 curriculum. And, in thoughts pertinent to the law and society, he considers whether “as our technology advances, the question becomes less of whether we can do something but more of whether we should.”

As his interest in the law grew, Liu took advantage of the Legal Pathways program that helps students and alumni prepare for law school. As a fellow, he received a free LSAT-prep class and one-on-one tutoring and a mentor, along with other support and counsel. The program helped him raise his initial LSAT score and earn the tuition scholarship at University of Oregon.

Liu sees his choice of law school and his future area of intended practice as a way to combine his loves of gaming and science.

“They kind of meet in that middle ground of intellectual property because that has to do with patents and with copyright trademarks. And it will give me the opportunity to problem solve, to puzzle solve,” he said.  “I find it intriguing.”