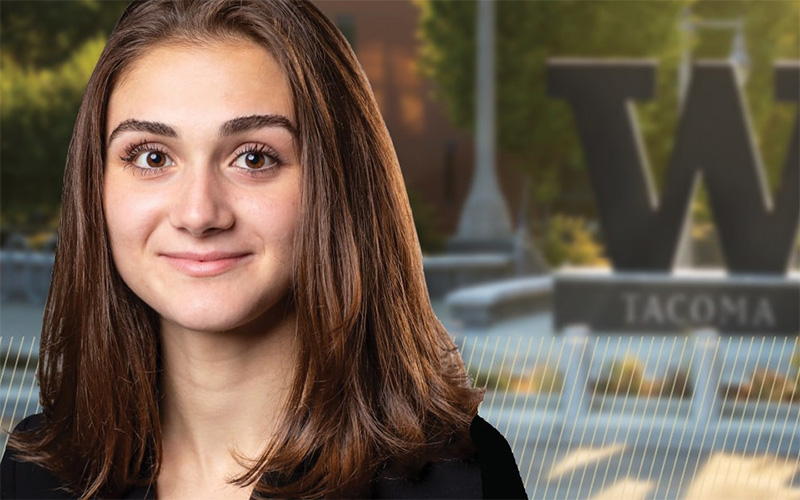 UW Tacoma junior and UW Regent Kristina Pogosian is succeeding for herself and for her family.

June 2022 update since this story was originally published:
Kristina Pogosian, '22, will receive her degree in Politics, Philosophy & Economics this June. She leaves for Armenia not long after graduation. Pogosian will spend at least the next year working as a teacher in the country. Pogosian completed her term as UW Student Regent in July of 2021. During part of her tenure, Pogosian also worked as a policy consultant for the Washington Student Achievement Council. For the past seven months she has also served as a session aide with the Washington State Senate.

Kristina Pogosian’s story starts with her parents. “My parents are incredible,” said Pogosian. “They came to a new country without any money, connections or language skills. They built a life for themselves from scratch.”

Pogosian’s father came to the United States as a refugee in the early 1990s. He is Armenian and fled the region to escape ethnic persecution. Pogosian’s mother is also Armenian and left the country a few years later. The couple settled in Washington and started a family. Pogosian is the oldest of four girls. “I grew up with two very different, often contradicting cultures, that of my Armenian household and that of my American public school,” she said.

While still in high school, Pogosian enrolled at Tacoma Community College (TCC) through the Running Start program. “I felt inspired by the campus’s loud embrace of diversity,” she said. “I no longer viewed my background as a disadvantage, but as a quality that enhanced my potential.”

Not that long ago, Pogosian and her sister talked about their futures. The pair chatted about their career goals, highlighting how they planned to fulfill their passions through their pursuits. Pogosian’s father overheard the two. “My dad found it interesting that we emphasized finding a passion in our career,” said Pogosian.  “He grew up thinking that, as long as he’s paid well for it, he could stare at a wall all day. He was raised in a Soviet country, which forced him to focus on simply meeting basic needs. Because my parents provided that for my sisters and me, we can now focus on pursuing something meaningful to us.”

Pogosian has made the most of her opportunities.  The UW Tacoma junior transferred from TCC in January 2020. While at TCC Pogosian served as Student Body President and Diversity Ambassador. She also took part in various committees including TCC’s Strategic Planning Initiative.

The 20-year-old is deliberate in all things and that includes her decision to attend UW Tacoma. As part of her process, Pogosian met with student government leaders and other campus stakeholders. She ultimately decided to attend UW Tacoma and chose Politics, Philosophy and Economics as her major. Pogosian has been active on campus, both in-person and online. She has served on UW Tacoma’s Services and Activities Fee Committee. She is also a member of the Pre-Law Society.

This is an impressive list of achievement and involvement, but Pogosian isn’t done yet. A few months ago she saw an email announcing that applications were open for students interested in serving on the University of Washington’s Board of Regents. The Board of Regents is the University’s governing body. There are 10 regents, one of whom is a student. Regents are appointed by the Governor.

Pogosian applied and went through the selection process which included interviews with representatives from the Governor’s office. Over the summer Pogosian received word that she had been chosen and will spend the next year serving as a Regent.

Pogosian is only the second UW Tacoma student to serve as Regent and the first in 11 years. She is also the second transfer student to hold the position. “I want to contribute a lens that encourages the administration to think about areas they didn’t see before,” she said. “I also want to ensure that the Tacoma and Bothell campuses are included in our decisions.”

“My parents are my greatest motivation,” said Pogosian. “I want to show them that all the challenges they overcame to create a decent life for us were not in vain, that something meaningful arose from their struggles, and their legacy will live for generations to come.”

It is not accurate to say Kristina Pogosian is driven. Drive, in its modern connotation, reflects personal ambition that only serves the individual. Sure, Pogosian wants to succeed, but not just for herself. If you need proof just look at her post-graduation plans. Pogosian is thinking of pursuing a law degree, but first, she’s going to move out of the country. “I want to teach English in Armenia,” she said. “I want to serve the community there just like I’ve been doing in Washington state.”