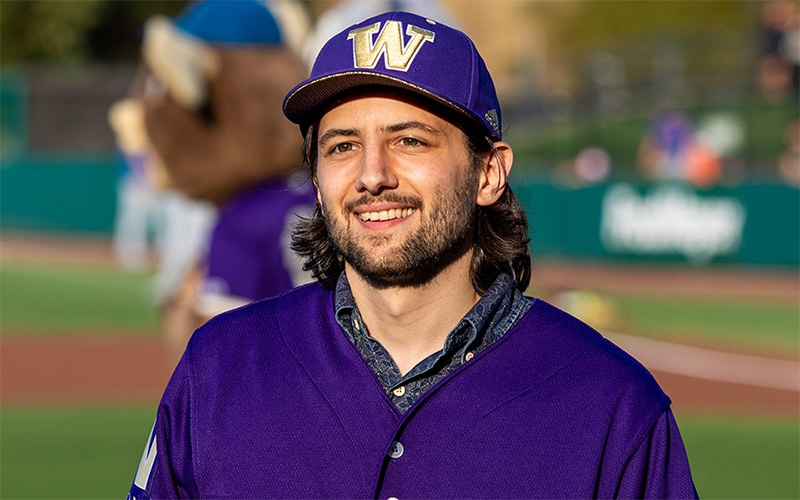 The Love of the Game

UW Tacoma Distinguished Alumni Award recipient Eric Barone took what he learned in the classroom and used it to create a hit video game.

Eric Barone has a decent fastball. Barone, a 2011 graduate of UW Tacoma, is the recipient of this year’s Distinguished Alumni Award. As per tradition, the alum receiving the honor throws out the first pitch during Paint the Park Purple at Cheney Stadium.

Barone grew up watching and playing baseball but hasn’t played competitively for years. “My girlfriend and I played a little catch the morning of the game,” he said. Barone’s practice paid off. He threw a strike, one rumored to clock in at 92 miles-per-hour. “Yeah, I don’t think so, but it sounds good,” he said. “I like that rumor.”

Much has changed for Barone since he earned his degree in computer science. For four years, he plied away on a game that would become the indie smash hit Stardew Valley. The farming simulation role-playing game has sold nearly four million copies since its release in 2016.

Barone’s achievement turned him into something of a celebrity. GQ did a lengthy spread on him complete with stylized photography. He gets regular messages from fans across the globe. This level of attention could be detrimental but Barone is taking it in stride. “When it first happened it was kind of a shock and it took me awhile to get used to it, but I quickly fell back into my old way of life, and the old way of thinking about things,” he said.

Long before becoming a successful entrepreneur, Barone was a kid playing Super Mario World with his friends in Auburn. “That was really the first game I got into and I have fond memories if it,” he said. Barone enjoyed video games but didn’t necessarily see it as a career. “I took a programming class at Green River College and really liked it,” said Barone. “I thought I could get a job in computer science but really didn’t know what I wanted to do.”

Barone transferred to UW Tacoma after completing his associate's degree at Green River College. “I liked the atmosphere here,” he said. “It suited my personality better. The campus, and Tacoma in general, has a more Pacific Northwest feel to it than other places.”

While at UW Tacoma Barone took his first forays into game development. “I took what I was learning in class and used that to develop little side-project games,” he said. “I think those little games ultimately gave me the confidence I needed to make a complete game.”

Barone spent years building Stardew Valley by himself. The game’s success created opportunities he didn’t have before. For starters, Barone has hired two employees to help him develop new content for Stardew Valley and provide input into the next game. “We’re accomplishing way more than I possibly could on my own,” he said.

As with notoriety, being the person in charge hasn’t affected Barone too much. “I don’t see myself as the boss,” he said. “I provide the vision and we work together to make it happen.” This cooperative philosophy is at the heart of Stardew Valley. “There isn’t violence or combat or anything like that,” said Barone. Instead, players strive to build a life for themselves while improving their community and bringing “magic into the world.”

"The community that's formed around Stardew Valley, it's seriously one of the best in all of video games. The people there are very welcoming, very friendly and kind.”  — Eric Barone

This message has found an audience and its response is not lost on Barone. “It’s really humbling to think that I’ve touched people in a meaningful way,” he said. “I’ve heard from people who say that the game has transformed their life and that’s something I feel really good about.”

Video games are, in a way, valuable practice for real life. Players fail — once, twice, ten times — before reaching their goal. The analog world is similar. People struggle and face setbacks before achieving what they set out to do. “There’s a balance you have to have between being very critical of yourself and your work while also maintaining a strong faith in your own ability,” said Barone. “Your unique voice and perspective matter and if you can find a way to bring that out then you will create something special.”