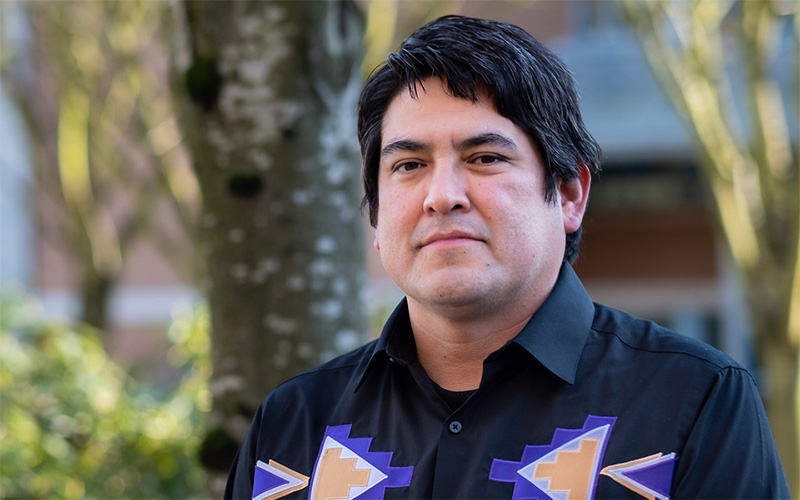 Gabe Minthorn plans to use the skills he developed as a coach and educator in his new role as tribal liaison.

Minthorn took up coaching when his playing days ended. The list of sports he has coached is almost as long, if not longer, than the list of sports Minthorn played. “I’ve coached everything from college football to high school baseball to middle school wrestling,” he said.

Minthorn is an enrolled member of the Confederated Tribes and Bands of the Yakama Nation. He’s also connected to the Umatilla and Nez Perce tribes. Minthorn grew up on the Confederated Tribes of the Umatilla Indian Reservation in Northeast Oregon. “Most of my favorite teachers were coaches,” he said. “I wanted to be a coach and be around athletics when I was younger, and I figured I might as well become a teacher so I could coach as well.”

Minthorn earned his associate’s degree from Blue Mountain Community College. Afterward, he transferred to EOU before deciding the campus wasn’t a good fit for him. Minthorn finished his bachelor’s in American Indian Studies at Haskell.

Minthorn moved back to the Pacific Northwest, specifically Portland. He had received an offer from the Graduate School of Education and Counseling at Lewis & Clark College. Minthorn had originally planned on attending a larger school so he could take advantage of the sports ecosystem. “I felt like I made the right decision by attending smaller schools because it’s what I needed,” he said. “I feel like those experiences and those relationships will help me going forward.”

Minthorn completed his master’s in teaching near the start of the 2008 financial collapse. “There were no jobs,” he said. Minthorn returned to Kansas and took a position with Haskell’s campus daycare. He remained in that role for three years before moving to New Mexico where he taught middle school and high school.

Coaching is about more than Xs and Os. It is true that coaches try to get the most out of their players, but this isn’t easily achieved if there isn’t trust. Players need to know their coach cares more about them than about winning. Building skill and building confidence go hand-in-hand. The same is true of teaching.

Minthorn came to Tacoma in the fall of 2019. He took a job teaching social studies at Illahee Middle School in Federal Way. “As a teacher, I really try to serve as many students as I can and try to change trajectories,” he said. “Some of the students I’ve worked with, they didn’t have much direction or someone to support them or back them or even mentor them.”

This ethos carries over into Minthorn’s role as Tribal Liaison. “The ultimate goal that I presented to the interview community was serving the students and helping them get to that moment when they walk across that stage and get their diploma,” he said.

Minthorn started in this role about three months ago. The details are still coming into focus, but he has a foundation on which to build — trust. Minthorn plans on cultivating existing relationships with area tribes while establishing lines of communication with others. “I want to go out and talk to students and talk to their families and let them know that we’re here,” he said.

The pandemic has complicated matters but Minthorn is developing ways to reach out to these communities whether that is through Zoom meetings or virtual college tours. The coach/teacher in him knows the importance of connection. “So much of what I do is about access and actually getting students to step foot on a campus, to see it and touch it,” he said. “That’s what it comes down to and we need to find ways to make this same level of connection, especially now.”