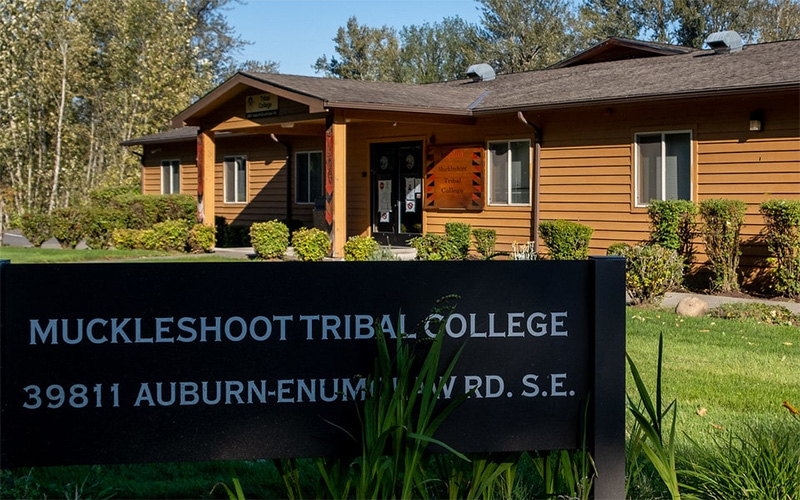 UW Tacoma Educational Leadership Director Dr. Robin Starr Zape-tah-hol-ah Minthorn hit the ground running. She started at UW Tacoma in mid-August of 2019. Four weeks later she received an email from the Muckleshoot Tribal College’s Amy Maharaj. “She was looking at graduate programs to see what we offered in the School of Education,” said Minthorn. “I was really excited because I wanted to connect with local tribal communities but was waiting until I’d spent more time in Washington.”

Minthorn along with the School of Education’s Ashley Walker set up a meeting with Maharaj and Muckleshoot Tribal College Executive Director Dr. Denise Bill to discuss bringing a doctoral program to the tribal college.

The tribal college started back in 1997. “We’re a partner-based institution,” said Bill. “We bring in different institutions from time to time to offer programs that we think will help our tribal members.” For example, the college has teamed with Renton Technical College on a certified nursing assistant program as well as a carpentry program through Green River College.

The tribal college first approached UW Tacoma leadership about five years ago with the idea of creating an MBA program. “We were really close to making it happen, but it just didn’t come together,” said Bill. Even though those meetings didn’t produce a desired result, they did help establish a relationship. “I kind of feel like that experience paved the way for the Ed.D. program,” said Bill.

Minthorn was aware of this recent history and knew she wanted to be very intentional about cultivating a relationship with the tribe. This thoughtful approach extended to even small details like where meetings would be held. “I wanted to make sure that it was us coming to them as much as possible and not the other way around,” said Minthorn.

Minthorn, Walker along with UW Tacoma Associate Professor Michelle Montgomery spent the next few months meeting with different Muckleshoot Tribal College employees, prospective students and community members. The trio, along with Bill and Maharaj, ultimately decided to focus on bringing the Ed.D. program to the tribal college.

Denise Bill completed her Ed.D. at the University of Washington College of Education on the Seattle campus in 2012. “I was actually the second Muckleshoot to get a doctorate degree from UW in Seattle,” she said. “My dad was the first and he was also the first Muckleshoot to earn a doctorate.”

According to Bill, 13 members of the Muckleshoot tribe are going to one of the three UW campuses this fall. “That’s up from seven last year,” she said. “Overall, we have about 150 Muckleshoots who are going to college somewhere right now.”

Minthorn holds a Ph.D. in educational leadership and policy studies from Oklahoma State University. She had some bumps along the way, including be placed on academic probation at the end of her freshman year. Minthorn persevered and is now a passionate advocate for representation in higher education “Native students are the least represented in all levels of education,” she said. “Less than one percent of Native students graduate with a doctoral degree.”

The Muckleshoot Tribe and UW Tacoma’s School of Education signed a memorandum of agreement (MOA) in February. “This partnership aligns with our school's conceptual framework, ‘to prepare ethical and reflective educators and leaders who transform learning, contribute to the community, exemplify professionalism, and promote diversity,’” said UW School of Education Dean Rachel Endo.

Central to the MOA is the concept of Indigenizing higher education. To put it simply, this means centering Native experiences and perspectives in both the curriculum and the classroom. “We are providing Indigenous scholars and Indigenous scholarship for students to read throughout all of their classes,” said Minthorn.

That’s just one way this idea is being brought to fruition but there are others. “The cohort is being primarily taught by Native American instructors which is significant because it sets expectations and protocols regarding how Indigenous cultural knowledge should be shared in this professional learning environment,” said Endo.

More than 50 people expressed interest in the Indigenous-based Ed.D. program. Of that group, 15 were selected to be part of the inaugural cohort. The pandemic changed some things, namely where classes would be held. The original plan was to hold classes at the tribal college. Instead, classes are happening over Zoom with the hope of eventually being able to meet in person.

Classes started in late June. Minthorn taught over the summer as did Montgomery. “I taught a course called Diversity in Education and in the autumn, I’ll be teaching a course in applied research,” said Montgomery. “Robin felt, and I agreed, that it would be important to have two Indigenous faculty jump-starting the program.”

Montgomery came to the Pacific Northwest about 10 years ago. Like Minthorn, she jumped right in and started making connections. “I’ve had a relationship with the Muckleshoot community for some years now,” she said. “Dr. Bill is someone I view as a mentor; I highly respect her, and she’s always welcomed me with open arms.”

Community is important to Montgomery, as is respect. The decision to hold most of the courses on Muckleshoot land is more than just a symbolic gesture. “Colonialism states that from a very white institutional academic model you must learn in our institutions, in our classrooms, that is the way it’s structured,” said Montgomery. “But you decolonize that entire platform when you move outside of the Western paradigm and take it to the community.”

In this sense, it’s helpful to think of these old systems as walls. These barriers assume there is only way one to learn and, by doing so, discourage those with a different understanding of the world and how it works. “I think if we’re going to increase the number of students that we have on our campus that are American Indian, First Nations or Alaska Native, an Indigenous population that is less than 2%, we really need to do more community building,” said Montgomery.

Ashley Walker is the academic advisor for the Ed.D. cohort. She’s been involved with the process of creating the MOA from the beginning. Her role as academic advisor has been an essential part of the support needed for the Ed.D. program which includes the Muckleshoot cohort. “I think my focus now is to provide as much support as possible for students by assisting with the navigation of academia, guidance on available resources and confirming that the Ed.D. program and community needs them,” said Walker.

Walker’s experience working with everyone on this tribal partnership had a lasting impact. “It really opened my eyes to a community rich in culture and history that also struggles with systemic disproportionately and lack of resources,” she said.

This insight informs Walker’s role as advisor. “It was important to me to understand the perspective and lived experiences of our students and community partners,” she said. “I’m here to help them get what they need and the first step in that process is conversation.”

Minthorn hasn’t stopped running. It’s still early, but there’s already conversation about adding more programming with the Muckleshoot. “They’re interested in bringing our Master of Education program to their campus,” she said. “We sent out a survey to tribal members and we got a lot of responses who are interested in the idea. I definitely think that there’s opportunity for us to develop something over the next year or next couple of years, but I want to emphasize that our work is led by the timeline and needs of the Muckleshoot community. Everything we’ve done has been co-created from the admissions process and dates to the times for when courses would be offered.”