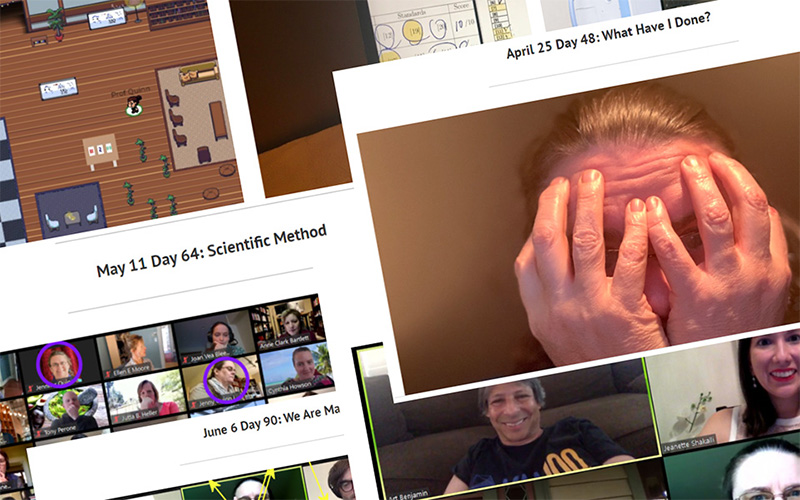 Math in the Time of Corona

For the past year, math professor Jennifer Quinn has been writing a blog about teaching mathematics and living during the pandemic.

Anniversaries are dates on a calendar, sure, but they’re also markers, little yellow arrow-shaped tabs in our story. Unlike the never-ending everyday that lives for a moment and is then forgotten, anniversaries are perennial moments that bloom in our consciousness at least once a year.

Well, there are as many reasons as there are people. However, if we could distill this idea down to something basic, maybe it’s as simple as meaning. What happened on a given day at a given time meant something to us.

March 6, 2021, marked the one-year anniversary of UW’s decision to switch to a remote model of instruction. March 6, 2020 was a Friday. By Monday most classes at all three UW campuses were being held remotely.

Jennifer Quinn had some experience with remote classes. She started using Zoom two years ago after a February snowstorm made getting to campus difficult, if not impossible. “I’d been using Zoom for remote board meetings and I thought I’d see if we could use it for class,” she said. Quinn reached out to the campus's Information Technology department to see if this were possible. “They had it up and running in about 15 minutes,” said Quinn. “I sent the link to my students and about a quarter of them Zoomed in.” Quinn has embraced the flexibility that platforms like Zoom provide. She now simulcasts and records her classes.

Quinn’s experience proved useful when the pandemic forced universities across the country to rapidly switch to an all-online format. Quinn is active in the larger world of mathematics. Among other positions she’s held, Quinn took over as president-elect (she became president in February 2021) of the Mathematical Association of America (MAA) just as COVID started to spread in the United States. The organization has a platform called MAA Connect that allows members to post and talk with each other. Quinn started writing about her experience with teaching via Zoom. These writings eventually turned into a blog Quinn developed called “Math in the Time of Corona.” “I really felt like I could use this medium to help my professional community make the transition to remote teaching,” she said.

Quinn started writing her blog to fill a need and planned to stop when that need had been met. It’s been more than a year since the pandemic started and Quinn is still adding new posts every day. “I don’t think any of us could have fathomed that we would still be doing this a year later,” she said.

Quinn’s blog is both a professional document and a frank discussion of one person’s life during the pandemic. The range of topics covers everything from developing alternative assessments to learning how to connect with students over Zoom to the anxiety and stress of life in lockdown. “I’m a New Englander and tend to keep my emotions to myself,” she said. “This isn’t one of those experiences that you can get through by ignoring it.”

In some ways, Quinn’s writing achieves one of her larger goals. By letting people into her world, Quinn is able to show multiple sides of herself and not just the professor or mathematician. “I think it’s important to make mathematics more humane so that we see the profession is not just about solving problems and getting answers, but it’s about creating mathematicians and helping people see themselves as mathematicians," she said.

Quinn didn’t necessarily envision a career in math when she started at Williams College in Williamstown, Massachusetts. “I went to college thinking I’d be a physicist or an actress, one of the two,” she said.

Quinn started taking math classes to fulfill physics requirements. She may have gone into that field if not for one faculty member. “Every time he saw me he’d go ‘you’re really good at this, you should take another math class,” said Quinn. She took the advice and graduated with a double-major in mathematics and biology.

A few years later Quinn completed her master’s degree in mathematics at the University of Illinois, Chicago. She followed that up with a Ph.D. from the University of Madison, Wisconsin. Quinn then transitioned into a faculty role at Occidental College in Los Angeles where she spent more than a decade including three years as chair of the school’s math department.

Quinn came to UW Tacoma in 2007. In the subsequent 14 years, she helped create the campus’s math minor and, later, its math major. Quinn also served as interim director of the Teaching and Learning Center, interim associate vice chancellor for Academic Affairs as well as associate director of the School of Interdisciplinary Arts & Sciences.

This is just one part of a larger equation. Quinn is a noted scholar in the field of combinatorics. “Combinatorics is all about understanding patterns, deciding if they are real if they exist, and then counting them,” she said.

Quinn is using her expertise and influence to change the culture of mathematics. This mission starts locally, both in the classroom and in the community. Quinn is active in the Tacoma STEAM Learning Network which aims to expand access to “Science, Technology, Engineering, Arts, and Mathematics for all Tacoma students.” She is also part of the working group #TacomaMath which aims to build a connection to community through math.

This philosophy informs how Quinn teaches her courses. “I believe each person comes as an individual and not everyone has been set up for success before they get here, but that doesn’t mean they can’t succeed,” she said. Helping students succeed means refraining from lecturing too much. Instead, Quinn works to get students involved and working with each other. “I like to have an active classroom,” she said. “You cannot learn mathematics by watching.”

Nationally, Quinn is using her position with the MAA to push for more inclusive practices. The organization puts out curriculum guidelines that are used by schools and universities across the country and, as such, can move the needle when it comes to how math is taught. “It’s really important, especially in this day and age when we’re centering anti-racist work to be very explicit with what is appropriate and what is allowed and what should not be tolerated,” she said.

It’s hard to imagine, or maybe it’s something we don’t want to picture for fear of getting our hopes up. Either way, another anniversary is coming, but the date isn’t set yet. This is the day when we’ll be able to see our friends, family and colleagues again in-person and without masks. Until then, we can still connect with each other through Dr. Quinn’s blog and her individual experience that touches on the ups and downs we’ve all felt in the past year.

A year ago at this time, none of us would have imagined the role that technology and virtual environments would play in our lives and especially in our learning environments.

Dr. Jennifer Quinn has been elected to the board of directors of the Mathematical Association of America.