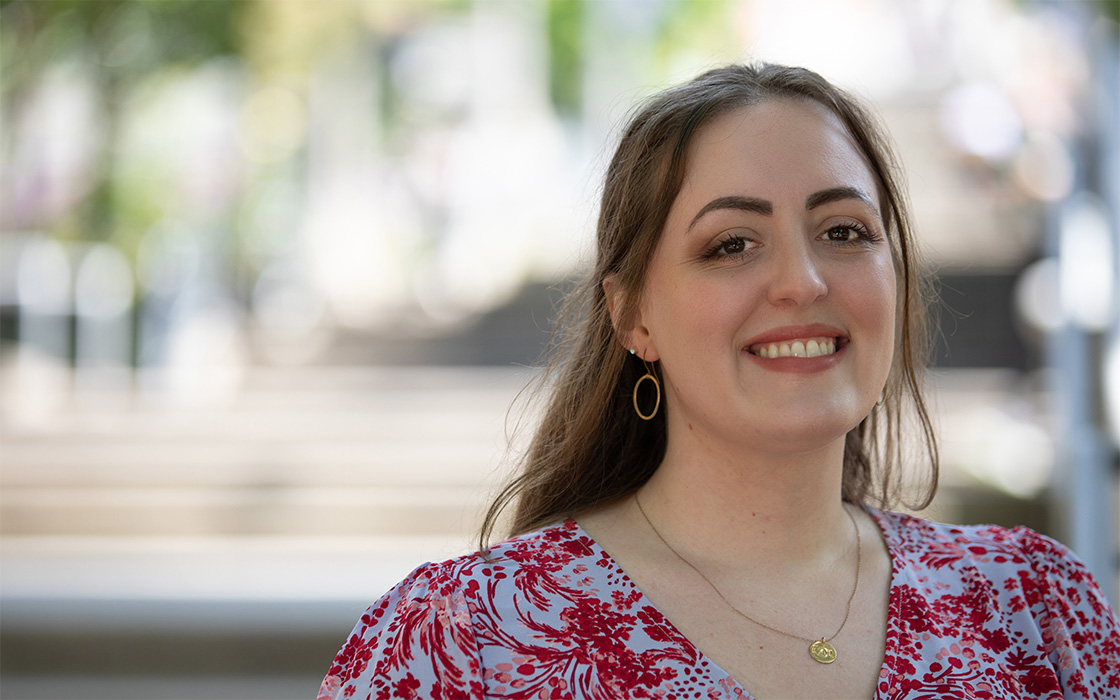 Melissa Nunez: Knowing Who to Ask

A first-generation college student graduating with a degree in nursing, Melissa Nunez found that help is available for the asking, if you know who to ask.

Melissa Nunez looks forward to graduating.  A nursing major, Nunez’s long hours of studying and working in the medical field are paying off, and she looks back with a sense of accomplishment. “I'm excited about it, and my family's excited about it,” she said.

Nunez’s journey to UW Tacoma has been years in the making due to early independence, working, and juggling motherhood. Nunez left home at age 17. “My home life was not a place that I wanted to be anymore, I didn't feel like it was a safe place for me, so I left,” she said.

After leaving home, Nunez worked and finished high school through a program in the North Kitsap School District, where she attended weekly meetings with a teacher and did assignments from home. Nunez had to navigate the world on her own and that included looking after herself and her younger brother. “When I was 20, he was 18,” she said. “So, right after he graduated high school, he moved in with me.”

When reflecting on her life and experiences, Nunez admits her road to school hasn’t been the easiest especially as a first-generation college student. “It took so long to get back into higher education because I didn't have anybody who knew the process,” she said. “It’s been difficult, but it seems like most places are willing to give help if you ask for it. It's just knowing who to ask -- that’s been hard.”

Like many young adults who work and who want to attend college, Nunez waited for financial stability before making her move into higher education. “I had always wanted to go back to school, but I had done a lot of moving around, and wasn't ever in a position where I could,” she said.

At the age of 27, Nunez’s dream of going back to school became a reality. Her husband started a new job which enabled her to work less, and focus on her educational goals. Nunez enrolled at Olympic College where she studied prerequisites for nursing and received her associate’s degree in 2019. This degree enabled Nunez to gain experience in the field. Her first position included working as a nurse at St. Joseph Medical Center in its trauma intensive care unit.

In the fall of 2021, Nunez transferred to UW Tacoma to continue on her nursing path. She credits her passion for nursing to her interest in science, medicine, and people. “I chose nursing because I felt like you can do anything,” she said “There's such a wide variety of places that you can go.”

The University of Washington was always a top choice for Nunez. “I grew up in western Washington, and UW is one of the best schools around, so the opportunity to attend was really up there for me,” she said. “I think that UW has a lot of focus on diversity, which I really value, and UW Tacoma is close to where I work and live.”

Nunez admits to feeling intimidated before starting at UW Tacoma, but she is happy with her decision to complete her program here. She credits her professors with being approachable and available when needed. Nunez is also grateful for coursework that she felt applied both to her personal and professional life.

Nunez is currently working at Tacoma General Hospital in the cardiovascular intensive care unit, and with a critical care transport team. “I tend to do a bit of everything,” she said. Nunez’s work has its share of stress, especially during the pandemic as she serves patients who are dealing with a variety of issues, “For the past year I've been doing critical care transport with Olympic Ambulance,” she said. “We take patients that need observation overnight, patients who have mental health issues, pediatric patients, and patients who are really ill and requiring constant monitoring.”

Nunez has enjoyed her experience working in the healthcare field. “Being able to see the pre-hospital and intra-hospital perspective and get a bigger-picture view of systems -- I've really enjoyed that,” she said. There are days where Nunez pulls all-nighters, and others where just a small number of calls come through. The variable aspect of her job is what she enjoys the most, and it gives her the ability to complete assignments during downtime at work. Nunez’s job’s flexibility also allows her to spend more time with her two-year-old daughter and husband.

Nunez is part of the School of Nursing & Healthcare Leadership BSN curriculum committee where she provides valuable input on the course curriculum. The committee meets monthly throughout the school year. Students who are on the committee provide feedback to their professors in their program. “It's nice to be able to have a voice as a student, because I feel like you don't always get that opportunity”, she said.

What’s next for Nunez after she receives her degree? She has applied to the master’s program in nursing at UW Tacoma, and has thoughts of becoming a clinical instructor or adjunct faculty while continuing to work with patients. Nunez is looking forward to her next chapter after graduation. “Everybody's really proud of me for just persisting through and being able to finish,” she said “I'm 34 and finally getting to that point where I can say that I did it, and I completed it. It's been a very long road, but I've finally gotten here.”