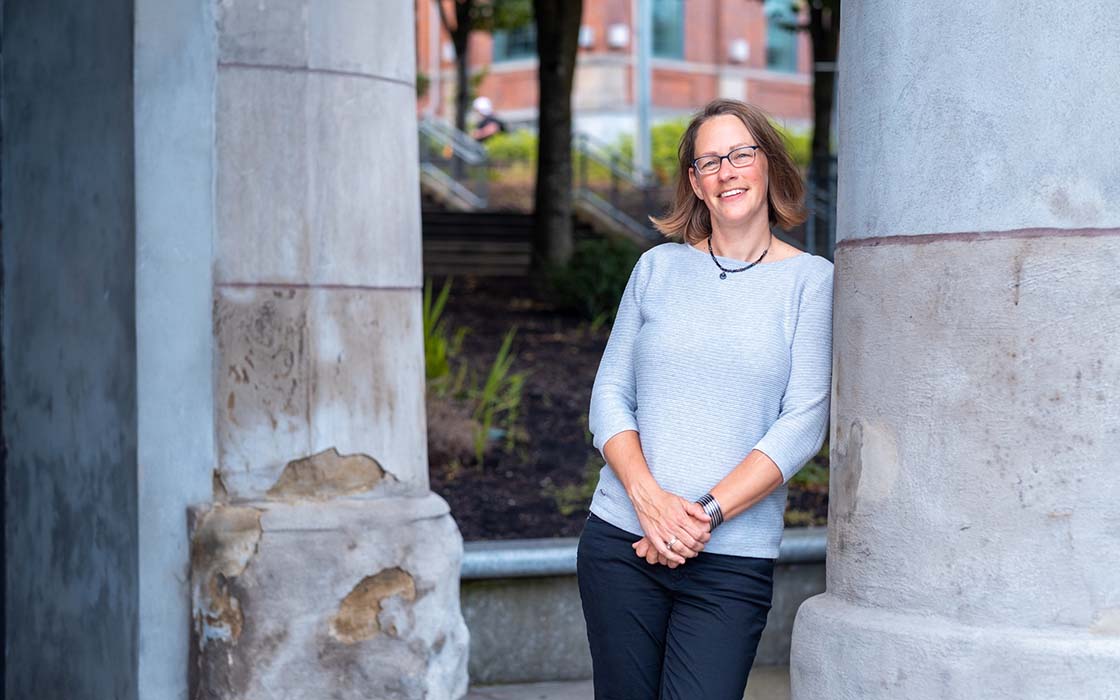 Annemarie Martin's desire to study abroad ultimately led her to UW Tacoma as both a student and employee.

Things are really starting to add up for Annemarie Martin.

Born in the Netherlands, Martin grew up in the small town of IJsselmuiden. Her father managed a company that focused on providing people with affordable housing. “My mom was a dental assistant for a while, but she left so she could stay home with my brother and me,” said Martin. “She went back to that career later on when we were older.”

Distance is different in Europe than in the United States. “Over there I could be in Germany in two hours or Paris in six,” said Martin. The U.S., particularly the West, is vast and sprawling. Martin took advantage of the Netherlands’ proximity to other countries. “I grew up traveling and spent a lot of time in places like France, Germany and Switzerland.”

Those early experiences with travelling seeded a lifelong interest within Martin. By the time she reached high school Martin knew she wanted to travel to the U.S. as part of a study abroad program. The only problem — her age. The education system is different in the Netherlands. Students generally start college around age sixteen. “My dad thought I was too young to go abroad,” said Martin.

Study abroad changed Annemarie Martin's life. That kind of activity in higher education is known as a "high-impact practice," and study abroad is just one.

UW Tacoma's study-abroad programs are administered out of the Office of Global Affairs, and include shorter-term sessions where students travel out of the U.S. for a portion of an academic quarter. UW Tacoma students can participate in study abroad programs offered at UW in Seattle as well.

Martin put her plans on the backburner and focused on her education. “I decided to become a math teacher,” she said. “I started taking the courses and I was miserable.” Martin eventually switched and decided to pursue a degree in marketing. “It wasn’t necessarily a passion, but it’s what I ended up doing.”

As graduation approached, then-22-year-old Martin saw an opportunity to fulfil her desire to study abroad. She broached the idea with her father again, this time he approved. As she recalled, “He said, “Let’s do this, because otherwise you’re going to find a job and be an adult and have responsibilities and won’t be able to.’”

Martin looked at a number of programs but ultimately chose to attend Green River College in Auburn, getting involved with the International Programs Office. She participated in activities and was eventually hired as a student marketing assistant. Green River is also the place where Martin met her future husband. “It was the best year of my life,” she said. “I got out of my comfort zone, and I think that experience really helped me figure out who I am.”

Martin returned to the Netherlands but continued working for Green River while overseas. “I got my green card and came back,” she said. “I ended up working full-time for the college as a program assistant in the Intensive English program.”

Martin goes back to the Netherlands every year or two, but she feels more at home in the Pacific Northwest. “I like the diversity here,” she said. “I also think that people are more respected here for who they are.”

Martin left Green River for a position at Tacoma Community College (TCC). “I wore a lot of different hats at TCC,” she said. “I placed incoming international students into home stays, and I was a coordinator for short-term study abroad programs,” she said. “I was also the main immigration advisor which meant making sure everyone in our department was aware of the ever-changing regulations.”

It’s been seven years since Martin came to UW Tacoma. “I was hired as an advisor for international students,” she said. Martin currently works in the Milgard School of Business as the Program Manager for the Center for Leadership & Social Responsibility and the Center for Business Analytics. “I’m passionate about higher ed,” she said. “I really enjoy working directly with students and just seeing the relief on their faces when I help them with what they need.”

Martin is a staff member at UW Tacoma. She’s also an alumna as well as a current student. Martin earned a degree from UW Tacoma in global studies and just started work on a Master of accounting. “Numbers make me happy,” she said.

It’s hard to resist the metaphor of life as an equation. Both have unknowns that have to be solved. Those unknowns are unclear at first, but when they come, the answer appears. Martin’s answers started coming when she participated in a study abroad program. That first variable set her down the path to find the next one and the next until ... voilà. “I love accounting,” she said. “I’m going to finish my degree then take the CPA exam. After that, we’ll see.”