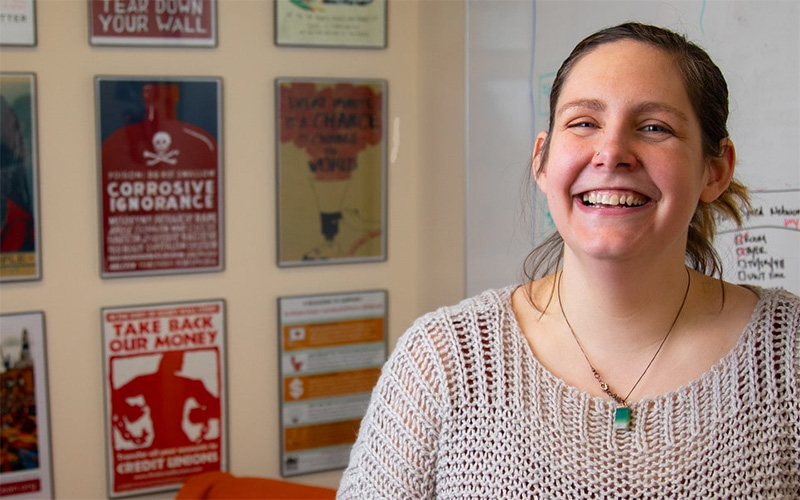 Legal Pathways Director Patricia Sully is using her skills as a trained lawyer to turn UW Tacoma into a hub for legal education in the South Sound.

Patricia Sully emerges from a small, two person tent. The shelter isn’t in a state park and Sully won’t be roasting marshmallows or singing campfire songs anytime soon. For that matter, Sully isn’t dressed in flannel and jeans. “I’d climb out of my tent in a business suit and brush off the hay and walk to work,” she said.

The tent is pitched in downtown Seattle. The year is 2011 and the Occupy Seattle protests are at their peak. Sully and other attorneys are helping coordinate legal defense for protestors who’ve been arrested. The work entails long, odd hours, food on the fly, days without showers and pepper spray. “I was standing on a curb and they [Seattle Police Department] came to clear people out of the street and I got pepper sprayed,” said Sully. “I remember being pulled away by street medics and just crying because it hurt so badly.”

Sully’s passion for the law and its potential for good may help explain her willingness to uproot her life and spend several months working with the Occupy movement legal team. “I’ve always had this very strong social justice interest and wanted to do work that was meaningful and that helped alleviate injustice,” she said.

Born and raised in Pittsburgh, Sully attended Calvin University in Grand Rapids, Michigan. Sully’s choice of major — Ancient Greek — happened almost by happenstance. “There was this boy I had a crush on and he was taking an ancient Greek class,” she said. Sully signed up for the class and, as it turns out, had a knack for the language. “It is like a really weird puzzle and I just happen to enjoy puzzles.”

Following graduation Sully stayed in Michigan. She took a position as a community organizer for a free health care clinic and neighborhood association. “I knew I wanted to do things that helped people,” said Sully. The then-twenty-something stayed in this position for about a year before briefly returning to Pittsburgh, then departing for Botswana as part of the Peace Corps. “I worked primarily with women who are living with HIV and who are pregnant,” said Sully. “There’s still a fair amount of economic disenfranchisement of women in Botswana and so a lot of what I did had to do with increasing opportunity for women in these villages.”

While in Botswana, Sully began prepping for the next phase in her life — law school. “I took the LSAT and did law school applications while still in the Peace Corps,” she said. Sully got accepted to Seattle University School of Law and started work on her degree soon after returning from overseas.

Sully began law school in 2008 with the intention of pursuing international law. She spent a semester at the International Criminal Tribunal for the former Yugoslavia. The economic collapse which began in the fall of 2008 rippled across different sectors. “There was a significant retraction in the legal market,” said Sully. “Also, I came to realize that international law wasn’t actually a good fit for what I wanted to do.”

Sully holds a law license in Washington and New York. However, her first job post-graduation was at the Seattle University School of Law. “I was fortunate to receive a Scholars for Justice scholarship, which is a full-tuition scholarship, but I was watching my classmates graduate with extremely high levels of debt into a job market that was largely nonexistent,” said Sully. Never one to hold back, Sully fired off an “angry” 3 a.m. email to the dean of the law school about this issue. “He replied about an hour later and asked to see me later that day,” said Sully.

As it turns out, Sully’s message resonated with the dean. “He created a job for me,” she said. Sully helped develop initiatives to decrease student debt and increase opportunities both during and after law school. She later transitioned into the role of Assistant Director for the Access to Justice Institute at Seattle University. “The center supports students who are interested in going into public service,” said Sully.

It’s here in the story that we return to the beginning, the tent and the pepper spray. Sully met and struck up a friendship with the Public Defender Association’s executive director, Lisa Daugaard. (Side note: in 2019 Daugaard was awarded a highly coveted fellowship from the MacArthur Foundation, the so-called “genius grant.”) Daugaard was impressed with Sully’s legal acumen and offered her a position with the association.

Sully started as a staff attorney. At the time of her hiring, the association had just launched a pilot program called Law Enforcement Assisted Diversion (LEAD). “The program works with people who have criminal justice involvement and struggle with substance use disorder,” said Sully. “The vast majority of referrals are folks who have been unhoused for a long period of time.”

LEAD has since been implemented in various jurisdictions across the country. Sully transitioned into the role of policy director with the association. Among her campaigns, she pushed leaders in Seattle to create safe consumption sites.

Sully came to the UW Tacoma campus in August 2019 to become director of Legal Pathways (LP). In the spring of 2018 Washington Governor Jay Inslee signed a $1.2 billion supplemental budget into law. The budget included $200,000 for UW Tacoma to develop law-related events and programming. Assistant Professors Sarah Hampson and Elizabeth Bruch served as co-interim directors until Sully came onboard.

Sully built off the foundation created by Hampson and Bruch. “This year I’m really focused on building core programming,” said Sully. Programming, in this case, means LSAT preparation classes, personal statement workshops and events that focus on funding for law school, just to name a few. “We’re always going to need these sorts of information-based offerings,” she said. “A lot of our students are balancing work and school, so one of our goals is to create an online repository that will be available to students who can’t attend in-person sessions.”

Part of LP’s founding philosophy includes an emphasis on turning UW Tacoma into a hub for legal education in the South Sound. Sully is accomplishing this task in different ways. For starters, she’s bringing legal professionals to campus to speak. Legal Pathways recently hosted the Washington State Sentencing Guidelines Commission and the Northwest Immigrant Rights Project. Sully has also developed more intimate programming.  “We’ve been working with local attorneys on a series of lunch-and-learns,” said Sully. “The idea is, there’s a different attorney on campus each week talking about their practice area in a small-group environment.”

The focus on relationships is intentional for a few reasons. “One of the stated problems from the legal community in this area is that so many students leave Tacoma to go to law school somewhere else,” said Sully. “The more we develop those relationships with attorneys here in the South Sound, the more likely those students will come back here to practice.”

Building community also helps generate opportunities for students in the form of internships. “I want to create a cohort model with Legal Pathways Fellows,” said Sully. “A more structured program would benefit those students who want to dive in to a deeper level.” In Sully’s vision, the development of summer internships with nonprofits or service organizations would be essential. “This would provide valuable experience and would provide students a chance to give back to the community.”

Patricia Sully is familiar with tents. The one out of which she provided free legal assistance was small, but Sully’s desire for the profession is much larger. Sully believes that tent is big and is here to make sure those who want in have the chance.