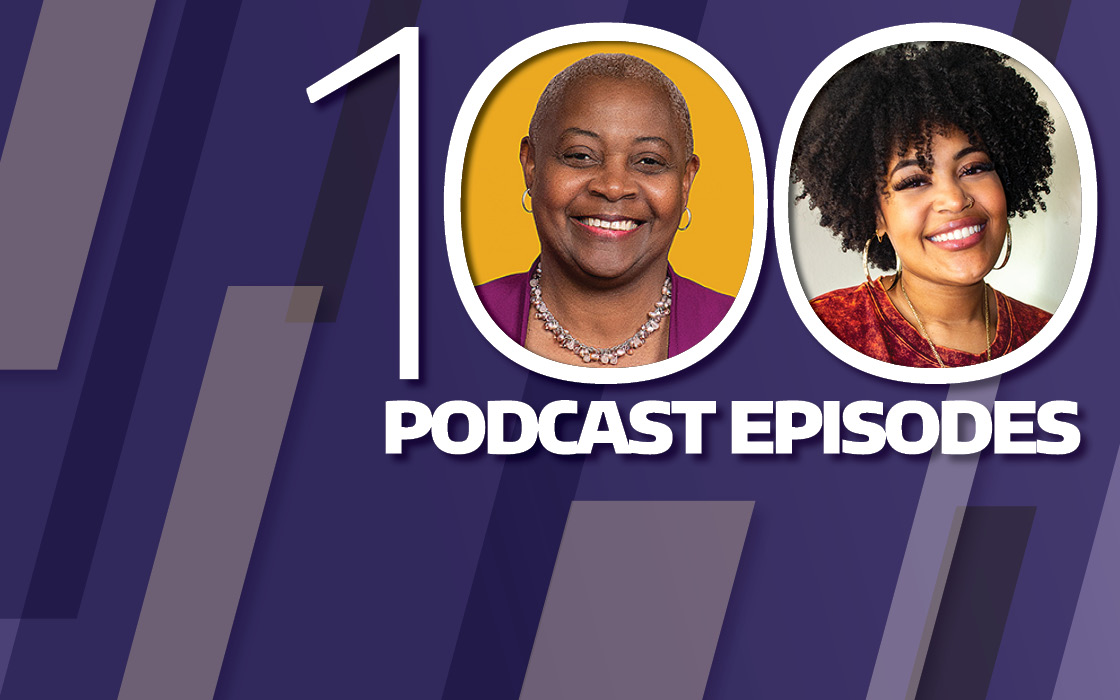 Chancellor Sheila Edwards Lange and alumna Jazmyn Pratt talked about their college experience, higher education and the future of UW Tacoma for the 100th episode of Paw'd Defiance.

“Chancellor” is a big word, an imposing title that suggests power and status. Make no mistake, a chancellor, whether they are the leader of a country or of a university, is a person with authority. However, no two chancellors are alike. Some may indeed “rule” over their perceived subjects while still others would prefer, even if decorum suggests otherwise, that you call them by their first name.

UW Tacoma Chancellor Sheila Edwards Lange belongs in the latter camp. Chancellor Lange has the curriculum vitae you’d expected of someone in a leadership position. However, what sets this Chancellor apart is her ability to connect with people.

UW Tacoma alumna Jazmyn Pratt has the same ability. Pratt graduated from UW Tacoma in 2012 with a degree in communication. The Tacoma native now lives in Los Angeles where she works as the manager for a property management company. This is Pratt’s job, but her passion is helping to create content for BLKWINS, a project she co-founded wither her brother Aaron, artist Perry Porter and marketing tech Chris Lee Hill. BLKWINS, as Jazmyn Pratt puts it aims to “talk about the wins [of Black history,] about important things and events that aren’t covered.”

Pratt acts as host for the videos BLKWINS creates. The thirty-something has worked in radio and currently hosts her own show on Rainier Avenue Radio.

The UW Tacoma podcast Paw’d Defiance started back in April of 2019, thanks to a grant from the Strategic Initiative Fund. During that first episode, UW Tacoma Associate Professor Danica Miller interviewed her father, the Puyallup Tribe of Indians Tribal Chair Bill Sterud. UW Tacoma sits on ancestral lands of the Puyallup, so it seemed fitting that a podcast aiming to tell the story of this community should start with a discussion of the people who have lived here for centuries.

We have talked about a lot in the last three years – dinosaurs, microplastics, robots, nostalgia, racism, COVID-19, motherhood, grief and just about everything in the between. For episode 100 we decided it once again made sense to hand over the microphone, this time to Jazmyn Pratt. We asked Pratt to interview Chancellor Lange, but it ended up less a formal question and answer session, and more a conversation between two people who’d never met, but talked like they’d known each other for years.

Excerpts have been edited for clarity.

Jazmyn Pratt: Can you talk about your upbringing?

Chancellor Lange: So, I am the first in my family to go to college. I was born in Mississippi but when my parents divorced when I was 10 we moved to Los Angeles. My mom became a single parent, at that point with four children, and then she also raised one of my cousins. I became the oldest child of a single parent living in subsidized housing and on federal assistance.

Jazmyn Pratt: I actually have a very similar background. My mom was also a single parent, and she raised one of my cousins. Did you go straight to college after high school?

“For me, education was really the way to break the cycle of poverty.”

Chancellor Lange: Yes, and I don’t even know how I did it. I went to college not really understanding how to make the college choice. So, I ended up at UC Irvine, but navigating that, just trying to make the right decisions around courses, and trying to understand the right major that I should be in and really trying to understand how to manage money. I struggled more with managing money that anything else because I sent my financial aid check home to my mom and then realized I didn’t have enough money to pay for my own housing or food. I recognize now that I was food insecure and housing insecure throughout my undergraduate education.

Jazmyn Pratt: Honestly, a lot of students have their own financial struggles. I worked at Burger King for four years throughout my undergrad. I needed to be able to find a job that, hey, if I have finals, I might have to call out. You couldn’t do that in a lot of other jobs, so I totally understand the struggles with undergrad.

What is your vision for UW Tacoma?

“I think that UW Tacoma can be the best regional urban serving university in the country.”

Chancellor Lange: We've got to start telling our story. We've got to start recruiting students like you who are passionate about their futures and telling their stories more because the more that we can talk about the quality of our students and the amazing things that our graduates are doing, I think the more that we will attract similar students to UW Tacoma. In some ways, we're like the best kept secret in the South Sound or in the state. I think that people in Tacoma know about UW Tacoma but, but as you get further away from Tacoma, there's not a lot that's known about our campus, and I think that we could be the destination of choice for students all over the state, if not all over the country.

Jazmyn Pratt: I agree. I think that it would be great to see expansion maybe even from other states, for people to come to the Tacoma campus and experience the greatness that UW Tacoma has to offer because I loved it and I’ve always told people that it was one of the greatest experiences I’ve ever had, and I will continue to say that.

You can hear the rest of the conversation between Chancellor Lange and Jazmyn Pratt. The two talk about the role of higher education in their own lives, the value of collaboration and the impact of the new Milgard Hall, just to name a few topics.