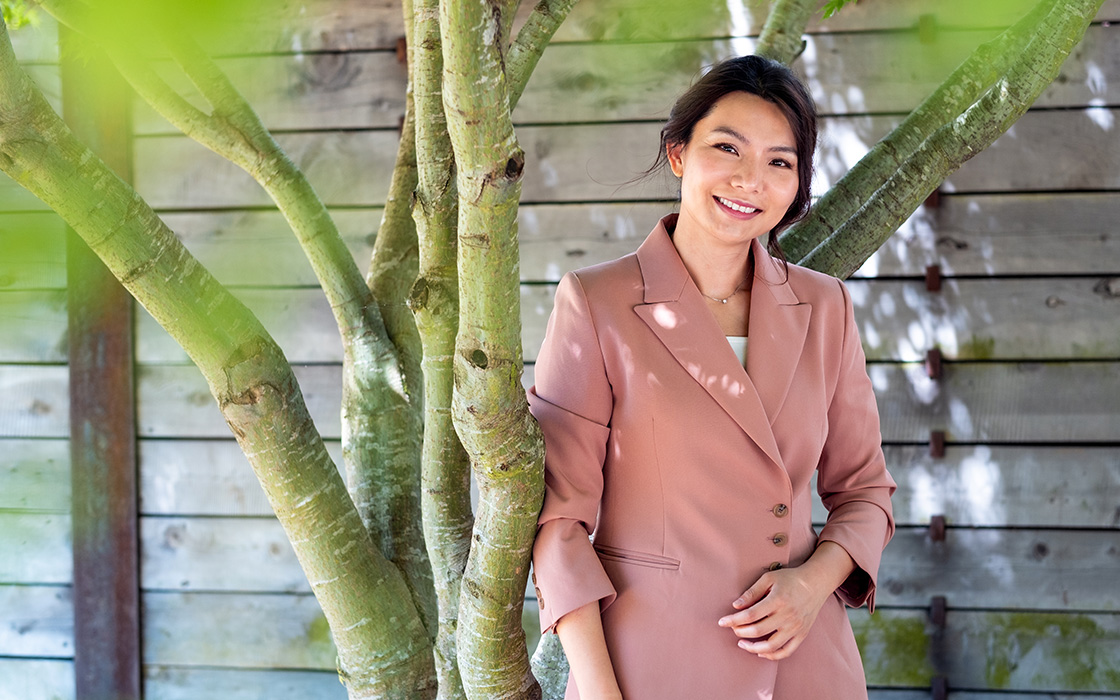 “I think of mental health like a tree,” says UW Tacoma Assistant Professor Chieh (Sunny) Cheng. “Mental health, like a tree, changes over time and is dependent on many factors including environment and how well it has been cared for. As a nursing scholar, I probably can’t change where the tree was planted, but I can advocate for equitable resources and develop ways to build up inner strength.”

Born and raised in Taiwan, Cheng’s interest in healthcare stems from an experience she had when she was six year’s old. “I had an elective survey that required an overnight stay in the hospital,” she said. “The nurse who took care of me that night made me feel I was in safe hands with her even when my parents were not around.”

When it came time for college, Cheng decided to major in nursing. She earned both a bachelor’s in nursing at Kaohsiung Medical University and a master’s in psychiatry and mental health nursing from National Cheng Kung University. During this period, she also worked as a psychiatric nurse in an acute care unit. “There’s a lot of stigma associated with mental health,” said Cheng. “I was able to see this during my work as a psychiatric nurse. Those living with mental health conditions were underserved and under-resourced.”

While in graduate school Cheng took part in a study abroad program that took her to UW Seattle. “I was fascinated by the number of opportunities here,” she said. Cheng returned to Taiwan at the end of her study abroad. “I knew I loved doing research and wanted to pursue a Ph.D. but wasn’t sure if I wanted to come back to the United States.”

Cheng’s mother ultimately influenced her daughter’s decision. “We talked and she suggested I step out of my comfort zone,” said Cheng. “She said, “We will be here if you decide to return home. Looking back, I think that’s part of the reason why I value family caregivers and family support so much.”

Cheng ultimately took her mother's advice and decided to branch out. She applied to and was accepted into the Ph.D. in nursing program at UW Seattle. The first few months were challenging. “I didn’t know a lot about the culture,” she said. “I started in the fall and it was wet and cold and I felt really isolated.”

Cheng started to acclimate thanks in large part to the support she received from university staff and faculty. “The experience reminded me to be kind and compassionate, but it also motivated me to research how social support can buffer the existing physical determinants of health.”

Cheng completed her doctorate in 2017. Her dissertation — "Using Grounded Theory Method to Explore the Process of Prodromal Experiences Prior to the Diagnosis of Schizophrenia" — received the Dissertation Award in Nursing Science. “My dissertation looked at how individuals impacted by schizophrenia think, feel and act before they are diagnosed,” she said. “It laid the foundation for my subsequent research here at UW Tacoma.

The budding scholar came to campus a few months after completing her doctorate. It’s been a busy five years. Cheng teaches undergraduate and graduate nursing courses at UW Tacoma. When she’s not in the classroom, Cheng is writing papers or conducting research. “My research focus is mental health but within that I have different projects I’m working on including screening and intervention before health effects occur and managing disease post-diagnosis,” she said.

Cheng recently received at Tier 1 pilot research grant from the UW Population Health Initiative to develop and test behavioral health promotion approaches in schools. As part of this project, Cheng and a group of community partners developed a coalition with Tacoma Public Schools and MultiCare to better understand the needs of students. “Continuing with the tree metaphor, we are looking at ways to nurture kids mental health when it is in the seedling and sapling phases,” she said.

Cheng is also working with New Journeys. The organization provides services to individuals in the early stages of psychosis. “We piloted a program that brought in a nurse care manager to help coordinate care for those patients,” she said. “We found that having a nurse as part of a larger interdisciplinary team is feasible and can support those experiencing first episode psychosis.”

The other big project Cheng is part of is Psychosis iREACH. Cheng is working with interdisciplinary teams on a digital platform that uses artificial intelligence technology to deliver evidence-based family intervention to families navigating psychosis.

This is an important moment for Cheng and others doing research in the area of mental health. A recent report from Mental Health America (MHA) shows the mental health situation in the United States is deteriorating. Anxiety and depression are up as is suicidal ideation. In October of 2021, the American Academy of Pediatrics declared a national emergency in children’s mental health.

This trend isn’t lost on Cheng. It influences her research and informs her teaching. “Like I said, mental health is like a tree and the teacher is kind of an arborist,” she said. “I try to cultivate my students, not only their knowledge, but also their mental health and overall well-being.”