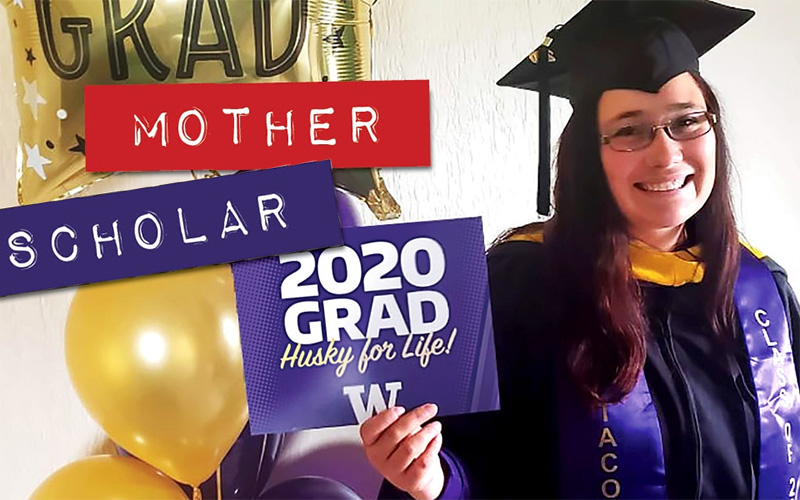 June 2022 update since this story was originally published:

Sarah Sutton (Wilkinson), '20, starts work on her Ph.D. in psychology at Northwest University this fall. First, Sutton, along with her husband Josh and niece Talilia Gadbaw will walk across the Commencement stage.

Sutton completed a Master of Social Work at UW Tacoma in the spring of 2020. Her husband earned a bachelor’s degree in criminal justice from UW Tacoma in 2021. “Neither of us got to walk,” said Sarah Sutton. “He [Josh] didn’t get to walk for his associate’s degree either. So, we thought participating in this year’s ceremonies would be a neat way to reconnect with people we met during our educational journeys – plus our niece is graduating so it’s kind of a family affair.

Sutton currently works at the Public Defender Association in Seattle as a case manager for the organization’s Co-LEAD (Law Enforcement Assisted Diversion) program. “I work with the unhoused or housing insecure population in Seattle and try to get them permanent housing,” she said.

The stories we tell, about each other and about ourselves, carry weight. Taken a step further, the words we use when telling those stories impact how they are heard and can lead to negative consequences. Referring to someone as formerly incarcerated isn’t the same as labeling them a felon. The former connotes the past and indicates a person has moved on or is capable of something different. The latter is a permanent state that follows an individual around and implies their past is their future.  “Labels can be a huge barrier and help perpetuate this internal stigma that formerly incarcerated individuals suffer with,” said Sarah Wilkinson.

Wilkinson is formerly incarcerated and once thought of herself as less. That started to change about five years ago when she enrolled at UW Tacoma to pursue a bachelor’s degree in psychology. “I was so full of shame that I didn’t share anything about myself because I didn’t think I’d be accepted,” said Wilkinson.

Wilkinson began rewriting the narrative about herself as an undergraduate, but really found her voice in the Master of Social Work [MSW] program. “I started disclosing after I got into the program,” she said. “I talked with people and everybody always greeted me with a positive response.”

Born in the Philippines, Wilkinson moved to Washington at age four. She grew up in Kitsap County and still lives there today. “I had a very functional-on-the-outside dysfunctional family,” said Wilkinson. “There was just a lot of bad experiences as a child, a lot of trauma, and as I grew up I really didn’t know how to cope with it.”

Wilkinson struggled in her adolescent and teenage years. “I had bouts of drug and alcohol use,” she said. Wilkinson fell behind at school and ultimately decided to leave and get her GED at age 16. “I’m really grateful that I have other family support that encouraged me to go right into college, and that’s what I did, and I excelled,” she said.

Wilkinson enrolled at Olympic College at age 17 and finished her associate’s degree two years later. During that time she met someone and decided to get married. “I thought it was better for me to focus on getting married than to continue my education and be a successful, self-sufficient, independent woman.” The relationship proved abusive which exacerbated Wilkinson’s underlying trauma and mental health issues. “I just kind of went downhill extremely fast,” she said.

The turning point came when Wilkinson was arrested and incarcerated for six months. Wilkinson is a mother and says the experience devastated her family. “I missed a child’s birthday, I missed Christmas, I missed Thanksgiving, I missed all of these things that were huge for my kids,” she said.

Wilkinson committed herself to changing the trajectory of her life. She started by getting clean and sober. Wilkinson made progress. Still, though her jail sentence ended, her punishment didn’t. “I couldn’t find a job because I had a criminal record and I just got denial after denial,” she said. Wilkinson heard “no” in other parts of her life. “This past March was the first time I was actually able to get a house on my own,” she said. “Nobody would rent to me.”

UW Tacoma turned out to be different. “I haven’t heard a ‘no’ from them yet,” said Wilkinson. As an undergraduate Wilkinson got involved with the psychology club on campus. She also helped Assistant Professor Rachel Hershberg with her research. “We got to go to different conferences and actually published a paper,” said Wilkinson.

As a graduate student, Wilkinson got involved with Assistant Professor Christopher Beasley’s Post-Prison Pathways. The program seeks to address the needs and priorities of formerly incarcerated students at UW Tacoma. She also helped co-found the Formerly Incarcerated Student Association and was the treasurer for NAMI (National Alliance on Mental Illness) on campus.

The MSW program includes a practicum component. For hers, Wilkinson worked with UW Tacoma’s Office of Student Advocacy and Support. “I was a case manager and I loved it,” she said. “I love working with students and that experience really got me interested in higher education and wanting to make a difference there, because I know how much it changed my trajectory.”

Because of the COVID-19 pandemic, the Commencement stage was virtual this year, but Wilkinson’s achievement is real. “I feel very accomplished,” she said. “Nobody else in my family has ever received a master’s degree. I think I have distant cousins who maybe completed a bachelor’s.” Wilkinson’s success has rubbed off on her kids. “My kids are talking about their plans for college,” she said. “My oldest is 14 and she wants to be a doctor.”

Wilkinson plans to spend the next few years working in the field of social work. She’d eventually like to return to school to pursue a doctorate. “The goal would be to teach in a social work program,” she said.

Sarah Wilkinson is formerly incarcerated. Presently, she’s a mother, an advocate, a college graduate and the first in her family to earn a master’s degree.