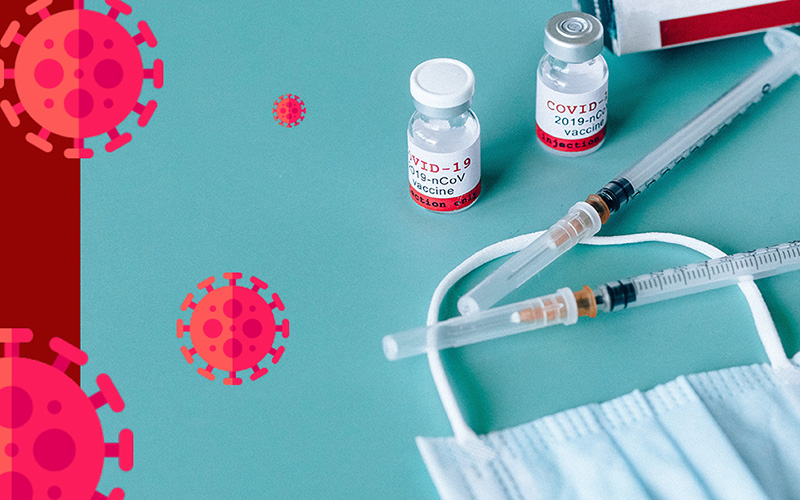 Seeing the Way Ahead

Healthcare professionals and students are helping spread the word that COVID-19 vaccines are safe and effective.

It will be nice to sit across the table from someone — whether they be a friend, family member or coworker — and have a conversation without having to tell the other person that “they’re muted.” To be in shared spaces together and not have to wonder if the physical distance between us is six feet or closer to five-feet-eleven-inches.

To see the bottom half of another person’s face in a public setting, an everyday occurrence that all but disappeared these past 15 months and had the effect of turning familiar faces into masked strangers, will be like the airport before 2001 when you waited with rising anticipation at the gate for a loved one to deboard and make their way down the jetway.

It’s going to be beautiful.

We’re not there yet. Governor Inslee has said the state will reopen on or before June 30. The exact date is tied to when 70% or more of Washingtonians over the age of 16 initiate vaccination.  As of this writing close to 60% of people 16 and older have received at least one dose. Here in Pierce County, the number of residents who’ve received at least one dose currently stands at 41%.

The Governor moved all counties in Washington to Phase 3 on May 18. This move brings much needed relief to businesses as they can now have more people in their establishments. It’s also good for our mental health to be able to venture out again. Still, while we don’t want to ride the brake any longer, neither do we want to hit the accelerator.

The sobering truth is that a number of scientists believe COVID-19 will be with us for a while, although there isn’t consensus about what that will look like. Also, while we’ve learned a lot about COVID-19 over the past several months, there’s still a lot we don’t know including how well current vaccines prevent asymptomatic people from spreading the disease as well as how long the vaccines protect those who’ve been vaccinated.

This isn’t rain on our much-needed and long overdue parade. Rather, as we’ve seen throughout this ordeal, information is the umbrella that offers us some measure of protection from the tempest. Knowledge blunts the wind, keeps the rain out of our eyes and allows us to see the way ahead.

The storm is passing. The skies are clearing and it’s going to be beautiful.

First things first. Demand in the United States for the COVID-19 vaccine has dropped in recent weeks. This could be because the people who really wanted a vaccine got one and the surge in demand that we saw early on, which outstripped supply, has relaxed into a slow-but-steady cadence. Some people might have been waiting for that initial rush to pass or maybe couldn’t find an appointment in their area because they were all booked. Some may have opted not to get vaccinated while others are reluctant and haven’t quite decided either way.

Kathleen Shannon-Dorcy is an Associate Teaching Professor at UW Tacoma. She’s also the Director of Research, Education and Clinical Practice at the Seattle Cancer Care Alliance (SCCA) as well as a staff scientist at the Fred Hutchinson Cancer Research Center. Shannon-Dorcy recently came on the UW Tacoma podcast, Paw’d Defiance, to talk about vaccine hesitancy.

There are a host of reasons why some are on the fence about getting vaccinated. The chatter on social media covers a lot of ground but one of the main concerns seems to be safety and the long-term impacts of getting the shots. “The important thing to note is this doesn’t change our DNA,” said Shannon-Dorcy. “What it does change is our T-cells' ability, our immune system’s ability, to resist disease.”

Resist is a word to remember. Getting vaccinated doesn’t necessarily mean you won’t still get COVID-19, but it could lessen the disease’s impact. “When we make a vaccine, it’s rather like a very complicated Lego set where the exact form of the virus is replicated and then we create another Lego piece to go over the top of it, to cap it off and keep it from continuing to grow,” said Shannon-Dorcy. “So, the vaccine is a Lego piece that attaches to another piece and works against the disease to keep it from becoming very dangerous or even deadly.”

It can take years to develop and test a vaccine. The speed in which the COVID-19 vaccines became publicly available has been a point of contention. Skepticism has emerged around whether or not the vaccines are safe in the long-term. Shannon-Dorcy notes that speed in this case is really the result of advances in technology and our understanding of disease that has played out over a period of decades. “When people think that it was fast, it’s because we’ve never had such collaboration across companies, across government agencies to bring something forward this quickly,” she said.

The U.S. Food and Drug Administration helped expedite the process by granting an Emergency Use Authorization (EUA). An EUA allows for use of unapproved medical products (including vaccines) in an emergency situation. “Most research in our country goes through early phase, phase one, phase two, phase three and occasionally phase four testing,” said Shannon Dorcy. “Phase three is head-to-head clinical trials which can take up to 10 years.”

Central to this thinking is a trade-off. In the United States we’ve lost nearly 600,000 people to COVID-19. Globally, the number is close to four million. “This disease may not always have a high death rate, yet it has a much higher death rate than almost any virus we’ve seen in the past 100 years, and it isn’t just the elderly, frail or the immune-compromised who are affected,” said Shannon-Dorcy. “The FDA looked at the toxicities and the safety across all trials and decided making the vaccines available was the better option than potentially waiting several years for approval.”

Medicine, both in the United States and globally, has a sordid history. Indeed, what we think of as medicine probably wouldn’t be recognizable to those living a few hundred years ago. Bloodletting and eugenics were once considered cutting-edge but are now widely panned.

The formation and evolution of the scientific method began a process of organizing and standardizing science. Even so, medicine continued to treat members of the BIPOC community as something less than human. “It starts from the early beginnings of chattel slavery through reconstruction, the Black codes, Jim Crow, to today,” said UW School of Medicine Assistant Dean for Social & Health Justice Edwin Lindo. Lindo talked about medical racism during a January 2021 episode of Paw’d Defiance.

“It takes different forms,” said Lindo, “but in the early parts of this, it was suggesting that Black folks, folks who weren’t white Europeans, were physiologically and intellectually inferior.”

This history is nuanced but it doesn’t feel like an oversimplification to say that these ideas both influenced the creation of new policy and reinforced existing policy. BIPOC communities were often denied access to quality healthcare or education based off racist ideas that were, in some part, informed by the science of the day. This denial is still being felt in different ways including when it comes to social determinants of health (SDOH). The World Health Organization defines the SDOH as, “the non-medical factors that influence health outcomes. They are the conditions in which people are born, grow, work, live, and age, and the wider set of forces and systems shaping the conditions of daily life.”

UW Tacoma Assistant Professor Sharon Laing studies the Social Determinants of Health. She spoke about this issue in an August 2020 episode of Paw’d Defiance.

“Life expectancy and other health outcomes are affected by a broad array of social and economic risk factors,” said Laing. “These social and other risk factors do shape the course of Blacks and other economically disadvantaged communities and these factors do lead to premature disease and death.”

Hesitation within BIPOC communities makes sense when one looks at the larger historical perspective. The challenge for those in healthcare is to find a way to build trust. “At times we think that people of color, people of different ethnic and racial populations should come to us in healthcare, the place on the hill,” said Shannon-Dorcy. “Us leaving the ivory tower is an important part of this.”

There are no ivory towers at UW Tacoma, just a lot of old brick warehouses. The architecture speaks to our character, a philosophy rooted in being part of a community, not apart from the community. During the pandemic, a number of faculty pivoted to address the needs of the moment. Shannon-Dorcy’s dual roles at UW Tacoma and the Seattle Cancer Care Alliance overlapped. During the winter and spring quarters students in the master of nursing program who needed clinical rotation hours and internships worked in a regular vaccine clinic held at the SCCA. “We teamed them [MSN students] with undergraduate students from Seattle Pacific University and had them teach how to administer a vaccine,” said Shannon-Dorcy.

Associate Professor Robin Evans-Agnew tasked students in his Healthcare Leadership class with helping Pierce County residents to get vaccinated. A group of students got together to form the Husky Vaccine Task Force.

Task Force members are working to get volunteers to staff vaccine clinics. They are also reaching out to members of the BIPOC community and to others who are reluctant to get vaccinated. “We’re really just trying to answer any questions that someone may be struggling with,” said UW Tacoma Healthcare Leadership student Emily Lopez.

The group has put out information about the vaccine both in English and Spanish. Cost is one of the concerns they’re hearing from people. According to the Centers for Disease Control and Prevention (CDC), the vaccine is offered “free of charge to all people living in the United States, regardless of their immigration or health insurance status.” It should also be noted that the Department of Homeland Security issued a statement in which it states, “U.S. Immigration and Customs Enforcement and U.S. Customs and Border Protection will not conduct enforcement operations at or near vaccine distribution sites or clinics.”

Task Force members also report that people aren’t sure where to go to get vaccinated. There are a number of clinics in the area including at UW Tacoma.

We’re used to clouds in this part of the world. When it comes to the pandemic, it’s still partly cloudy. Those connections we’ve all being aching for will happen. Even then, the forecast won’t be exactly what we want. There is likely to be some level of cloud cover in the weeks and months ahead. The speed of our recovery will depend. Perhaps what matters most at this moment is not just getting vaccinated, but also the manner in which we reach out to others who are hesitant. “I think we can’t let people be dismissed for how they think,” said Shannon-Dorcy. “When it becomes a political statement or a statement of affiliation, we’re not at the heart of what the vaccine is about because the vaccine is meant to promote health and to equitably protect a world that could suffer from the consequences of not being protected against coronavirus.”