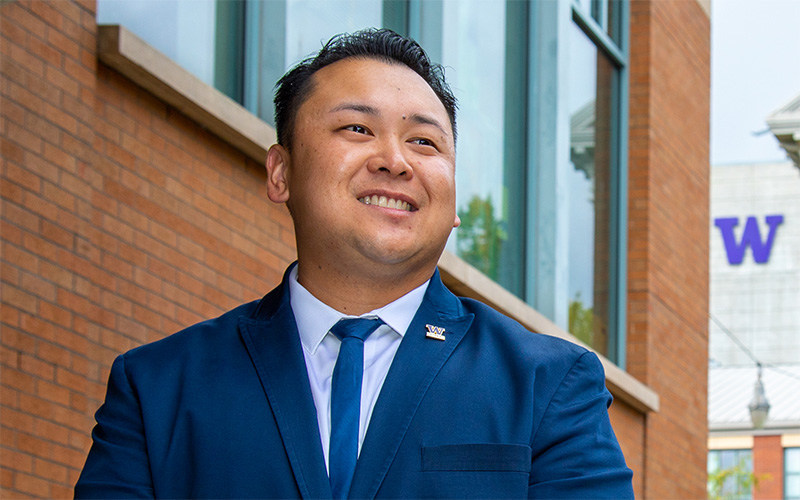 Update since we originally published this story in Sept. 2019: Jeff Bantay welcomed his third child into the world, in Jan. 2020. He served as SVOUWT Secretary and President. Since the pandemic started, Bantay assumed the responsibility of helping his older children as they navigated remote schooling. He currently works in UW Tacoma's Office of the Registrar.

Jeff Bantay quickly dons his U. S. Army Physical Fitness Uniform. He laces up his shoes, grabs the car keys then heads for the door. Bantay normally gets up at 5 a.m. but on this particular day he’s overslept. “I’m thinking I’m going to be late for PT (physical training),” says Bantay. He walks to the front door, is about to turn the handle when he remembers. “I’m not Staff Sergeant Bantay anymore,” he recalls thinking. “I’m Jeff.”

Bantay served in the army from 2000 to 2015. He was medically retired from the Army due to injuries sustained during multiple deployments to Iraq and Afghanistan.  “During one of my deployments I was a gunner on a Humvee and we hit an IED (improvised explosive device),” said Bantay. “The vehicle rolled over and I was ejected from the gunner’s hatch.”

A third-generation service member, Bantay planned to follow in his father’s footsteps and spend 20 years in the army. Bantay’s grandfather was a Filipino scout for the U.S. Army during World War II and survived the Bataan Death March. An estimated 5,000 to 18,000 Filipino prisoners of war died during the forced march.

Jeff Bantay could have gone to college following graduation from Tacoma’s Lincoln High School. He’d been accepted into Pacific Lutheran University where he planned to pursue a degree in civil engineering. “I didn’t get the funding package I wanted,” he said. Bantay considered enrolling at Washington State University but decided instead for a career in the military. “I thought I’d complete my four year obligation and try the college route again but I loved being a soldier,” he said.

Bantay built a life for himself during those 15 years in army. He got married, had kids and developed close friendships with other soldiers. Bantay would have stayed in the military if he could. “It got to the point where I couldn’t even walk on my own,” he said. “The doctor gave me an option, he said ‘do you want to enjoy playing with your children or do you want to use a cane or walker for the rest of your life?’”

The transition to civilian life proved difficult. “I fell in that dark hole after getting out,” said Bantay. “I was so used to knowing what I was going to do every day, now I had all this free time and I was lost.” That first year out of the army Bantay struggled with anxiety and depression. He considered enrolling at Tacoma Community College (TCC) but didn’t. “I sat in the TCC parking lot once for 30 minutes contemplating if I was going to go into enrollment services or not,” said Bantay.

He didn’t get out of the car that time but Bantay would try again. "I’m thankful for the support I got from my wife and my family,” said Bantay. “I also reached out and got help in other places.” Bantay signed up for classes at TCC in 2016. There he met fellow veteran Thomas Di Giorgio. “I was that type of guy that just went to class and then went home,” said Bantay. “He [Di Giorgio] was very active on campus and he got me involved.”

Di Giorgio founded and served as president of TCC’s student veteran association. Bantay was appointed treasurer. The two duplicated those roles when they both transferred to UW Tacoma in the fall of 2018. This year Bantay will serve as president of Student Veterans Organization at UW Tacoma (SVOUWT), which is a nationally recognized organization and a Student Veterans of America Chapter. He is also one of the team leaders for Peer Advisors for Veterans Education (PAVE).

The next nine months will be busy for Bantay. In January he’ll welcome a third child (a boy) to the family and in June he’ll graduate with a degree in ethnic, gender and labor studies. “In the army you get exposed to different cultures and ethnic groups and I wanted something that would allow me to continue exploring these areas,” said Bantay.

Bantay still gets up at five in the morning but instead of putting on a uniform, he helps get his kids ready for school. They grab their backpacks and so does he. Bantay’s wife goes to work, he and the kids go to class. “I’ve really enjoyed my experience here at UW Tacoma,” he said. “The staff at the Veteran & Military Resource Center have been very helpful and welcoming. My involvement with SVOUWT has given me a sense of belonging again just as I did in the Army.”