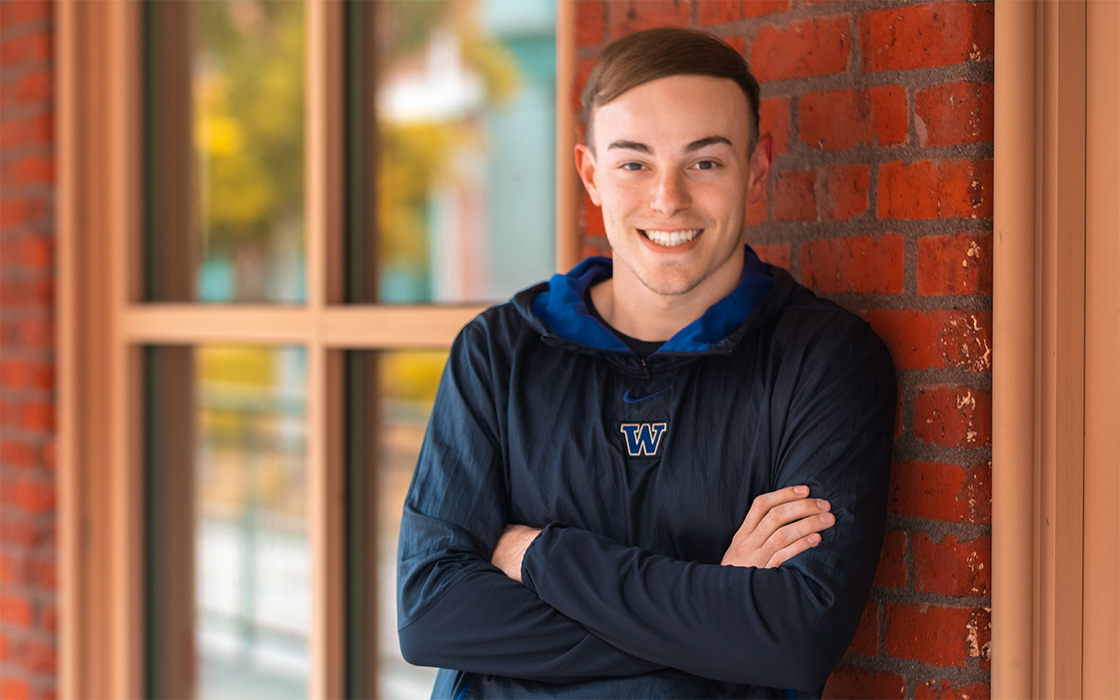 Spencer Tyson: The Nature of Change

With pandemic chaos all around him, Spencer Tyson leveraged his college experience to drive change in public health systems.

Spencer Tyson started thinking about the nature of change while he was still admittedly “slacking off” in high school. Because he took advantage of the Running Start program during his junior year at Auburn Riverside, he never really got into high school campus life, and started classes at Green River Community College.

Originally intent on the goal of becoming a neuro-surgeon, Tyson’s ambitions changed when he saw the path ahead of him. “I realized that I didn’t want to stick with 12 years of schooling. I wanted to get my life started,” he said.

Tyson still wanted to work in the health-care profession, though he knew that medical school wasn’t going to work. He was seeking change, first in himself, and then in his education – and he found it at UW Tacoma.

“My first quarter here is where it all started,” Tyson said. Majoring in healthcare leadership, Tyson took advantage of opportunities to do the opposite of what he did in high school, and become actively involved in campus and community life on the suggestion of one of his “favorite professors.” Assistant Teaching Professor Alex Miller was teaching an introduction to literature course, “but he also plugged a lot of different activities on campus and offered extra credit if we went and did them,” Tyson said. “That’s how I started getting my foot out there.”

“My professors saw that I wanted to help in any way possible,” Tyson said. When COVID-19 vaccines became available, he got involved in analyzing local data to learn more about community acceptance of it. He was working with Associate Professor Robin Evans-Agnew, doing extra-curricular work. “We used the Pierce County Health Department’s data to pinpoint the lack of vaccination rates in the Tacoma and Pierce County Community.”

The work with Evans-Agnew was the beginning of the Husky Task Force, which Tyson, then a junior, helped create. The group worked through the healthcare leadership major to provide community outreach through the pandemic.

Because of COVID-19 restrictions, seniors in the program couldn’t get placement in internships and so the task force recruited them to help process information, and to act on the information they found by engaging with the community. They analyzed the health department’s data and saw that the low vaccination rates were primarily in the Latinx community within Pierce County.

“We were wondering why and assumed it was a lack of vaccination sites,” said Tyson. “So, we did pop-up sites and had nursing students volunteer to go give shots at the sites.” But after several weeks, the data still revealed low vaccination rates and something had to change. “We realized that we needed to step back – and we saw that it wasn’t just a lack of access, it was a lack of trust in the public health system,” said Tyson.

Another professor whom Tyson credits with teaching him the importance of systems change is Teaching Professor Lauren Montgomery. “During her courses, she was teaching me that everyone is their own individual person, they have their own beliefs based on their own experiences and you have to meet them where they’re at,” he said.

This realization led Tyson to the understanding that systems change is necessary in the healthcare industry – that it must start with the people in each of their roles and work its way to the top from the bottom, not the other way around.

This insight helped Tyson and the Husky Vaccine Task Force rethink their strategy when it came to vaccine hesitancy in the local Latinx communities. “We changed our whole approach,” Tyson said. “Instead of just voicing ‘Hey, this is what we’re doing, come get your vaccine,' it was, ‘What can we do to better support you? Why are you not trusting this process?’”

It was a telling example of what Tyson sees as the real need in the American healthcare system – a change that includes supporting people’s choices, engaging the community and understanding where each one is coming from.

With that understanding, the task force began to recruit workers within Latinx communities, created fliers in Spanish that explained the vaccination process and focused on how they could provide the services needed. “People’s autonomy was being disrespected,” he said of the previous public health approach to vaccinations.

At the same time he was working with the Husky Task Force, Tyson was introduced to and joined a registered student organization called Partners in Action to Transform Healthcare, or PATH.

“I was apprehensive at first because as I came to my senior year, it was going to be a lot on my plate, applying for different jobs, taking classes, but I wanted to be involved and I wanted to get out there and build more experiences for my resume,” he said. The organization put together blood drives, blanket drives, hygiene drives and other public health approaches to reach out to the community that needs them.

He became vice-president of PATH, and though COVID hampered some of their efforts (handing out blankets was not permitted for a time) they were still able to work with underserved communities to provide needed services and items that they could manage.

Through PATH, Tyson was also able to go to Chicago for the American College of Healthcare Executives Convention. Some 4,000 attendees from across the country gathered for seminars about how to improve healthcare. “I attended a seminar on how to prevent burnout in an online workforce, which is a growing problem,” said Tyson.

Currently, Tyson is busy establishing a legacy and “passing the torch” to students who will take over PATH and the Husky Task Force. He’s also working as a medical data specialist at All4Cure, a company founded by Dr. Tony Blau, a professor of medicine and hematology at UW in Seattle. All4Cure focuses on multiple-myeloma cancers primarily by aggregating data from individual patients across the nation. It’s a job he loves, and a springboard for what may come next.

But if it does, it comes with what Tyson says drives him – the need for systems change. “It has to start from the ground, with the individual – and work its way up. That’s the only way to make real change, systems change,” he said.

As for Tyson, he’s ready to face the challenge – he’s been there before.