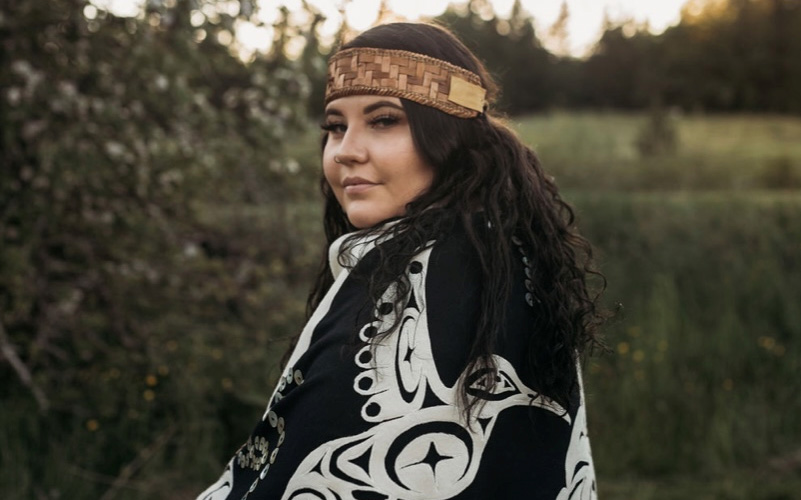 Taylor Owens wants to use her criminal justice degree to address the ongoing tragedy of missing and murdered Indigenous women.

Taylor Owens is soft-spoken, but not necessarily quiet. At first glance she might seem timid, maybe even a little shy. Owens’ style is part caution, part deliberation. In a world of influencers, it can be hard to spot and truly appreciate those among us who achieve without fanfare, who seem to surprise us when we learn of their success because we’ve grown accustomed to celebrating only those who seek our attention.

Owens grew up in Shelton, Wash. She is a member of the Squaxin Island Tribe, whose ancestral homelands are situated in what is now southeast Mason County. Community is an important part of Owens’ life. She is actively involved with her tribe and has been for several years.

Until recently, Owens worked as a Tobacco Cessation Specialist for the tribal clinic. “I was able to host community events and do a lot of outreach to young people in our community,” she said. Owens currently works as regulatory agent at the Squaxin-owned and operated Little Creek Casino Resort.

Higher education is important to Owens. She earned an associate’s degree from Olympic College before starting at UW Tacoma in the fall of 2019. Owens’ decision to attend college was partially for herself, and partially because she wanted to set an example. “I wanted to be a role model for other young people in my tribe which is one of the reasons why I want to keep going,” she said. Her efforts extended to creating a combination education and job fair for members of the Squaxin Tribe. “The goal was to get students thinking about what they wanted to do after high school,” said Owens.

Owens took online classes during her last two quarters at Olympic College. The Criminal Justice program at UW Tacoma offers an online option which appealed to her (the program existed before the pandemic forced universities around the country to switch to remote instruction). “Online learning allowed me to work at my own pace,” said Owns. “It also made it possible for me to work while going to school.”

Owens has thrived while at UW Tacoma. Near the end of her junior year she was named a Udall Scholar. The scholarship recognizes “college sophomores and juniors for leadership, public service, and commitment to issues related to Native American nations or to the environment.” The scholarship is highly competitive and only 55 students were chosen nationally to receive the honor in 2020.

That same year found Owens interning as a legal assistant with the U.S. Department of Justice. Owens initially planned on pursuing social work but ultimately changed her mind. “I panicked right before signing up for school,” she said. “I had an interest in social work and in law and I just thought criminal justice was a better fit for me.”

A first-generation student, Owens plans to participate in more than one graduation ceremony. She’ll take part in UW Tacoma’s commencement and in celebrations hosted by her tribe. “We have an education ceremony every year called Sqwi-gwi where we put on our button blankets and our cedar hats and walk across the stage,” she said. “I think it’s different this year because of COVID but I love going to this every year to see everyone, from kids to Ph.Ds., be recognized.”

Owens plans to pursue a juris doctorate and specialize in Indigenous law. “Long-term I think I want to work at the DOJ,” she said. “I’d like to find a way to work where the Department of Justice and tribes intersect, specifically on the issue of missing and murdered Indigenous women.”