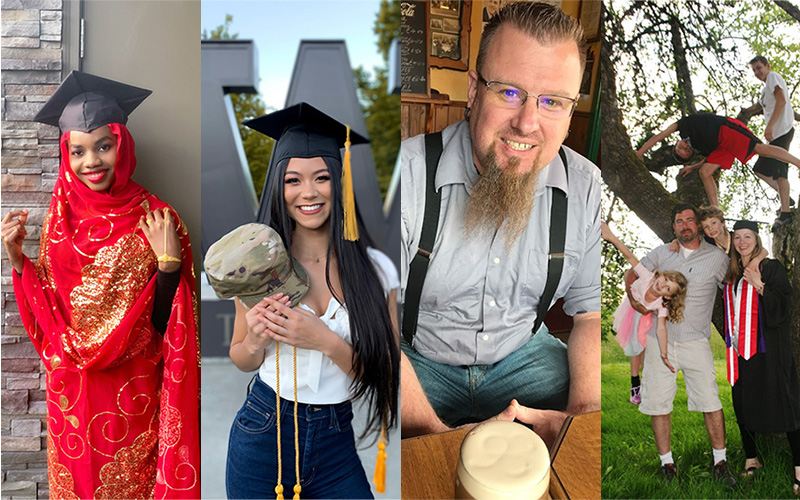 Thnwa Ahmed, ’20, has already accomplished a lot in her 25 years. She considers herself a relatively shy and quiet person, but that hasn’t stopped her from advocating for herself. She’s going places. Ahmed has already achieved some pretty incredible goals including living in four countries, learning multiple languages, and completing professional certifications, internship programs and two university degrees in just five years. Through planning and passion, Ahmed is proving that hard work really does pay off.

The youngest girl of eight children, Ahmed was born and raised in Abu Dhabi, the capital city of United Arab Emirates. Originally from Western Sudan, her family was forced to make the difficult decision to leave that African country in the wake of violence. Ahmed’s family moved to Malaysia for a short time before moving again to the United States, and while in Malaysia, she reconnected with a great uncle who had obtained his Ph.D. in cybersecurity. The two talked about cybersecurity, social engineering attacks and cybercrimes. Discussing her uncle’s work sparked something in Ahmed. “I thought this is something I can help the world with,” she said.

In 2016, Ahmed was about to start an information technology (IT) degree program when her father was suddenly diagnosed with cancer. Ahmed put her plans on hold and moved with her family to the United States to facilitate her father’s treatment. Connections to friends brought Ahmed’s family to the Pacific Northwest, where she came across the cybersecurity degree program at Columbia Basin College in Eastern Washington. The program seemed like a perfect fit for the career Ahmed wished to pursue. After graduating from Columbia Basin College in 2019 with a Bachelor of Applied Science degree in cybersecurity, Ahmed immediately started on a Master of Cybersecurity and Leadership degree (MCL) at UW Tacoma.

Ahmed says the program helped her stretch beyond a technical understanding of cybersecurity, analytics and reporting. “When I went to the master's program, I learned that it's not only about being technical, it's about your leadership skills and your communication,” she said. Ahmed says she learned a lot from her fellow students and credits working in teams with helping her develop communication skills as she collaborated with classmates on group projects and presentations. Ahmed also participated in a year-long internship program that included six months training to be a database analyst, then a six-month internship at Expedia, where she gained valuable real-world experience in order to hit the ground running after college.

Ahmed completed the MCL in June and accepted an IT engineering position with the Tacoma-Pierce County Health Department. She also worked as a data consultant with the Washington State Department of Social and Health Services. She is contemplating pursuing a Ph.D. as a possible next step, but after five years in school without stopping, Ahmed is finally taking a break.

Though Ahmed’s current day job may sound relatively straightforward, she has a particular interest in an area of cybersecurity called “penetration testing.” What exactly is penetration testing? “You test an organization’s security by hacking into it, finding where the vulnerabilities are, and suggesting some mitigation controls that will help strenghen the organization’s security,” Ahmed explains. She currently holds the “certified ethical hacker” designation from the International Council of E-Commerce Consultants (E-Council), and hopes to pursue penetration testing as an area of expertise. Not to worry, says Ahmed. “We are the good people.”

Ahmed’s parents are especially proud of their daughter. Her parents encouraged Ahmed and her seven siblings to focus on school and make the most of their educational experiences knowing it would open doors for them in the long run. “In my culture, in Sudan,” says Ahmed, “the goal is get married at a young age.” But Ahmed’s family has always valued education as a first step in life. “They said persistence and hard work can get you anywhere,” explains Ahmed. Her mother, who has been a lifelong inspiration to Ahmed and her siblings, is now about to finish an associate’s degree herself.

“My mother really wanted to finish her education since she was young, but she couldn't,” said Thnwa. “But now, there's nothing that she needs to worry about. She's like, ‘maybe now I can go back and do something.’"

Looking back, Thnwa Ahmed is proud of how far she has come. “Coming from a totally different country and background, and for me to get here and learn about different things about the United States, the culture, and get into school and do all of that — it wasn't easy,” she said. In the end, Ahmed believes that the many difficult challenges she faced in both a new culture and in pursuing a degree at an accelerated pace were worth it, and she is excited about her future. “The struggles, the sleepless nights, they are all going to go away and what's going to remain is the results,” she said.

And as her many accomplishments demonstrate, hard work pays off.