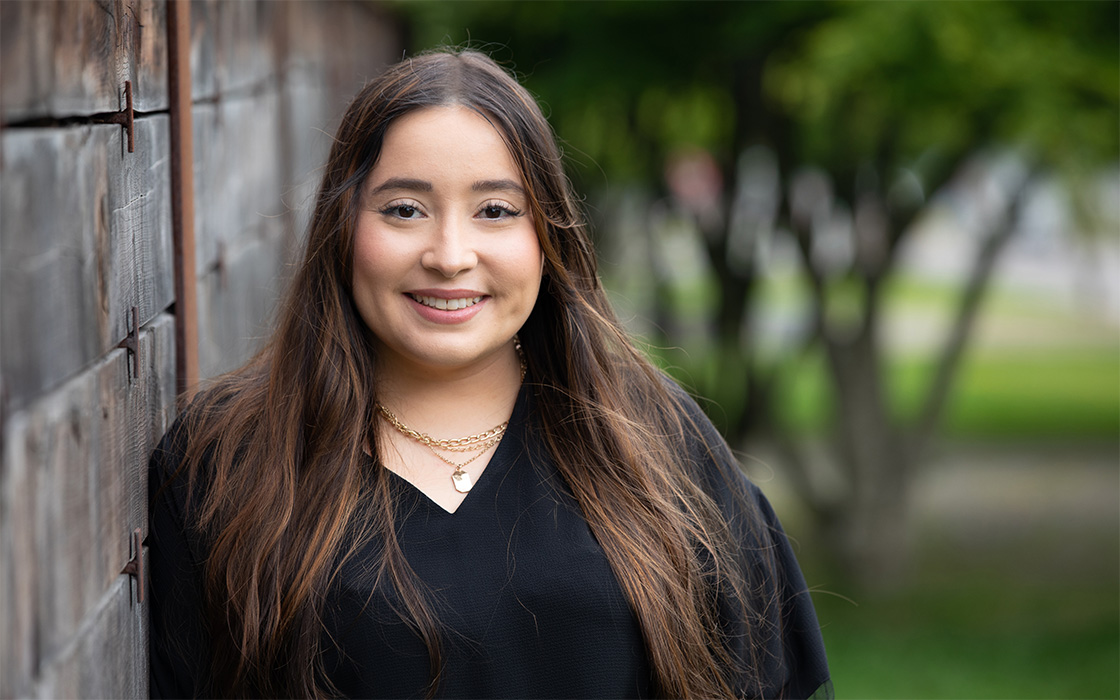 After life as a military brat and coping with COVID, Tilly Gadbaw is looking forward to using her management degree to help other people do their best.

Talilia “Tilly” Gadbaw, will walk the UW Tacoma Commencement stage at the Puyallup Fairgrounds this month, secure in the knowledge of at least one thing – her education mattered. Gadbaw nurtured her passion for education through a string of difficulties, including moving more than six times in one year with her family. “My stepdad was in the military,” said Gadbaw.

Before her stepdad came into the family, Gadbaw’s mother escaped an abusive relationship. “It was really amazing,” she said. “I grew up with a single mother of three kids and she provided the best for us she could.” Gadbaw, her mother and two young brothers moved to Wenatchee where they had family and a support system. “I do consider Wenatchee my home,” she said. “We stayed there the longest when I was younger.”

Gadbaw did well in school. “I was a straight A and B+ student in middle school and high school,” she said. “Once I started moving, that wasn’t obtainable for me. I just couldn’t do it. It was a lot of movement.” Gadbaw’s grades slipped.

She eventually left school and earned a GED. “I didn’t quit until I had to,” she said. “It was a really hard choice.” Gadbaw said that not getting the credit for all the hard work she’d done in high school was difficult, but she kept her focus on the future. “I knew I wanted to go to college,” she said. “That desire never left.”

By then, the family was in Washington D.C. and the east coast appealed to Gadbaw. She enjoyed the rich culture and the history – and she got her first job there at a Starbucks, a company for whom she continues to work.

“My parents were going to be moving again with the military to Virginia,” she said. “I had just turned 18 and was starting to do the college stuff on my own.” Gadbaw said she didn’t want to keep uprooting, so she moved back to Wenatchee, where she still had an extended family support system. “I think it was a comfort for my mom,” she said. “She knew that there were people there that she could trust and who would take care of me. That’s kind of what drew me.”

Once settled, Gadbaw went to Wenatchee Valley College, where she originally majored in psychology and obtained an associate’s degree before transferring to UW Tacoma. “My parents had just moved to Tacoma,” she said. “I value being surrounded by family and they were like, ‘Come live with us for a little bit so you can get your bachelor’s.’” While Gadbaw pursued her bachelor’s degree, both her mother and stepdad completed their associate’s. “I was super proud,” she said. Gadbaw is the first in her family to obtain bachelor’s degree.

Living again with her family allowed Gadbaw to focus on her business management degree, while working part-time at the Starbucks on campus. “I really enjoy being around people, trying to be the best leader I can be,” she said. “I really like leadership and helping people do their best. That’s what kind of drew me to management.”

Like many students, Gadbaw struggled with moving to a remote model of instruction during the early stages of the pandemic. “COVID took a lot out of me, long-term and short term,” she said. Gadbaw didn’t enjoy being an online student and even considered dropping out of school. “It was a drastic change,” she said. “I struggled with it immensely. I even had to retake a class and that’s not me. That was super hard, defeating. I remember crying to my mom about it and saying, ‘I need to drop out. I’m done. I ruined it.’”

Gadbaw’s mother pushed back and told her to go ahead and drop out. “I told her, ‘You’re not supposed to say that,” said Tilly. “I’m supposed to continue. You’re supposed to tell me to go.’” Gadbaw’s mother then told her, ‘Then let’s do it — let’s go.’ “She knew I wasn't going to drop out and that’s why she could say it with such confidence.”

Once on-campus learning resumed, Gadbaw got involved with the Milgard Women’s Initiative as the high school leadership coordinator for the program development committee. She started out as a volunteer, but then moved into a paid position. “What I’m doing is a program called ‘Lead your way,’” she said. “It’s a high school leadership one-day event that will be held August 5 for high schoolers in Tacoma.” Gadbaw said she loves the program, which allows her to be creative as well as work with people, something she found she loves doing.

Gadbaw said UW Tacoma exceeded her expectations. “I made some great relationships, I have some great friends and friendships with people around here and I think that’s really awesome,” she said. “It’s not just a commuter school.”

For Gadbaw, the graduation ceremony itself represents what she says is a ‘great’ moment in her life, especially because her mother will be there to see her graduate. “She’s the reason I did everything,” Gadbaw said. “She’s literally the reason I’m here and I’m doing this and she just makes me so proud to be who I am.

“I don’t always give myself a chance to appreciate all the wins – the big wins and the small wins, I have achieved. And so being able to walk across that stage gives me that ability to really process the big win that I have by graduating from UWT.”