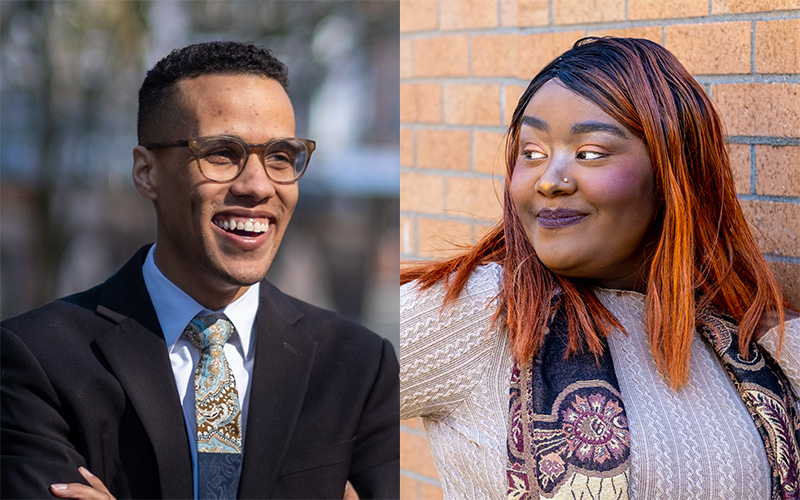 Chanise Jackson and Andre Jimenez plan to go to graduate school and dedicate their careers to public service.

Two UW Tacoma juniors and one junior from UW in Seattle have been selected for the prestigious Truman Scholarship, the first time since the program began in 1977 that three UW students were chosen in a single year. Andre Jimenez and Chanise Jackson attend UW Tacoma, and Naomi See attends the UW campus in Seattle.

A highly competitive award, only 62 students were selected nationwide this year for the Truman Scholarship from more than 845 nominations. The scholarship recognizes aspiring leaders driven to make change at the policy level. Students are selected on the basis of leadership skills, demonstrated civic engagement, academic potential and a desire to pursue a career in public service.

“Congratulations to all three of our outstanding Truman Scholars, whose leadership and dedication to advancing equity is so deserving of this extraordinary recognition,” said UW President Ana Mari Cauce. “Andre, Chanise and Naomi each embody the commitment to impact through public service and civic engagement that’s at the heart of our university’s mission. We are so proud to have these three scholars representing the UW.”

Scholars receive up to $30,000 for graduate school to help prepare them for careers in public service.

Jackson, a double major in law and policy and business administration, entered UW Tacoma as a first-year student. She is the Co-Chair (with Jimenez) of the UW Tacoma Global Honors Student Leadership Council and President of the Urban Debate Society. Originally from Fredericksburg, Virginia, Jackson developed a love for public service when growing up low-income and first-generation meant relying on the community around her for needs, instructions, and hope alike. She is passionate about writing poetry, Lupus awareness, public service, human rights and activism. In her future career, Jackson wants to use her activism, experiences, and love for people to bring volume to the voices often silenced.

Jimenez, who is from Tacoma and came to UW Tacoma from Tacoma Community College, is a junior studying law and policy and minoring in global engagement. He hopes to pursue a law degree upon graduation. He currently serves as Co-Chair (with Jackson) of the UW Tacoma Global Honors Student Leadership Council and is the School of Interdisciplinary Arts & Sciences (SIAS) senator. He also serves as a Commissioner on the City of Tacoma’s Human Rights Commission, which studies, investigates, and mediates community issues that may result from discrimination. Prior to pursuing his undergraduate education, Jimenez worked in the non-profit sector as a fundraiser and development associate.

“I am incredibly proud of Chanise and Andre, and of the faculty and staff that mentored them,” said UW Tacoma Chancellor Mark Pagano. “They are UW Tacoma’s first Truman Scholars, and there have been only 17 in total at UW since the scholarship was created. We can all be proud that the Truman Foundation recognizes and values Andre and Chanise’s community-engaged work.”

Established by Congress in 1975 as a memorial to President Harry S. Truman and national monument to public service, the Truman Scholarship carries the legacy of the 33rd President of the U.S. by supporting and inspiring the next generation of public service leaders.

When approached by a bipartisan group of admirers near the end of his life, Truman asked Congress to create a living memorial devoted to this purpose, rather than a traditional brick-and-mortar monument. For more than 40 years, the Truman Foundation has fulfilled its mission to inspire and support Americans from diverse backgrounds to public service.

This year’s 62 awardees join a community of 3,384 Truman Scholars named since the first awards in 1977.