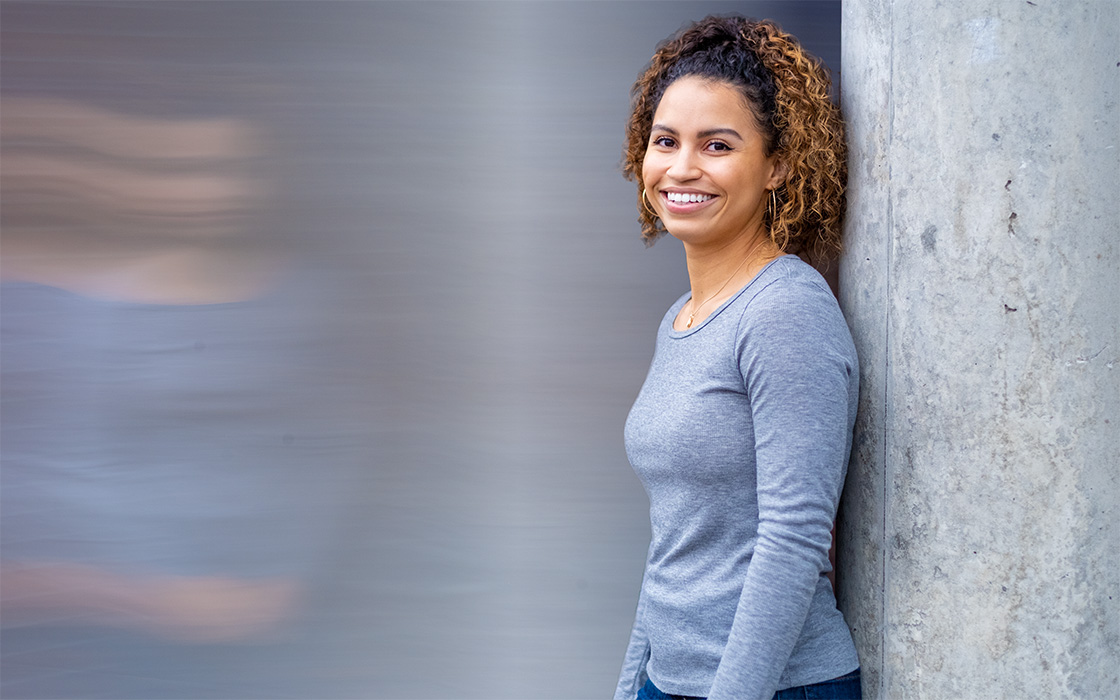 Inertia is always there, always resisting change. Overcoming inertia requires energy, either your own or someone else’s. For the latter, picture someone extending a hand after you’ve fallen. Inertia wants to keep you down even when all you want to do is get up. If no one’s around to help then you’ll have to rely on yourself. You will need to muster the strength to stand. You will have to put one foot in front of the other. Getting going can be slow at first. Keep going, keep pushing. Harness inertia.

Saranda Ross moved to Washington from Arizona at age 10. “My mom ran from our dad,” said Ross. “They were in an abusive relationship and so she packed me and my siblings up in the middle of the night.”

Ross’s family started over in Tacoma. The location changed but the family situation remained fraught. “I grew up really poor,” said Ross. “We didn’t have consistent access to food so we relied on food banks and food stamps or programs that provided free lunches.”

Ross didn’t attend high school. She dropped out and started working in order to help support the family financially. At 16 she earned her GED. A year later she packed a bag full of essentials — clothes, toothbrush, toothpaste — and left. “I left to escape my mom’s physical and mental abuse,” said Ross.

The then-teenager spent the next few years living in a state of survival. Ross worked and slept in her car or on friends’ couches. At age 19 Ross enrolled in the paralegal program at Tacoma Community College. She went this route for practical reasons. “The program was short and the work was stable,” said Ross.

Ross’s interest in becoming a paralegal led her to Tacomaprobono. The local organization provides free civil legal aid to low-income Pierce County residents. Ross volunteered with the nonprofit. She did client intake, took notes for Tacomaprobono’s volunteer attorneys and hosted legal clinics. “The clients that I worked with dealt with the same issues that my family dealt with when I was growing up,” said Ross. “It was nice to be able to help facilitate different outcomes.”

The experience at Tacomaprobono changed Ross’s career trajectory. She left the paralegal program and set her sights on becoming a lawyer. Ross completed her associate’s degree before transferring to UW Tacoma in the fall of 2013 to pursue a degree in communication.

There’s a Newtonian idea that a body in motion tends to stay in motion. The thinking goes that once an object picks up enough speed it will continue on its route at that velocity if nothing gets in its way. The object in this case is Ross. Her path: becoming a lawyer. Ross’s momentum carried her to and through UW Tacoma. “I took twenty credits each quarter and I also did summer classes so I could graduate early,” said Ross.

It’s not that Ross didn’t want to be at UW Tacoma. Rather, she was a body in motion, one could even say an unstoppable force and any object that was immovable (perceived or otherwise) needed to get out of the way. “I had some really great professors here including Elizabeth Bruch and Chris Demaske,” said Ross. “The classes I took also offered me the opportunity to improve my reading and writing skills, both of which helped me prepare for law school.”

Senior year in college is a busy time, especially for Ross. She worked, went to classes and did homework. In between, she studied for the LSATs and filled out applications to seven different law schools. “I got into all of them, including UW,” she said.

The UW School of Law is a highly-ranked and internationally respected institution. This reputation combined with the school’s location appealed to Ross, but something else influenced her decision to apply and ultimately attend UW. “When I first started thinking about law school one of my friends told me, ‘You’re a high school dropout, you’re not getting into UW,’ ” said Ross. “Part of me fixated on wanting to prove her wrong.”

The thing about motion: it can be destructive. The faster one goes the harder it can be to control where you’re going or what will happen if you encounter an obstacle. This isn’t true of Ross. She’s made of a different kind of energy. Achievement for Ross is a fuel, one that propels her to learn more with the ultimate goal of using her knowledge to build rather than destroy.

Ross thrived in law school. She earned two Foreign Language and Area Studies Fellowships through the U.S. Department of Education. The second fellowship allowed Ross the opportunity to spend the summer in Portugal studying and immersing herself in European Portuguese.

Ross honed her legal prowess both in and out of the classroom. While in law school she spent her summers working at a Tacoma-based law firm. Ross graduated with her Juris Doctorate in 2019. She then passed the bar exam before spending spent two years as a Judicial Law Clerk for the Washington State Court of Appeals.

In a pandemic-free world Ross would be in Brazil right now researching food insecurity as a Fulbright Scholar. “The program has been pushed back a year until March of 2022, and whether it proceeds depends on where we are with COVID,” she said.

Ross is no longer a law clerk. This past summer she took a position as a staff attorney for Tacomaprobono. Someone with Ross’s experience and skills could have worked for a major company or as a junior partner in a high-profile law firm. “I’m just so much more motivated to show up and bust my a** with what I’m doing now, and it just makes it more worthwhile and meaningful,” she said.

The past is a place Ross reflects on but doesn’t live in. The struggle that marked her young life drives her, but doesn’t define her. “I’m always looking forward, thinking about what’s next, what I can accomplish or what I can help improve or change,” she said.

Ross’s immediate future is Tacomaprobono and hopefully Brazil. After that, she has a plan. “I see myself in a policy position addressing changes in food laws,” she said. Ross is a passionate vegan who sees food, how it’s produced and who has access to it, as a moral issue. “The amount of food that our system provides to feed animals could basically feed the entire world,” she said. “The system we’ve created is harmful to us, to animals and to the planet.”

Inertia is movement (or lack thereof) but it can also be applied to the social systems that govern our lives. The policies and practices we’ve put in place are resistant to change. They carry their own weight. Change requires disruption, an exertion of energy from an external force. That force is Saranda Ross.