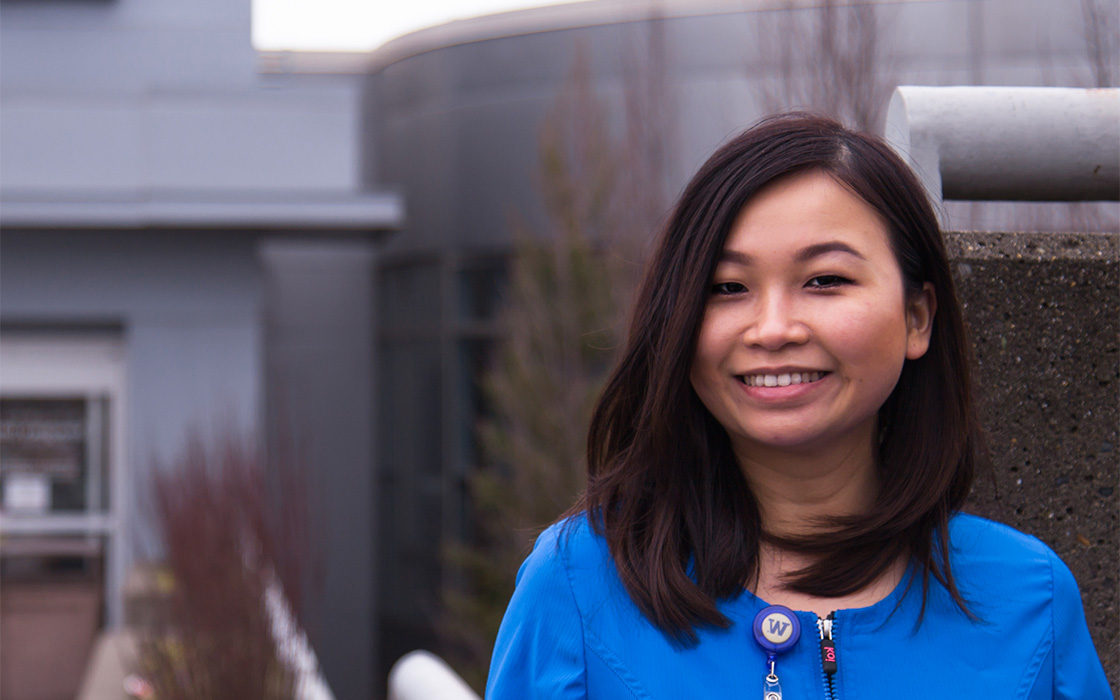 Van Huynh: The Kindness of a Smile

Van Huynh, '18 B.S. Nursing, had an experience with a surly nurse which became a turning point, setting her on the way to becoming a leader in health care.

Update to our original story: Following graduation Van will apply to the Doctor of Nursing Practice program at the University of Washington School of Nursing.

When she was hungry and scouring the streets of Vietnam for food, when her father would beat her and her mother in their tiny one-room home, as she helped clean the family’s roadside fruit stand every day, Van Huynh weathered it all with one shining goal in her sights: to get an education.

Thanks to a scholarship she’s received at UW Tacoma, that dream is finally within her grasp. But it’s been a very long and troubled journey.

Van’s father abandoned the family when his first child turned out to be a girl. When he returned five years later and Van’s brother, Bao, was born, things didn’t get any better. Domestic violence ruled the home.

“My mother is my inspiration and always told me education was the way out,” recalls Van. “When I was 12, people from the United States and England came to our school to promote studying abroad, and I knew then that learning English would be my opportunity to leave Vietnam.”

Her English skills soared. She aced contest after contest, even winning the right to meet the President of Vietnam. She scored the highest grade in her city on a middle school graduation test that led to a full scholarship to high school—tuition, books, clothes, a monthly allowance. Even a year before graduating, after completing several Running Start college-level classes, her grades were good enough to get her into an American university.

“This scholarship is more than just financial aid. It’s validation. It’s emotional support. One day, I will do the same for others.”

Secretly saving money from a small business she’d built, Van’s mother paid her way to the U.S. to live with an aunt in Olympia.

Van enrolled in a community college and worked in the school cafeteria and as a nail technician and waitress. But after a year, the money ran out and she was forced to leave school. She moved to New York to live with another relative, where a boy she met robbed her of her meager savings and left her despondent.

“I wanted to take my life,” Van admits. “Going to school was everything I’d worked for and it was all being wasted.”

Sick, skinny and dehydrated, a botched medical procedure by a surly nurse was the turning point she needed to rediscover her determination.

“I couldn’t believe that someone who was supposed to be a healer was so mean,” Van says. “That’s when I saw the light and decided I wanted to go into health care, to change people’s live and make them smile.”

She returned to Washington, re-enrolled in community college and eventually earned her two-year degree to become a Registered Nurse. She had been in the U.S. for eight years.

Today, Van works as an RN at St. Joseph’s Medical Center while she studies for her Bachelor of Science in Nursing at UW Tacoma. After completing her BSN in 2018, she plans to pursue a Doctor of Nursing Practice degree and then a PhD.

“Being an RN is really powerful and I love doing bedside work,” Van explains. “But to be a leader in health care and to influence change, you need more education. I want to go back to Vietnam one day and bring the knowledge I gained here as a health care leader to influence women and the health care system there.”

When she found out she had received the Franciscan Foundation Endowed Scholarship, Van called her mother in Vietnam and the two women cried with joy.

“She asked me to send her the award letter so she could frame it. She’s so proud,” Van says with tears in her eyes. She has not seen her mother in nine years.

“A lot of people come here to pursue the American dream. If you don’t have support, it’s hard to make it,” says Van. “This scholarship is more than just financial aid. It’s validation. It’s emotional support. One day, I will do the same for other students.”