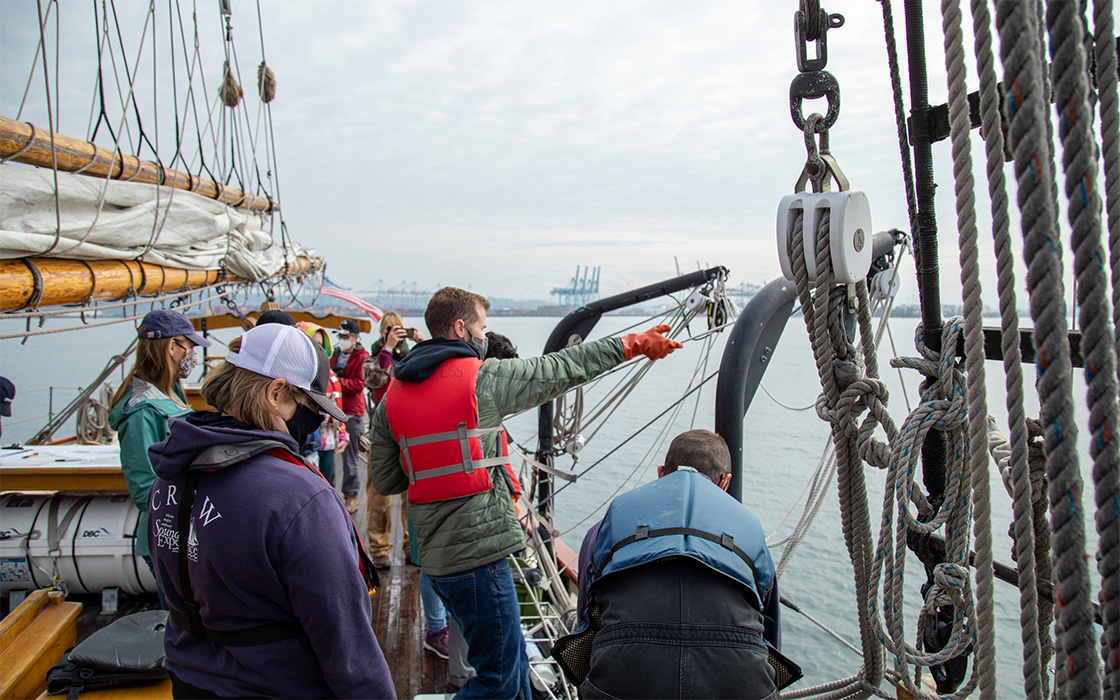 Take a deep dive into a research/instructional cruise on Commencement Bay. See science being done on an historic two-masted schooner.

On the podcast: hear what it sounds like when 20 people measure ocean acidification, examine phytoplankton, look for micro-plastics pollution and check water temperature and turbidity. And then there's the beluga whale sighting!

It’s a crisp morning in early October. The sun is low on the eastern horizon. The world is quiet, save a few passing cars and a handful of people milling about on the deck of the schooner Adventuress. UW Tacoma Associate Teaching Professor Julie Masura is one of those people. The educator is busy double-checking equipment that will be used on today’s research trip around Commencement Bay.

Masura is familiar with the Adventuress. She’s on the board of Sound Experience, the nonprofit that owns the ship, a 133-foot, 98-ton schooner that was built in 1913 as a pleasure yacht for a wealthy silver-mining baron. In 1914, the ship was acquired by the San Francisco Bar Pilots and spent three decades guiding commercial vessels through the Golden Gate. After twenty years of uncertain status and relocation to Puget Sound, Adventuress became the centerpiece of youth sail training, coming under Sound Experience ownership in the late 1980s.

Masura has taken part in a variety of educational programs aboard the Adventuress. This trip is different. A few months ago, Masura and Associate Vice Chancellor for Research Cheryl Greengrove got to talking. The pandemic made it difficult for students to get experience working in the field. Masura and Greengrove wanted to do something about that and quickly decided to have groups of students accompany them on the Adventuress to help conduct research.

Masura and Greengrove are noted marine scientists. The pair are currently working together on a project to study toxic algae in Puget Sound. Masura is also doing work on microplastics in the Sound. Both understand the value of “getting your hands dirty” and have come up with a four-hour research crash course that is meant to be hands on, informative and, well, fun.

A group of about twenty current students and alumni trickle down the ramp at the Foss Waterway Seaport Dock. They hand over signed release forms and get their temperature checked and are greeted with a wide smile and a hearty “welcome aboard” from Masura. A few minutes later the ship is unmoored from the dock. The Adventuress’ motor roars to life and the adventure begins.