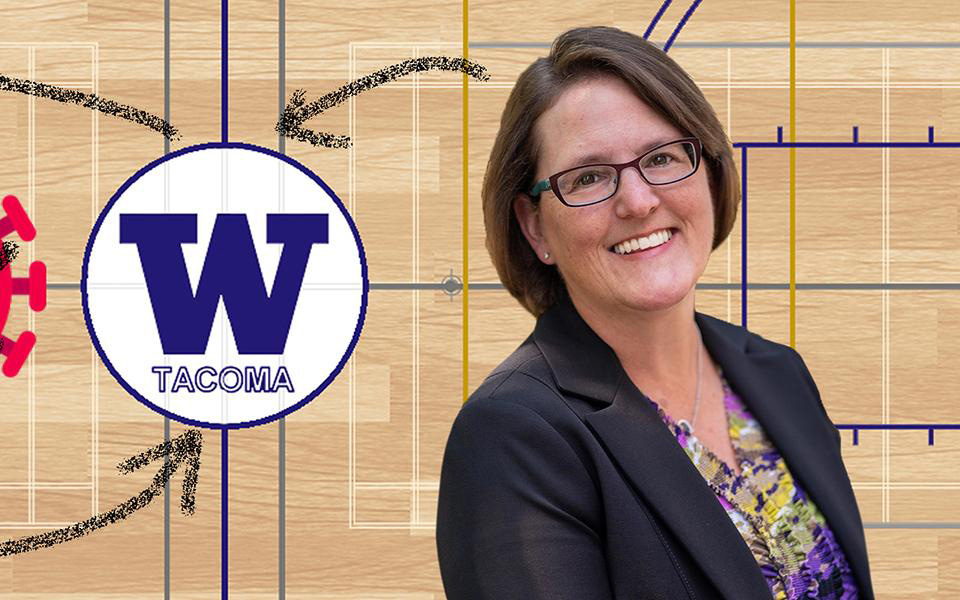 Coming Through in the Clutch

As UW returns to in-person instruction, Darcy Janzen and her team at the Office of Digital Learning learned a lot from the past year.

There is a lot of debate in the world of sports commentary about who’s better in the “clutch.” In this case, “clutch” refers to the waning moments of a close game. The conversation tends to focus on basketball, though the scenario is applicable to most sports.

We’re going to stick with basketball for reasons that will become clear momentarily. Talking heads on ESPN or Twitter are seemingly always going back-and-forth about who is the best “clutch” player in history, that is, the person most likely to drain the game-winning basket as the shot clock expires. Is it Michael Jordan or Lebron James? Cynthia Cooper or Sue Bird?

Darcy Janzen doesn’t get to play much basketball anymore. The Lakes High School graduate received a scholarship to play point guard at Tacoma Community College back in the early 1990s. She’s good with a basketball but that’s not what makes her clutch.

It’s early March of 2020. The University of Washington, responding to rising number of COVID-19 cases in the state, decides to switch to remote operations. The announcement comes on a Friday and remote instruction is set to begin the following Monday. “It was my job to help faculty make the transition from face-to-face instruction to remote teaching as quickly as possible,” said Janzen. “We basically just triaged and did nonstop workshops multiple times a day, held virtual office hours, and provided 24/7 support to faculty for weeks and weeks.”

Born in New York, Janzen moved to Arizona at age seven (her dad served in both the U.S. Navy and the U.S. Air Force) before settling in the Tacoma area at age 13. Janzen is the youngest of three siblings which may partially explain why she’s often described as “scrappy.”

Janzen came to campus as an undergraduate in 1994 and has been here ever since. She earned a bachelor’s degree in comparative international studies as well as a master of education from UW Tacoma. Janzen would later complete an Ed.D. in instructional systems technology through Indiana University.

Janzen currently serves as the Director of Digital Learning. She started working on campus around the same time she began work on her bachelor’s degree. “I actually got offered a temporary position in the dean’s office which turned into a permanent position,” said Janzen. At the time, the head of UW Tacoma, Vicky Carwein, held the title of dean instead of chancellor.

The dean’s office would serve as Janzen’s work home until 1999 when she switched over to Information Technology (IT). “A lot of the work I did in the dean’s office involved technology support,” she said. “I had been moving that direction professionally for a while so I decided to make the change.” Janzen’s role in IT morphed over the years and eventually turned into the position she has now.

Elite athletes train their entire lives for those big, high pressure, high-stakes moments. Janzen spent years solving tech-related problems as well as studying the intersection of education and technology. One could argue these experiences were training for her “moment.”

College courses, like most everything in higher education, are the result of careful planning and deliberation. The trick for Janzen in the wake of the rapid change to remote instruction was finding a way to help faculty move their classes to a remote format, essentially overnight. “That is what differentiates remote teaching from online learning. It would typically take months to design an online course based on solid pedagogy and structure.” said Janzen. “This was more ‘I need to move my face-to-face class into a Canvas course shell and it needs to be organized in a way that preserves the student experience.’ In both situations, my priority is always to promote instructional design and delivery that is student-centered, establishes a climate that fosters belonging and inclusiveness, and engages students in a way that promotes their learning and success.”

Team of the Year

Each year the UW Tacoma Staff Association puts out a call for nominations for the Team of the Year Award. The nominees are then voted on by the Staff Assocation Executive Board. The Office of Digitial Learning was nominated and ultimately named Team of the Year. The recipients of the award receive a plaque, as well as $1,000 in professional development funds.

Janzen and her newly-hired team member, Chris Lott, worked long hours bringing faculty up to speed on Canvas and leveraging technology so faculty could get their courses up and running remotely. In between, she fielded questions and troubleshooted for those who were having issues. Those early days and weeks were a blur of Zoom calls, emails, hot chocolate and limited sleep. “I kind of thrive in those situations,” said Janzen. “It’s just like, ‘This is what needs to be done, so let’s get it done.’”

It is tough to know whether a “new normal” exists. The pandemic is not over. These are fluid times where the situation can change from one day to the next. Still, Janzen is thinking about the future. “The pandemic brought forth a lot of questions surrounding hybrid and online education that we have not addressed on campus,” she said. “I really think this presented us with an opportunity as a campus, and for me as the director of digital learning, to finally explore and reimagine how we can move forward with more hybrid and online offerings for students in a strategic and thoughtful way. I think there is a sweet spot that will allow more flexible learning opportunities for students while preserving their need and desire for campus connection, deeper learning experiences and engagement.”

Janzen developed a plan pre-pandemic to work with faculty around issues of online education. COVID may have moved up her timetable but it didn’t alter her overall goals. “Faculty are the subject matter experts,” she said. “What we want to do is partner with them and learn about what they do in their-face-to-face classes to determine how it can be transformed into an exemplary hybrid or online learning experience for their students.”

The other components of Janzen’s strategy include collaborating with faculty to find out what structure, activities and assessments engage students and provide the best opportunity to learn in a hybrid or online format. “Our primary goal is to have a learning environment that is conducive to student success,” she said.

Finally, these past 18 months stressed to Janzen the importance of communication. “We ran into some issues early on with folks not knowing what to do and where to go,” she said. “Improving on this means reflecting on what we just experienced, reaching out to others on campus and building relationships as well as collecting information about where the information gaps exist. I think this will be key in the next pandemic or next situation that emerges,” said Janzen.

There used to be a basketball court in the middle of campus. The hoop lived inside the Dawg Shed on the spot where William W. Philip Hall now stands. “I used to go over there on my break and play with some of the faculty and facilities crew,” said Janzen.