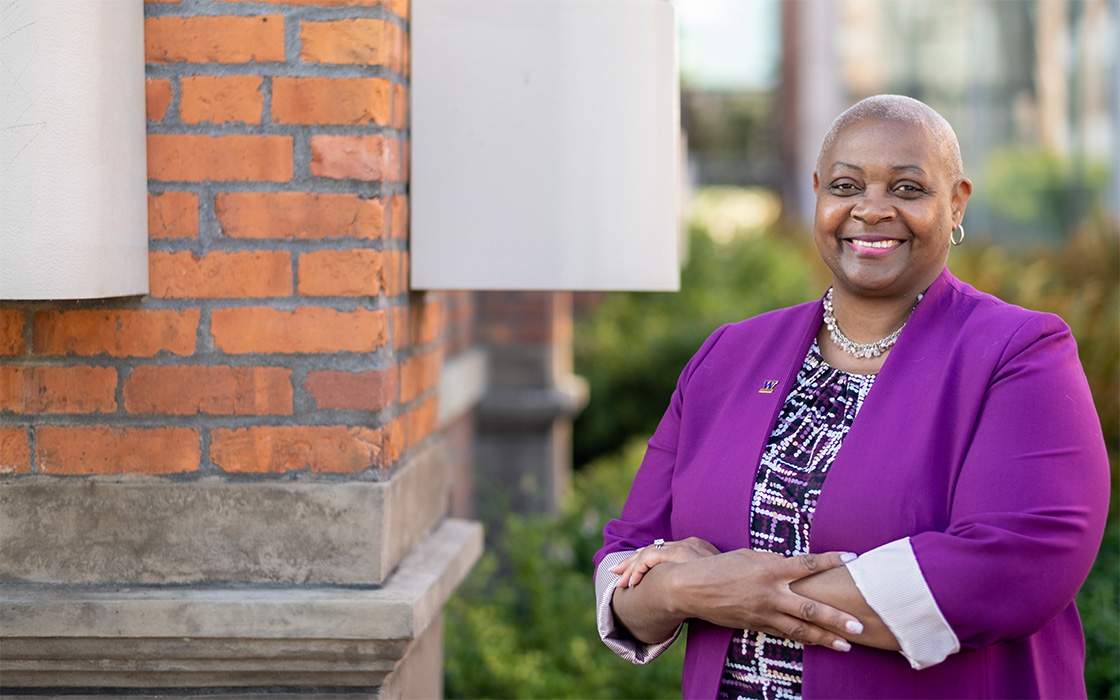 As Chancellor Sheila Edwards Lange begins her new role, she reflects on her personal journey and her vision for UW Tacoma's future.

“I don’t take myself that seriously. I laugh at myself a lot.”

“This is serious, meaningful and impactful work. It’s not easy. There are so many challenges we are dealing with. But the work brings me joy. I love surrounding myself with people who are passionate as I am, but who recognize that we just have to take joy, we just have to be able to laugh at ourselves.”

Lange brings to UW Tacoma an outstanding reputation in higher education administration and an iPhone contacts list overflowing with movers and shakers. Many are in the South Sound and are already well-connected to campus, but many are “up north” for whom a UW campus in the South Sound is still an unknown quantity.

Lange was recently a guest in the President’s Box at Husky Stadium, for a UW football game. It was her first time in that space since her appointment to UW Tacoma had been announced.

“Walking into that space was like ‘old home week,’” she said. “I got both my graduate degrees at UW, and spent more than half of my professional career at UW, so I know a lot of people on the Seattle campus.”

Lange laughs as she thinks about herself in that setting. “It’s just little old me, from a backwoods corner of the South!”

That Lange can laugh at herself is a testament to the healing power of community, and the basic humility that comes with being a true visionary.

Lange was born and spent the first 10 years of her life in rural Mississippi.

“I tell people I’m from Meridian. But, actually, it’s a little county road, off the main highway, near a place called Pachuta, Mississippi. The name sounds strange to some, but it’s an Americanization of an old Choctaw word that is the name of a creek flowing through the area. It is said to mean ‘pigeons roost there.’

“Pachuta is a half-hour south of Meridian, but where my community is centered was 10 miles south of that, along County Road 290.

“We lived across the road from a church that my grandfather founded, the East Baptist Church. It’s still there, as is the brick house I grew up in. You can see it on Google Maps.”

Lange laughs. “It’s almost frightening the level of detail you can see on Google Maps! But looking at it does bring back a lot of heartwarming memories of my life in that community.”

Lange grew up just as the U.S., and particularly the South, were emerging from the Jim Crow era. Mississippi had its share of the awful history of that and earlier periods.

Near Pachuta, in a town called Shubuta, is the site of the infamous Hanging Bridge, where as many as eight African Americans were lynched in two incidents, one in 1918 and the other in 1942.

And Mississippi was fully engaged in the so-called “separate but equal” doctrine, propped up by “Jim Crow” laws, whose dismantlement wasn’t begun until the passage of the Civil Rights Act of 1964 and the Voting Rights Act of 1965.

Despite the pernicious and humiliating impacts of the segregation that was the fact of life at that time, Lange notes that not all was bleak.

“There were strong women in my community growing up, women who I call my ‘aunties.’ They instilled this learning ethic in me, especially around being Black.

“These aunties were not easy on me and my siblings. There was no sparing the rod! If you didn’t behave or live up to expectations … let’s just say they had no hesitation about disciplining us, and setting us straight about anything.

“I like to think I’m still that really curious kid who asked a lot of questions and who read the dictionary for fun, just because I wanted to know more stuff.”
——UW Tacoma Chancellor Sheila Edwards Lange

“And, boy, do I love them all for it today,” Lange says, laughing as she remembers how word would get back to her mother about some expectation she didn’t meet.

“The church across the street, East Baptist Church, had a Head Start program, and I attended that. All of my teachers were community people. I learned to read at age four from my aunties.

“It was a place of such love and affirmation for who I was as a little kid. I like to think I’m still that really curious kid who asked a lot of questions and who read the dictionary for fun, just because I wanted to know more stuff.”

Lange had her own experience with racial hate. In a profile in Seattle Business Magazine, she described her first-grade experience:

“I started school in 1968, a really volatile year. My first-grade teacher was just so evil. She put me in the back of the room and said, ‘I don’t want little n***** [not redacted in the original] in my class. You sit back here and be quiet.’”

Lange says that her experience with that first-grade teacher hurt, “but it was mitigated by having a community that embraced me as a little kid.”

“To be honest, in 1968 most of us were experiencing teachers like that teacher. Fortunately, I got out of that class and got moved into a class with a teacher who had come down from the north with a civil rights mission, a white woman who saw it as her mission to make sure that Black kids were getting education.

Lange laughs when asked if she has any brothers or sisters. “Oh, yeah. Oh, Lord, yes!”

Lange’s parents divorced when she was ten. When they divorced, Lange’s mom took Lange and her three (at the time) siblings to start a new life in southern California.

“She was a single mom, without a high school diploma, and four kids. She literally had to start her life over.”

She went to a local community college to get her GED, got a legal secretary credential, and then got a job in that field.

“To this day, I am so moved by what my mom did to support her family. After she remarried, she opened and ran a daycare center. Eventually she became the person responsible for inspecting and qualifying daycare centers for Sonoma County.”

“My path to college was pretty haphazard,” said Lange. “It wasn’t a concrete goal in my mind for a long time. Based on her own experience, my mom’s goal for me was pretty straightforward: don’t get pregnant and make sure you finish high school.

“But I loved learning, and it turned out I was good at it. In fifth grade, in California, I won a trophy for reading the most of anyone in my school. That kind of recognition, that maybe I was talented academically, spurred me on to keep going.

“I tell people, I went to college on a wing and a prayer!”
——UW Tacoma Chancellor Sheila Edwards Lange

“And even so, it wasn’t until my junior year in high school that the thought of college seriously entered my mind. Do you know how late it is to be thinking about college for the first time as a junior in high school?”

“It was my Spanish teacher. She had gone to Stanford. From the beginning, she was saying ‘You should really think about college.’

“The cost was a barrier. But this teacher, Mrs. Calhoun, paid the fees for my college applications. She helped me navigate the whole process. And I ended up getting a lot of scholarships. But even with all that, there was a lot I didn’t know.

“So, I tell people, I went to college on a wing and a prayer!”

Lange got her undergraduate degree at University of California, Irvine, in an interdisciplinary major called social ecology. She went on to receive a Master of Public Administration from UW’s Evans School of Public Affairs, and a Ph.D. in educational leadership and policy studies from the UW College of Education.

Lange’s own experiences — early learning in Mississippi, key mentors during her K-12 years, the support of her family and community, being a first-generation college student — help inform her vision for UW Tacoma.

“We were founded in 1989 with a clear mission of expanding access to higher education, and we have been carrying out that mission ever since. Access is at the heart of our last strategic plan.

“And we have made a huge difference in the South Sound community. I have heard that over and over in the months since I first thought about taking this position as Chancellor and started talking to people.

“But there is still so much more we can be doing.

Pierce County has the lowest educational attainment rates of all of the urbanized Puget Sound counties, particularly compared to the neighboring King and Thurston counties.

Washington state as a whole is a net importer of college-educated people. As a state, Washington has among the highest rates of college degree attainment in the nation. “But that is due to the large numbers of people who move here for employment,” said Lange. “Those born and raised here in Washington, particularly among people of lower income and people of color, don’t yet have equal access to the benefits that flow from a college degree.”

“I believe UW Tacoma has been — and will continue to be — an innovator in expanding access to education. Here in the South Sound, but, now, increasingly, across Washington.

“I believe we have a moral imperative to do that. Every year that goes by with potential students not starting their college journey is time lost, here in the South Sound and across Washington, in our ability to benefit from the energy, the experiences and the wisdom of those voices.

“As we grow our campus — and I believe we must grow — how we grow is critically important."

Lange compares the UW Tacoma growth strategy to a three-legged stool. One leg is a focus on enriching and sustaining the excellence of a UW education. Another leg is expanding access to education for underserved populations locally and statewide. The third leg is continuing the campus’s heritage of intense connection to and partnership with the South Sound community.

“I believe we can balance all those things,” said Lange.

At this point, Lange is looking very serious. As if she realizes just how she is coming across, she suddenly bursts into laughter. Her seriousness is still there, but leavened with a self-directed humor that actually serves to strengthen her message.

“I am determined that this work will be filled with joy!”