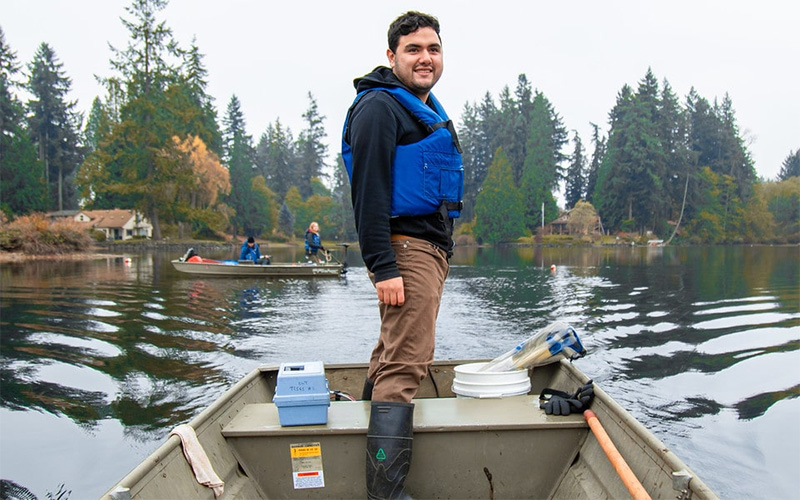 It's a Dirty Job

UW Tacoma alumnus Marco Barajas is happiest when he's knee deep in muck or up to his elbows in grease.

Marco Barajas isn’t afraid to get his hands dirty. “In high school, I did my senior project on food waste,” he said. “I wanted to know how much food gets thrown away by restaurants in Seattle.”  Barajas figured the most accurate way to get this data was by climbing into dumpsters—lots of them. “I’m not sure of the exact number but it had to be in the hundreds,” he said.

This rolling up the sleeves curiosity extends to all aspects of Barajas’ life. In his spare time he works on cars. “I have a project car,” he said. “I just recently put a new engine in it.” Barajas prefers Hondas but will happily take apart most anything. “I can completely break down a bicycle and put it back together in just a few minutes,” he said.

When he’s not fixing up automobiles, Barajas is wading through the muck as part of Associate Professor Jim Gawel’s research into arsenic in local lakes. Barajas graduated in 2018 with an environmental science degree. He began working with Gawel while still a student. “I spent an entire summer collecting crayfish and snails from different lakes in the area and would then analyze them for arsenic uptake,” he said.

Barajas’ involvement with the project has evolved over time. For starters, the work is no longer tied to a class. Barajas is now a part-time research technologist in Gawel’s lab. And, while he still enjoys going out in the field, nowadays Barajas is just as likely to be found looking through a microscope. He even got the chance to present at different conferences including the 2018 Oregon Lakes Association/Washington State Lake Protection Association Conference in Portland.

Barajas came to UW Tacoma in the fall of 2017 from South Seattle College. A first-generation student, he quickly found a home within environmental science. “I’m really interested in water quality but the diversity of courses within the major meant I had a range of options,” he said. “I could just have easily focused on something like forest fires if I wanted to.”

Graduate school is in Barajas’ future. He hasn’t decided which specific area he wants to study but he knows it will involve water quality. “Right now I’m focused on this project,” he said. “I’m analyzing a bunch of crayfish and I want to gather enough data to put out a paper.”

Education to Barajas is about more than personal growth. “My parents moved here from Mexico so my brother and I could get an education,” he said. “It would be a waste of their effort and sacrifice if I didn’t go all out.” Indeed, it’s a testament to how much college meant to the Barajas’ family, that Marco’s mother prepared for Commencement well ahead of time. “My mom had a dress picked out two years in advance and that’s the one she wore at the ceremony,” he said.

Barajas won’t be sifting through dumpsters anytime soon but that doesn’t mean he’s done exploring. Barajas is happiest when he’s knee deep in mud or up to his elbows in grease. “I just have to get my hands dirty,” he said. “if they’re clean for longer than a day, something isn’t right.”