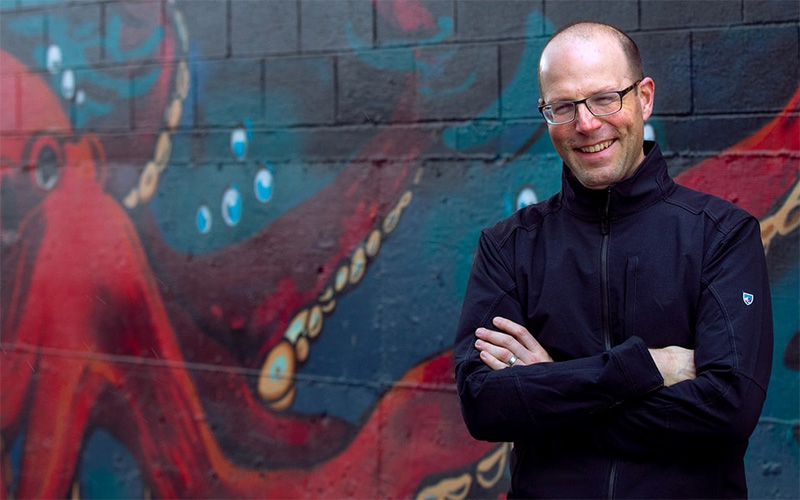 At an early age, Gladys (Sunya) Pratt was presented with a book of religions by her father who encouraged her to learn about each and choose a faith. Years later in a newspaper article from the Tacoma Times, she remembered, “I chose Buddhism, the most tolerant of religions,” which guided her as a valuable spiritual leader for Jodo Shinshu Buddhists in the Pacific Northwest for nearly 50 years.  After joining the Tacoma Buddhist Temple, she served the Japanese American community in Tacoma and had a lasting impact on Nisei - second-generation Japanese Americans - through teaching Buddhist principles in English.

This was one of the stories that Justin Wadland, Associate Director and Head of the Digital Scholarship Program at the UW Tacoma Library, discovered during his collaboration with Tamiko Nimura, a local freelance writer, to write a history of the Tacoma Buddhist Temple for HistoryLink, the Washington State history encyclopedia.  The importance of this project lies with its emphasis on community-engaged work and collaboration that tells the story of communities that have historic ties to land where the University is located.

Following his curiosity, Wadland has continued doing research into the life of Sunya Pratt and her involvement in the Tacoma Buddhist Temple and Japanese American community of Tacoma. Wadland and Nimura seek to understand the life and legacy of Pratt on a broader scale. Pratt immigrated to Seattle from Britain in 1919 with her husband, and other members of her family joined her in 1931 to settle in Tacoma. She became involved with the Tacoma Buddhist Temple where she volunteered to assist with Sunday School classes. At the time, lessons were taught in Japanese. Pratt quickly began leading some of these classes, teaching students about Buddhist principles. In offering lessons in English, enrollment in the Sunday School increased significantly, nearly overwhelming the available space at the temple. “She was so appreciated by second-generation Americans with Japanese parents, the Nisei, because she taught and spoke in English,” Wadland said. After becoming an established member of the Temple she adopted the name “Sunya”, which is derived from the Sanskrit word for “emptiness”, a core value expressing wisdom in Buddhism.

Pratt provided adult education by organizing study groups in the evenings at the temple, actively engaging members as they learned about religious texts and principles. When hearing of her work, many other temples from Seattle to Portland began requesting her services as a teacher and leader within the Buddhist community. Soon she was busy throughout western Washington and down into Oregon. Pratt was ordained in 1936, officially becoming a Buddhist minister, and continued to grow within the Japanese American community as a teacher for the Tacoma temple’s Dharma School.

Located near the corner of Fawcett Ave. and S. 17th St., the Tacoma Buddhist Temple is the last existing organization that has ties to the historic Japantown that once flourished in downtown Tacoma. As Japanese immigrants began to settle in this region in the late 1880s and Tacoma grew into a booming railway-focused metropolis, Japanese immigrants began developing parts of downtown by opening up businesses such as restaurants, grocery stores, and laundromats. Encompassing eight blocks in downtown Tacoma, there were over 1,700 residents in Japantown at its peak in the 1920s and ’30s, bound together by shared language, culture, and tradition. “By the 1940s, there were 181 Japanese-owned businesses in downtown Tacoma, reaching an all-time high that was encouraged by the growing industry of shipyard workers in the area,” Nimura said.

Some of what was Japantown overlapped the modern boundaries of what is today the UW Tacoma campus. Another significant monument in the community was the Japanese Language School (Nihongo Gakko), located at the time at S. 17th St. and Tacoma Ave., just up the hill from the Tacoma Buddhist Temple. The School is commemorated today by Maru, a Gerard Tsutakawa sculpture on the portion of the Prairie Line Trail that bisects UW Tacoma.  UW Tacoma Professors Mary Hanneman and Lisa Hoffman have also worked to preserve the history of the Japanese Language School through their Oral History Project that collected over 40 interviews with former students in 2003.

The very existence of Japantown changed in early 1942 when President Franklin D. Roosevelt signed Executive Order 9066, shortly after the U.S. declared war on Japan The order authorized the mass forced removal and incarceration of Japanese Americans. Reverend Gikan Nishinaga was arrested with 32 other leaders in an FBI raid. Other temple members were forced onto trains to be taken to Pinedale Assembly Center, an internment camp located outside Fresno, California. Buddhists from Japanese American communities in Seattle were bussed to Camp Harmony in Pierce County, where Pratt continued to serve the community of which she had grown to be a part. “Even during the Japanese Internment, Pratt continued to work with the Buddhist community in Camp Harmony,” Nimura said, referencing the assembly center  that was on what is now the Puyallup Fairgrounds, “She would go every Sunday to give Sunday School lessons to the children.”

The temple reopened in 1945 as internment came to an end. “Some memories of Pratt’s role during the post-war years have been preserved in the 50th Anniversary Testimonial Book, presented to her in 1984.  Inside were letters and notes sharing memories and thanking Pratt for her 50 years of dedicated service to the temple. One of her former students wrote, “Later, during the Sangha classes you taught for 9th graders, you gave me another unforgettable lesson. You said that there are as many ways to become a Buddhist as there are human beings and that enlightenment can be described as the fulfillment of each person’s character. Again, I learned that it is natural to be different from everyone else and to be appreciative of each person’s differences.”

In Pratt’s 50 years of serving the Tacoma Buddhist Temple, she was greatly beloved by the sangha — or spiritual community — and received multiple awards for her efforts. “Pratt seemed to fall in love with the Buddhist community in Tacoma and had a regional impact on Buddhist education, particularly for young people,” Nimura said.