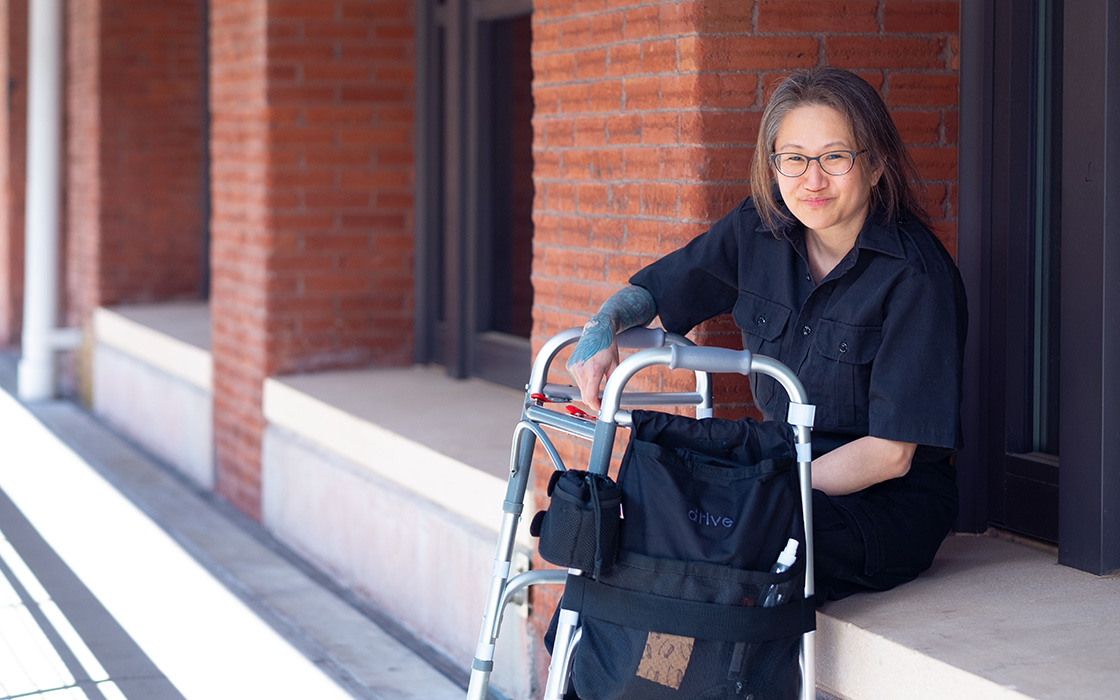 A traumatic brain injury threatened to derail Rain Wilson's college career; but then she got the support she needed and she is now succeeding.

2016 was a pivotal year for Rain Wilson. That was the year she married her wife, Kobi Wilson, the year she began going to UW Tacoma and the year she was diagnosed with a traumatic brain injury (TBI). “I had been struggling all through the whole academic system and was totally lost,” she said. The TBI caused sensory and motor issues, audio, speaking and language lapses and Attention-Deficit Hyperactivity Disorder (ADHD). “It was pretty hard,” she said.

Wilson is not, by her own admission, a natural college student. She does not sit in class, quietly soaking up information while taking notes. In fact, much of her schooling throughout her life has been a struggle, from kindergarten onward. But for Wilson, the struggle has helped create purpose, focus and a love for learning.

In 1976, then-four-year-old Wilson was involved in a car accident that left her with the traumatic brain injury that wouldn’t be diagnosed until 40 years later. At the time TBIs weren’t well understood. “I had to learn to walk and talk again,” she said. “Everybody thought I was just fine, but I really wasn’t. I could do okay with the things I was learning that were rule-based, but when I had to remember things, I didn’t do very well.”

Wilson graduated from high school in 1990 and earned an associate’s degree from Bellevue College in 2016. The intervening 26 years were hard for Wilson academically. “I went through academic probation, academic dismissal, in and out of school,” she said. “I didn’t even know that I had a brain injury back then,” Wilson said. “I didn’t even get accommodations before going to Bellevue.”

Those accommodations helped Wilson. “I tested really low in math and had to take algebra I and II again in order to graduate and I had to take an English 200-level class,” Wilson said. “I got a really good tutor and had two good math teachers and it just made a difference for me.”

Where once she struggled, Wilson started succeeding. She made the Phi Theta Kappa honor society and got straight A’s in her courses, and with support from her wife applied for and was accepted to UW Tacoma. When she graduated from Bellevue College, she was given a gold cord for Phi Theta Kappa. “I was completely shocked when I went to pick up the cap and gown and they gave me that cord,” she said. “I was sure they were mistaken. I’m still shocked.”

Encouraged by Kobi, in 2015 and 2016, Wilson had cognitive testing done at UW in Seattle to learn more about her learning disabilities. “I scored high on visual and spatial ability, which tested at the 98th percentile,” said Wilson. Other tests revealed weaknesses in areas around memory, recall and cognitive processing, but in visual and spatial ability, she was nearly off the charts. “I can look at something and tell if it will go in that space or not — I can see shapes and things in my head really well,” she said. The doctor who headed the testing wanted to meet her because, she said, “he’d never seen a score that high before. Things like geometry and topology are really good for me.”

Wilson is a first-generation Japanese-American student. “My father was born at Poston Internment Camp in Arizona,” Wilson said. “He’s still severely affected by it.” She had a falling out with her parents (they’ve since reconciled) and left home in her twenties, moving around to several places and finally coming north to Seattle.

Wilson, now 50 years old, is a senior working toward a degree in math. “I’m working with my faculty advisor, Dr. Ruth Vanderpool, on algebraic topology, manipulating spaces and that kind of thing,” she said. “I’d really like to teach at the college level as well as do research.”

In addition to her studies, Wilson has worked on campus climate. In a focus group representing students with disabilities, Wilson helped to influence questions on the 2019 UW Climate Survey and serves on the UW Tacoma Climate Monitoring Committee. The committee focuses on keeping the culture and climate of campus life on a positive track by monitoring progress on findings from the 2019 survey. Wilson has been on the committee and its predecessors for several years and is one of the contributors to the 2019 survey’s questions.

“I love being back on campus,” Wilson said. “After two years of the pandemic, it feels so good to be back and seeing people.” She also feels especially close to her faculty advisor and professors. “I’ve cried on her (Dr. Vanderpool’s) shoulder so many times,” said Wilson. “Whenever she’s had a break or an opportunity, she works with me. They’re great in that department. I love them,” she said.

The struggles for Wilson have been many and while she says there were countless obstacles in her way, overcoming them has become her life’s work. “Commitment is one of those valuable things to have and to give to people,” she said. “I love what I’m doing.”