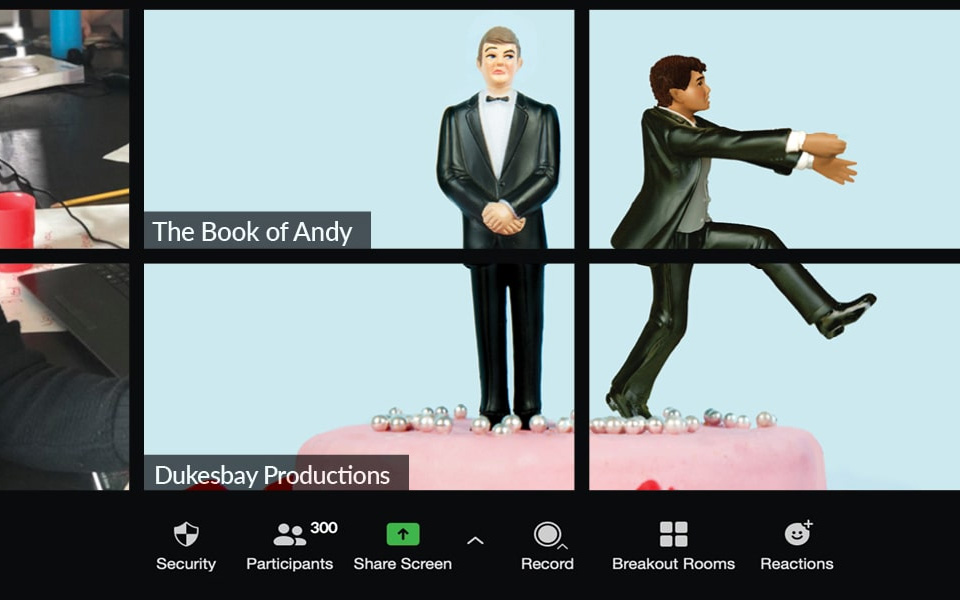 Theater at UW Tacoma goes virtual with the upcoming performance of "The Book of Andy."

Theater at UW Tacoma had just started to blossom when the pandemic began. The first live, on-campus theatrical performance took place back in 2014. That effort involved a loose band of students, staff and faculty. Think of this initial success as a seed that allowed the program to grow to include two plays a year, the launch of UW Tacoma’s first theater class and the hiring of Maria-Tania Bandes Becerra-Weingarden as the university’s first full-time theater faculty member.

Bandes B. Weingarden arrived on campus in the fall of 2018 and quickly got to work. She directed “Mojada” by Luis Alfaro, a blending of Euripides’ classic with Mexican folklore, then set her sights on something more ambitious — a musical. The rock opera “Next to Normal” had been cast. The dates were set, and rehearsals were underway. Then the pandemic hit. Performances around the world were canceled, including at UW Tacoma.

Not to be deterred, Bandes. B. Weingarden found other avenues to showcase the creative talent on campus. She put together the virtual variety show “Cabaret 19” and is now in the process of creating a live-streamed episodic play called “Book of Andy.” “There’s a learning curve to making this work but I think I was more fearful of not producing something,” she said. “I just thought, well, I can’t go an entire academic year and not produce something.”

The “learning curve” Bandes B. Weingarden speaks of refers to the challenges of producing a live show that can’t be viewed in-person. “Auditions happened on Zoom and rehearsals will also happen on Zoom,” she said.

The eight-person cast consists of four community members and four UW Tacoma students. Bandes B. Weingarden partnered with Tacoma Arts Live and local theater group Dukesbay Productions on the project. The trio applied for and received a grant from the City of Tacoma. “These funds will allow us to pay our community actors a competitive wage,” she said. “This will provide some financial relief to artists in our community who are not making money right now.”

Playwright Michael J. Meija wrote “The Book of Andy.” The play, “explores the world of modern dating through the eyes of a gay man who is suddenly hit with the intensity and surprise of marriage.” Bandes B. Weingarden reached out to Meija to talk about adapting the play for a virtual environment. “He embraced the idea and actually went one step further,” she said. “He rewrote quite a bit of it for this performance.”

The show will be broken up into four, 25-to-30-minute chapters. “We decided to do it this way because there’s a lot of Zoom fatigue out there,” said Bandes B. Weingarden.

The first chapter airs on Saturday, February 13. The second will be performed a week later with the third and fourth chapters coming on successive Saturdays. The play will be recorded for those who miss the live performances. Bandes B. Weingarden is still deliberating on what platform to use. Regardless, access to the live stream will come via a link on the Tacoma Arts Live website. The show is free for both UW Tacoma students and the community.

Choosing a platform is one of many things Bandes B. Weingarden has to figure out. “Normally we spend a lot of time in rehearsals working on movement,” she said. “This time we don’t have this to contend with in the same degree as a live show, but we’ll still need to figure out lighting, props and what to do if there’s a glitch.”

It’s important to remember that all of the actors will be performing from their homes. Bandes B. Weingarden can’t drive over and help adjust the lighting or camera angle so she’ll have to issue instructions over Zoom and because these are residences, and not a managed stage, anything could happen. “A door could open, or someone could walk in during the performance and we have to be prepared for that,” she said.