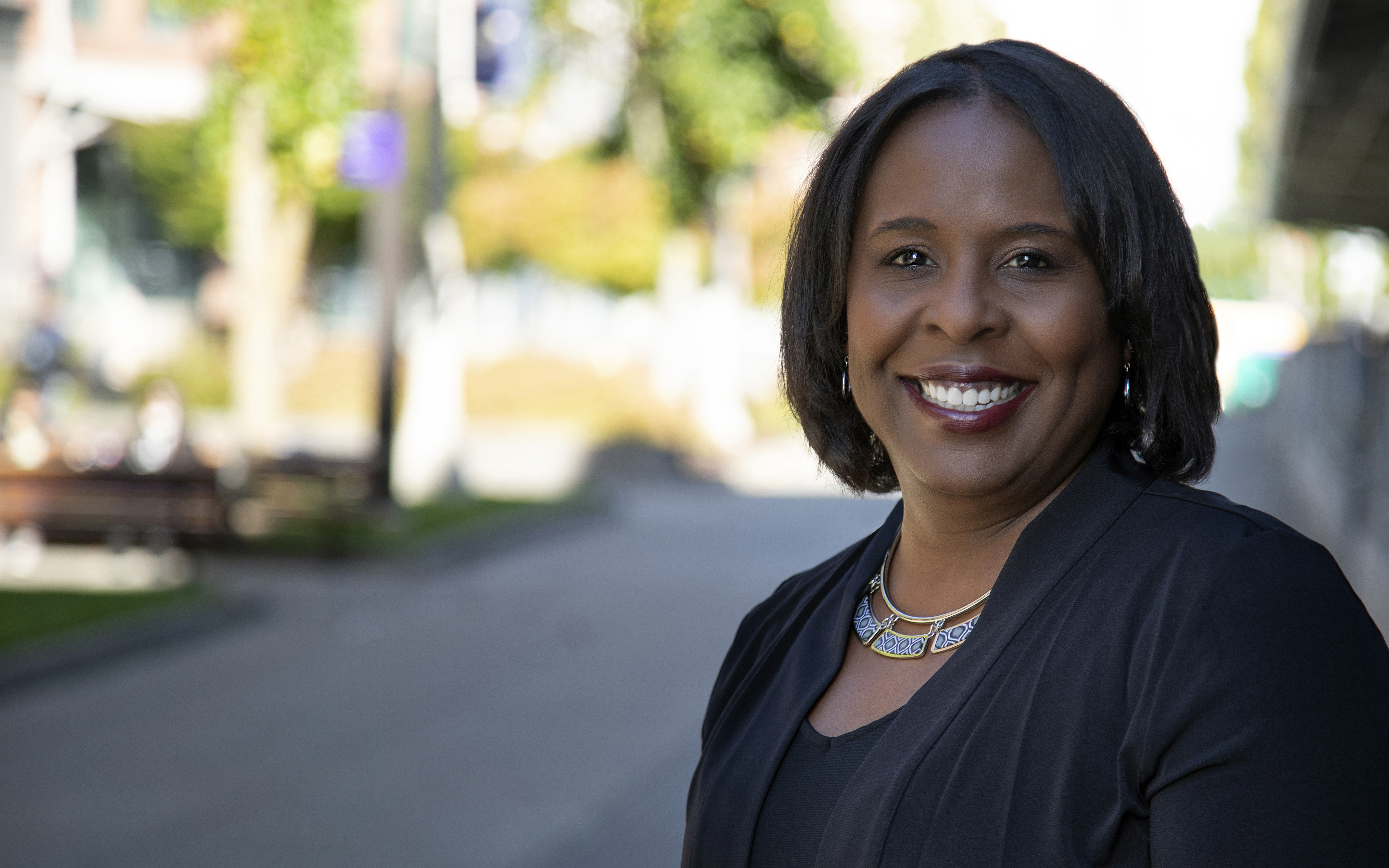 Someone to Look Up To

Social Work & Criminal Justice Dean Keva Miller has become a person like those who nurtured and mentored her throughout her life — someone whom others look up to.

Education is often thought of as an individual pursuit. A person goes to college. They attend classes and do homework. Their long hours of study are rewarded with a degree. While it is true that the individual is ultimately assigned a grade and their name goes on the diploma, that’s not the entire story. Along the way, there were mentors — maybe a fellow student, tutor, instructor or even a family member — who offered assistance. This help could take the form of providing notes to someone who missed class or talking through an especially difficult concept.

The idea that an individual goes to college also ignores the life a person lived before coming to campus. Each student carries with them a history, both their own, and a larger familial story. Some of these stories are difficult, while some offer inspiration. For Keva Miller, the Inaugural Dean of the School of Social Work and Criminal Justice, it’s the latter.

Miller’s grandparents grew up in the Jim Crow Era South. Her grandfather was a sharecropper. Laws and the Supreme Court precedent established in Plessy v. Ferguson of “Separate but equal” made it difficult for Black children of the era to receive a quality education. “She [Miller’s grandmother] had a first-grade education,” said Miller. “It was important for her that her children, and subsequently her grandchildren, received an education.”

Both of Miller’s parents earned bachelor’s degrees. Her father also received a master’s in education. Miller’s mother and father were both educators. Her brother has a degree in education. In only a generation, higher education in Miller’s family went from unattainable to almost expected. “My parents never told me I had to go to college, I just grew up thinking it was the next logical step, like it was thirteenth grade,” she said. “I attribute a lot of that to my grandmother.”

There’s a refrain to Miller’s life. Often, at key moments, a figure in her life stepped in as a sort of role model. As a child, Miller’s parents had a friend that she describes as, “a very strong, powerful African American woman.” This family friend worked in the field of child welfare. “She would talk about the work that she did and, I thought, ‘that is amazing,’ ” said Miller.

Fast forward a decade and Miller is a first-year student at the University of Texas at Austin (UT-Austin). She’s decided to major in business, but the fit isn’t quite right. “I had a roommate who was a social work major,” said Miller. “I found myself being jealous of the work that she was doing and what she was studying.”

Miller decided to make the switch from business to social work. She went on to earn a bachelor’s and master’s of social work from UT-Austin before completing a Ph.D. in philosophy at Fordham University.  Between the end of her master’s and start of her Ph.D., Miller worked as a non-tenure track professor at UT-Austin. “My dean was an African American woman, a very powerful and unapologetic leader that really cared for students, faculty and staff,” said Miller. “I was just amazed by how she carried herself and the ways in which people respected her. This was the late 1990s and it was rare to see someone who looked like me in that kind of a position. After a couple of years working with, and for her, I said, ‘When I grow up, I want to be her.’ ”

To say Miller has been prolific is an understatement. She worked as a practicing social worker for six years in the late 90s/early 2000s – this while teaching courses at UT-Austin and conducting research. “I really fell in love with research while at Fordham,” she said.

Miller’s research explores the criminal justice and child welfare systems. “A lot of my scholarship looks at the racial disproportionality and disparities in both systems,” she said. “Specifically, my work focuses on the experiences of children and families who are minoritized.”

Miller taught at UT-Austin as well as Fordham University and Columbia University before taking a position as an assistant professor at Portland State University (PSU). Miller describes herself as someone who, “takes on multiple roles.” This is true of her 13 years at PSU. While at PSU, she served as assistant professor, director of the Master in Social Work program, associate professor, acting dean, associate dean for academic affairs and professor.

While at Portland State, Miller built up a profile as a renowned scholar and a talented leader. She created a home for herself and seemed content with her professional life. “Around year 10, I remember thinking, ‘I think this is where I’m going to retire,’ ” she said. “It’s going to take something really incredible to pull me away from here, because this is my home.”

Turns out that “something incredible” was UW Tacoma and the newly-elevated School of Social Work & Criminal Justice. Miller is the inaugural dean of the school. She started in this role on August 1. “Portland State has an access-driven mission and is urban-serving and so is UW Tacoma,” she said. “There’s also a lot of talent within the School of Social Work & Criminal Justice and I found that to be very exciting.”

Miller’s experience at the intersection of social work and criminal justice gives her a unique understanding of the present moment. Indeed, the local and national conversation in recent years has focused on the role of law enforcement. The debate is complex, but one component revolves around whether a different response is needed – say, dispatching a social worker to a scene instead of a police officer.

The two disciplines overlap, and in this space there can be tension. Miller understands this relationship and seeks to find a way forward. “Finding that middle ground or finding ways for people to move from their stance can be challenging,” she said. “I hope that our colleagues can not only be part of that conversation but be at the center of it.”

“There aren’t many schools of social work and criminal justice that have the expertise we have and that can lend itself to be a prominent voice locally, statewide and nationally,”
— UW Tacoma Social Work & Criminal Justice Dean Keva Miller

Some of Miller’s vision has already come into focus. “Clearly my vision is to promote social justice and organizational excellence,” she said. “What does that look like? That looks like promoting research and teaching excellence, ensuring that we’re fiscally sustainable and that we’re working with the community.”

Miller will spend the coming year talking with various stakeholders, whether that’s students, faculty, staff, alumni or the community. From there she’ll build a strategic plan that outlines the school’s short and long-term goals. “We are going to establish who we are, our uniqueness as well as what we have to offer, not only to the university and our students, but to our entire community,” she said.

Someone to look up to

There have been different sources of inspiration for Keva Miller. Her grandmother, her parents, a family friend and a colleague. Miller strived, not to be them, but to be like them. The people she looked up to were/are intelligent, respected and passionate. Miller is all of these things.

One can’t help but think that Miller has become the one people look up to. That right now, there’s a student or faculty member who wants to be like her.