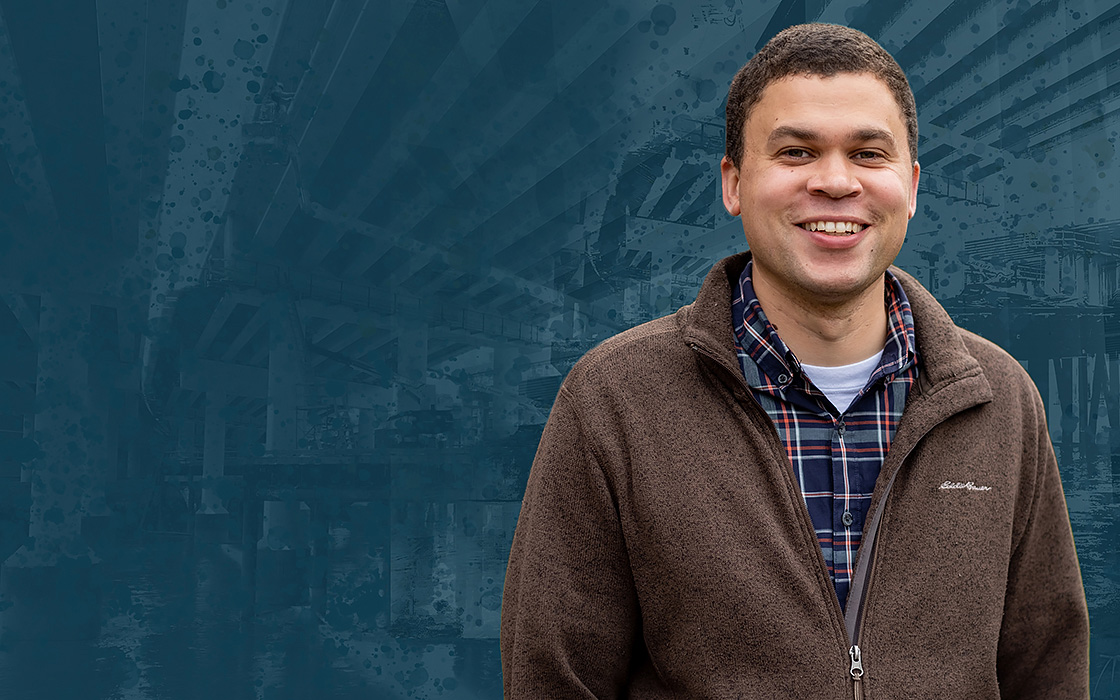 Lorne Arnold has always loved building things. Arnold was that LEGO-obsessed kid who followed the instructions to the letter. This desire to create stayed with Arnold. A Tacoma native and graduate of the city’s Covenant High School, Arnold remembers watching the third Tacoma Narrows bridge being built during his high school years. “Civil engineering was very much a topic that we were all talking about,” he said.

A job-shadowing opportunity with a local architecture firm solidified Arnold’s burgeoning curiosity. “I thought, ‘Yeah, I could see myself doing this,’” he said. “I thought it was cool, so I decided to pursue engineering up at UW Seattle.” Arnold earned a bachelor's in civil engineering as well as a master's and Ph.D. in geotechnical engineering from UW.

After completing his bachelor's, Arnold worked as a geotechnical engineer for the Seattle-based Hart Crowser. His job in Seattle took him back to places like the Port of Tacoma and the new southbound bridge over the Puyallup River along I-5. Arnold’s work dealt with ground improvement to avoid earthquake-induced erosion and soil liquefaction, conditions that cause soil to act like a liquid and become unstable.

Arnold lived in Tacoma when he worked for Hart Crowser. Over time he developed an interest in teaching and the world of academia. Arnold wanted to stay in Tacoma and he also wanted to transition into higher education. “I thought I’d have to choose between living in Tacoma and being in academia until UW Tacoma started the civil engineering program,” he said.  “This opportunity came in my own backyard and I was like, ‘Hey, I’ve always wanted to do that – let’s go for it,’” he said.

Arnold came to UW Tacoma in September 2021 to be part of the new program. He is already designing classes and will work with students on developing what program chair Dr. Emese Hadnagy called “a community of fixers.” The program will focus on teaching the basics of civil engineering to students – what goes into building the roads, bridges, airports, dams and structures that become an essential part of our lives.

Civil engineering is a growing field. It’s also a collaborative field with many different disciplines coming together to solve community problems and that’s important to Arnold.

“For example, the bridge carrying Pacific Avenue across I-5 in Tacoma — I did work on that,” he said. “But I was one of several dozen people from multiple disciplines that all had to work together to coordinate. That’s one of the things we really want our students to learn and understand: not to think and work in silos.”

The civil engineering program is being built to allow students to learn both on and off campus. Community partnerships and internships are being created to allow students a breadth of opportunities. The program will also make use of the new Milgard Hall, which is scheduled for completion in January 2023.

Those community partnerships, like the ones Arnold participated in via a career-day event in high school, are, he believes, key to the new program. “There is a lot of excitement within our group,” he said. Arnold says that the City of Tacoma is also excited. “The speed at which we’ve been meeting people has been really cool, and everybody’s like, ‘Yeah, bring your students, consider the city your classroom,’” he said.

For Arnold, the value of the civil engineering program’s focus is that collaborative piece. “In my experience, most people, but particularly young people, care about creating a better world not just for themselves, but for everyone,” he said. “Civil engineering has always had the safety focus, but it’s becoming more focused on protecting the environment as we build our roads and bridges and systems, and also doing it in a way that considers opportunity and economic and health equity.”

The combination of a technical education and a collaborative learning environment is at the heart of the civil engineering program’s design. “The value of a formal education is teaching students how to learn,” Arnold said. “That’s what I learned in my college career. I was learning technical skills, but more than that, I was realizing, ‘Oh, I can learn how to do these technical things.”

As the program begins recruiting students and the instructors build curriculum, there is already talk of the future. Program chair Hadnagy would like to see a graduate degree program in civil engineering. “A lot of our ideas really seem like they’re going to be able to happen,” said Arnold. “We want our students to get excited about civil engineering by seeing civil engineering at work in and around the city and the campus. I feel really lucky to be here — I’m getting the opportunity to build the program that I would have wanted to attend if it had existed when I was in high school heading to college.”