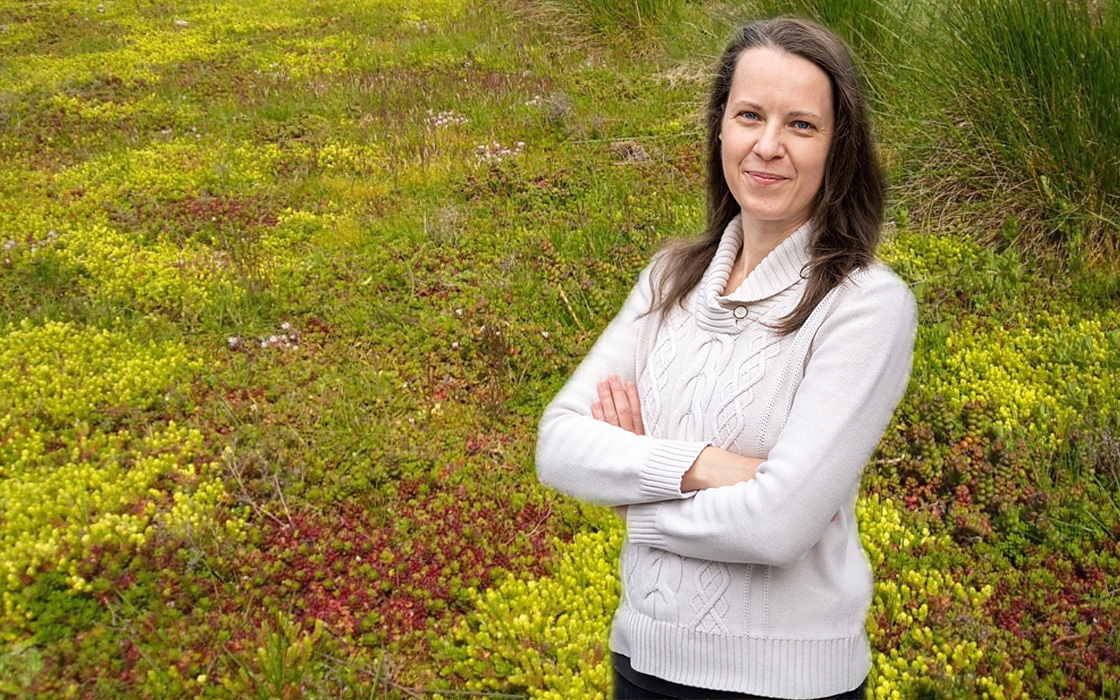 Creating a Community of Fixers

(Image above: Dr. Emese Hadnagy superimposed against the green roof atop the Center for Urban Waters.)

The road ahead is going to be bumpy. Climate change is here. In 2018, the Intergovernmental Panel on Climate Change (IPPC) warned that the world has about 10 years to alter its current trajectory. A steep drop in greenhouse gas emissions is needed to keep the planet from warming more than 1.5 degrees Celsius (2.7 degrees Fahrenheit).

This number is important. No matter what we do now, we can still expect to feel the impact of climate change (to some extent we already are). The effects will be different depending on where in the world you live. Here in the Pacific Northwest that likely means more frequent and intense wildfires, drought and heat waves. If the world runs past that that 1.5-degree mark then the scenario outlined above will be much worse. This is perhaps our last best chance at providing some kind of stability for future generations when it comes to climate.

The road ahead is cracked and full of potholes. It needs repair or, more likely, a complete redesign. This is where civil engineers come into the picture. Civil engineers design and create most of the built environment we utilize on a day-to-day basis. Think roads, bridges, canals, dams, airports, subway stations, high-rise buildings, etc. “In my opinion civil engineering is a service industry,” said UW Tacoma Civil Engineering Program Chair Dr. Emese Hadnagy. “It has a direct impact on a person’s quality of life.”

A world without civil engineers is one with cars but without anywhere to drive them that won’t tear up your vehicle. There may be water but no reliable way to get that water from its source to your home. “This is one of those disciplines where you notice the fancy buildings and the fancy infrastructure but there are invisible parts of civil engineering that you’d only notice if they weren’t there,” said Hadnagy.

Civil engineering is an in-demand field. The United States Bureau of Labor Statistics projects eight percent growth in the industry from now until 2030. The pay is good and the civil engineers of today will be helping address the problems of today and of tomorrow. “Scientists analyze the big picture,” said Hadnagy. “Engineers are tasked with mitigating issues. We are the fixers, essentially.”

The world needs fixers — lots of them, from a diverse range of backgrounds and lived experiences. This philosophy is at the heart of the new Civil Engineering program at UW Tacoma. “We want to create an open and welcoming environment because different viewpoints bring creativity,” said Hadnagy. “To come up with different solutions to all the complex problems we’re facing, we really need to bring people to the table and have them offer their opinions and contributions.”

Hadnagy knows what it’s like to be an outsider. She’s Hungarian but was born in the former Socialist Federal Republic of Yugoslavia. Six republics — Bosnia and Herzegovina, Croatia, Montenegro, Macedonia, Serbia and Slovenia made up Yugoslavia. The larger nation contained a mix of ethnic and religious identities. The combination of nationalism and identity came to the forefront in the early 1990s during a series of conflicts that have come to be known as the Yugoslav Wars.

The individual countries that comprised Yugoslavia started to leave the federation in 1991. An estimated 130,000 to 140,000 people were killed during the years of fighting. The Bosnian genocide in Bosnia and Herzegovina that killed more 8,000 Bosnian Muslim men and children took place during this time.

Hadnagy escaped the violence. “We left the country two years before the war broke out, thanks to my parent’s foresight,” she said.

Hadnagy has mixed feelings about her early life in Yugoslavia. “I had wonderful parents and friends, plus we lived in a supportive community,” she said. Even so, Hadnagy remembers feeling like an outcast, especially as she got older. “Hungarian and Serbian children were taught in separate classrooms because Hungarian children were looked down upon and thought to be not as smart,” she said.

The experience is years removed but the legacy of this time still lives in Hadnagy in at least one key way. “I experienced injustice and understand how important it is to be respectful, not just to people but also to the environment,” she said.

Hadnagy moved to Budapest before settling in a small Hungarian town where she attended both middle and high school. “I have fond memories of that place,” she said. “I remember playing outside and feeling a sense of freedom.”

The Socialist Federal Republic of Yugoslavia, where Dr. Emese Hadnagy was born, went through a complicated break-up between 1989 and 1992. Original map by Hoshie; derivative by DIREKTOR - Made by DIREKTOR, CC BY-SA 3.0.

Regardless of the circumstance, school remained a constant in Hadnagy’s life. “I was always encouraged to pursue my education,” she said. Hadnagy’s interest in civil engineering started before she knew of the profession. “I didn’t play with dolls,” she said. “I would build with LEGOs and I would almost always build buildings.”

This curiosity morphed into a desire to pursue architecture as a career. Along the way, she “stumbled upon” civil engineering. Hadnagy did her undergraduate work at a technical university in Hungary that had a direct exchange program with the University of New Hampshire (UNH). “My advisor recommended I participate in the program,” she said.  “I never had any intention of living anywhere else except my home country which I considered to be Hungary.”

Hadnagy attended UNH. She says the experience opened her eyes to the sheer volume of opportunities in the United States, especially around environmental research. Hadnagy returned to Hungary to complete a master’s degree before coming back to UNH to pursue a Ph.D. in civil engineering.

Hadnagy completed her Ph.D. then took a position with an environmental consulting firm. A year later she transitioned into her role as a Postdoctoral Research and Teaching Associate at the University of New Hampshire where she remained for a few years before taking a tenure track assistant professor position at the University of New Haven. Hadnagy stayed at New Haven for seven years and was promoted to associate professor. She also served as director of the online master of science in environmental engineering program.

Large-scale projects are complex and present challenges that are equal to the size and scope of what is being built. There’s a lot to consider when constructing a road, a bridge or a new program. In the first two scenarios it’s typical to have more than one civil engineer involved. In this case, it’s also true of the effort to build a civil engineering program on campus.

Hadnagy is the chair, but she sees her role as one of collaboration. “The faculty we’ve hired are leaders in their fields and I’m really excited to see what we can come up with together,” she said. Indeed, this spirit of working together is one of the reasons Hadnagy decided to come to campus.  “I was really attracted by the high engagement of the community and of industry,” she said.

Hadnagy wants to leverage that interest to develop strong relationships with the goal of helping students succeed. “We want to get our students connected to leaders in our area in a meaningful way before they graduate,” she said. “I also see this as a way for us to work together with industry on the problems that matter to the community.”

Students in the civil engineering program will get the chance to learn both on and off campus. Experts will be culled from the community but also from faculty, including Hadnagy whose research area is environmental engineering.  “My primary focus is dealing with contaminants and toxic chemicals that get into the water and the soil,” she said. “A big part of my work centers on testing new technologies or modifying existing technologies that are used to help mitigate contamination.”

The program officially launches in the fall of 2022. Before then, Hadnagy and her team will finalize the curriculum and begin the process of admitting students. Those students will get an opportunity to study and learn in Milgard Hall. The new building is slated for completion in January of 2023. Included in the building’s features: state-of-the-art engineering labs.

The ground has been prepared. Now comes the hard part. In the short-term Hadnagy is focused on getting the program going. Once that’s achieved she’ll turn her attention to creating internship opportunities for students as well as building up the research infrastructure. In the long-term, Hadnagy would like to see a graduate degree in civil engineering at UW Tacoma. “We really want to expand opportunities and access to students in this area to a highly sought after and very rewarding career that they don’t currently have,” she said.

Maybe the road ahead isn’t so bumpy after all.