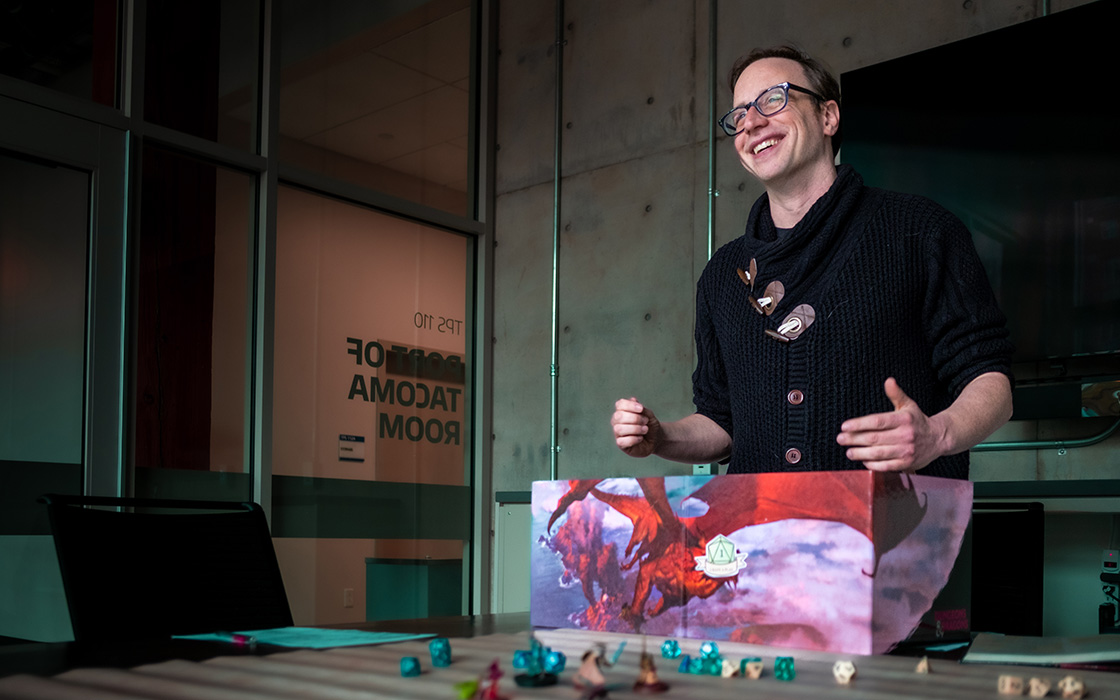 Peter Jung is on a quest. His journey has taken him to faraway lands, places of wonder and mystery. Jung has crossed mountains and forded rivers. Along the way he’s encountered goblins, wizards, ogres and dragons. Over the years, Jung has faced his fair share of setback and catastrophe. Yet, he perseveres. Turning back is not an option.

The stakes are too high.

“Tabletop gaming is actually the reason, I always tell people, is the reason I’m still alive,” said Jung of his passion for games, in particular Dungeons & Dragons. “I tried for years and years and years to fit in. It was awful. In school I was always alone, always kind of shunned and bullied and that left me feeling horribly depressed."

Jung and his family moved to Tacoma from University Place when he was five. He spent the majority of his formative years growing up in the city’s north end. “I’ve played video games for as long as I can remember but didn’t start playing tabletop games until I was in middle school,” he said.

Dungeons & Dragons (D&D) is a fantasy role-playing game. First released back in 1974, the game allows players to create their own characters. One player is chosen to be the Dungeon Master. The Dungeon Master or DM, serves as the game’s referee and storyteller. The game is meant to be collaborative and there is no real winner or loser. D&D is meant to inspire the imagination and build community.

“I met a group of tabletop gamers in middle school who were into Dungeons & Dragons,” said Jung. “I started hanging out with them and being one of the ‘weird kids.’ I was no longer alone and it turns out the ‘weird’ kids were some of the most loyal and amazing people. They’re still my friends. I’m 37 and still hang out with those people.”

Jung did Running Start while a student at Foss High School. Following graduation, he transferred to UW Seattle. “I started out as pre-med then realized I didn’t want to deal with blood so I switched over to computer science which was a pretty good fit except I couldn’t program,” he said. “I hit a barrier in terms of what I was going to do but then realized I’d been taking all these electives in psychology.”

Jung decided to major in psychology. “I did the math and realized I could finish my degree sooner if I attended UW Tacoma, so that’s what I did,” he said. Jung transferred to UW Tacoma in 2004 and graduated two years later.

The then-twenty-something took a position as a case aid with Catholic Community Services. “I worked with foster kids who had some educational challenges and found that I really enjoyed tutoring them,” said Jung. “I had sort of an ‘aha’ moment and decided I should be a teacher.”

Jung returned to UW Tacoma to pursue a master of education degree. “I worked with Dr. Matthew Weinstein and he was fantastic,” he said. Jung enjoyed the program but ran into difficulty. “Student teaching was really, really rough,” he said. “There were some deaths in my family around that time. I wasn’t sleeping very much and it didn’t go well.”

There are moments in every quest where the protagonist is challenged. The hero has options. They can turn back, press ahead or take another path. Jung chose the latter. “I pivoted to curriculum design,” he said. “I was especially interested in e-learning curriculum design.”

Jung completed his degree in 2012. Afterwards he landed a position with a tech startup. “I provided support for this app that had more than two million users,” he said. “It’s interesting, because I found that I took a lot of the soft skills I acquired through my different majors and applied it to this role.”

A company eventually bought out the startup and ended up shutting down the app. Jung was transferred to another unit. “The pay was good but it wasn’t what I wanted to do,” he said.

Around the time Jung began work at the startup he also happened to meet a psychologist. “He was running Dungeons & Dragon groups with these kids who had been diagnosed with autism,” said Jung. “The game is a good way to build social skills because there is a lot of role playing, a lot of creative make believe but within a fixed set of rules.”

The psychologist hired Jung to help co-run the groups. That was eight years ago. Jung still helps facilitate the D&D sessions. He no longer works for the company that bought out the startup. Jung is now an information and resource coordinator with The Arc of King County, a nonprofit that serves people with intellectual and development disabilities.

The career change is, in part, because of Dungeons & Dragons. “I found that I was working really well with my autistic clients,” said Jung. “I could communicate with them really well and could understand what they were experiencing. At one point I was talking with a friend of mine and he said, ‘Peter, you should go get an assessment — I think you’re neurodivergent.’”

Jung had been diagnosed with Attention Deficit Hyperactivity Disorder (ADHD) as a child. “I never really felt like that was the right diagnosis,” he said. Jung did as his friend suggested and went in for an assessment. “It was a big surprise to learn I am autistic, but the diagnosis gave me momentum to focus on advocacy,” he said.

Jung left his tech job and threw himself into the world of applied gaming. “I am working on creating a space where neurodivergent and autistic kids can focus on building friendships in a way that celebrates their neurodiversity and allows them to be comfortable being autistic around each other,” he said. “If you look at the suicidality rates of autistics, they’re so much higher than neurotypicals and I think one of the most powerful protective factors against that is having community.”

Word has gotten out about Jung’s work. He is regularly invited to present at conferences that focus on education and mental health. Jung’s quest now is to slay a very specific dragon. “I really want to change the narratives around autism, specifically how we think autistic people should communicate and exist in the world and about the importance of gaming and how to utilize that to deliver services to autistics in a less traumatic fashion,” he said.

Connecting with neurodiverse individuals through table-top gaming is a great example of the innovative programming needed in the South Sound to support adults diagnosed with autism spectrum disorder (ASD) and other developmental disabilities.

The Simon Family Endowment at UW Tacoma aims to cultivate and train social workers who focus specifically on serving neurodiverse adults, and on building an expanded network of agencies and services to support these adults. The Simon Endowment also supports scholarships for students who are neurodiverse and pursuing a variety of degrees, from computer science to biomedical sciences and beyond.