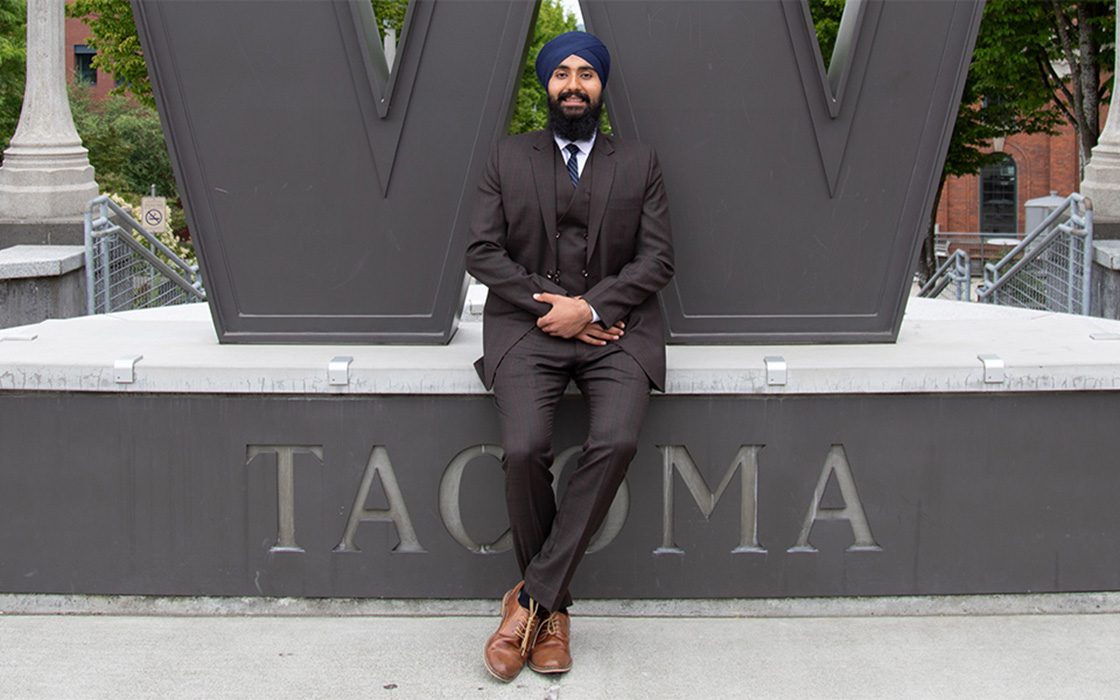 Gurchetan Singh and the American Dream

From India to Highline to UW Tacoma, with stops in Bakersfield and Bellingham along the way, Computer Science & Systems alumnus Gurchetan Singh knows the American Dream is alive and well.

In November of 2012, Gurchetan Singh, then 17, arrived in Bakersfield, Calif. from the Punjabi town of Lohian Khas, in northwest India. He was under pressure to graduate from Golden Valley High School before he turned 18, and that meant he had to master English, take courses in U.S. history and American government and pass the standardized exit examination then required in California to earn a high school diploma. It was a lot to accomplish in only a few months.

He could not foresee that in April of 2019, he would be seated next to Ana Mari Cauce, president of the UW, at the university’s annual Boeing breakfast, and that he would be one of three Boeing scholarship students invited to speak. The view that morning? Sun over Lake Washington. The audience? Boeing executives, UW professors, deans, UW Advancement staff and other scholarship students from across the university. Singh and the other speakers didn’t get graded for their remarks, but they did get an assessment — directly from President Cauce, who tweeted that the three student speakers were sensational.

Then this morning was our annual @Boeing breakfast where we celebrate our century-long partnership that has added so much to the economic vitality of our region and to our strong civically minded culture. The three student speakers were sensational. pic.twitter.com/E3KJpOl0B0

During his challenging senior year of high school, back in 2012, Singh could not foresee that his path to a university degree (a spring 2019 bachelor of science in Computer Science & Systems from UW Tacoma’s School of Engineering and Technology) would take him from Bakersfield to Bellingham and ultimately to Auburn.

During his years in Punjab, the Sikh-majority state bordering Pakistan, he had attended public school through third grade, private school after that. “It wasn’t much better,” he explained, “but it was more expensive.” Though his family had chosen to have him educated in English, that meant only that his textbooks at the secondary school were in English. Classroom instruction was still in Punjabi. The result? Though he learned to read and write English, he was not conversationally fluent when he came to the United States. Of course, that impaired his ability to converse with new friends and hurt his competitiveness for jobs.

Singh’s education in India was shaped primarily by his grandfather, someone he describes as saintly, and by two math-and-science teachers, each of whom brought a different approach to his pedagogy. Parminder Singh (no relation), who taught eighth grade, asked his students on the first day, “What do you want to become when you grow up?”

Like so many young people around the world, Singh wanted to play professional sports. His aspiration was to play cricket, the most popular sport in India. “I wanted to be a batsman.

“Mr. Singh explained to me how much coaching and financial investment it would take to achieve that goal — India has very few league teams and a population of more than 1 billion. He himself had been a great batsman and was unable to reach professional status. He made me see my odds of success were not good. He didn’t want to discourage me; he was being practical. But he shattered my dream.

“That conversation changed the game for me. Before, my focus was on sports and cricket. Afterward, I became more interested in reading and writing.”

In contrast to the friendly Parminder Singh, whose students admired him and found him charming, B.D. Gautam, who taught ninth- and tenth-graders, commanded a different type of respect and demanded discipline. Singh says he was a man of courage, brave enough to criticize the private school’s leadership, which Singh compares to corporate managers or owners more interested in the bottom line than in the educational progress of students. “He would stay late to meet with students who needed extra help, even though he had to travel far to get home.”

But the challenges of succeeding in America involved much more than just getting through school.

“When you move from India to the United States, you think anyplace you live will be like Los Angeles or New York City,” Singh says. But his family learned that employment opportunities and transportation options were not equal in every American community and that just because transportation to his American high school had been easy didn’t mean transportation to community college would be. Just getting registered for Bakersfield Community College was a nightmare, and when a family friend in Bellingham encouraged the family to join him, Singh’s father and sister visited the Northwest. It was the month of May. The climate was mild. The mountains and the Sound were beautiful. Flowering trees and shrubs were in full bloom. “My sister said it was like heaven.”

Optimistic about their opportunities in the Northwest and pessimistic about Bakersfield, Singh’s family decided he and his sister would move with their mother to Bellingham. His father wasn’t yet ready to leave his job in California. Singh enrolled in Whatcom Community College.

“Living in Bellingham, UW Seattle was in the air,” Singh said. “I learned the high-achieving students went to UW.” But Singh did not complete his AA there. Whatcom County had once had a strong manufacturing and natural resource economy, as well as significant tourism based on travel to and from Canada. But Georgia-Pacific had closed its pulp-and-paper operations there, an aluminum plant had reduced operations, tourism after 9/11 had fallen and the number of commercial fishing vessels had plummeted. His parents had not been able to find jobs, and the family needed his income. By now his English was better, so he found two jobs and worked seven days a week, carving out time to take an online math course.

The Singh family decided that for them, Bellingham was not the best place to be, and ultimately they moved to the Kent/Auburn area. Singh enrolled at Highline College. “I didn’t know you could go straight to the university. People would tell me to just apply to the UW. But I didn’t know how. I had no idea what the personal statement (a required part of the admissions application) was. If I had tried to write one at that point, I would have made the formal, mechanical version I learned in India.”

Higher education in India consists of two years of junior college and three years of university, so Singh hadn’t understood that in the United States he could have applied directly to a four-year university from high school. He thought he had to go to community college and then transfer.

Enrolling at Highline brought him into the English classroom of faculty member Lisa Bernhagen. “What she taught me is priceless,” Singh says. Bernhagen taught him how to use transitions in his writing, how to take advantage of resources like the campus writing center and that his writing needed to be more like his talking. She also encouraged him to attend Highline’s annual three-day Black and Brown Summit serving young men of color, which he found a powerful experience.

Getting involved with campus resources as a student-client opened the doors for him to become a student employee at Highline. “I got a job as a web developer on campus and was a tutor for statistics and economics. I realized that I love teaching. I never knew I would think of teaching. I didn’t know how good it feels when a student is struggling and you help them solve their problem.”

Highline’s president ultimately nominated Singh for a Next Step scholarship to UW Tacoma and, along with students from six other community colleges, he was awarded the prestigious two-year scholarship for top transfer students. (The Next Step endowment was established just after the permanent campus opened by a group of 30 donors in the community who each pledged $50,000 to create a fund large enough to provide awards of significant value to students.)

Singh’s first quarter at UW Tacoma was unexpectedly difficult, especially his programming practicum and discrete mathematics courses. He says he thinks the difficulty of these courses, as the gateway into the rigorous Computer Science & Systems major, is by design. He had a rough time, suffered dry eye from too much time in the lab, stopped hanging out with friends, felt discouraged when he saw the grade point average of which he was so proud starting to fall. But his family encouraged him, he took advantage of tutoring support and then decided to take a rest from programming, switching up the balance of his courses, taking one computer science course and two economics classes for a couple of quarters. Outside of class he attended some HuSCII Coding Club and Women in Computing Science events and got involved with First Gen Fellows, a student initiative providing workshops that focus first on helping students navigate the university and then empowering them for leadership.

Singh says the School of Engineering and Technology provided him countless opportunities to challenge himself and grow as a skilled citizen.

“What I would say to incoming transfer students in the Computer Science & Systems program is, ‘You will be afraid of failing, but don’t give up on the CSS major. Many students retake these classes, and you can still succeed.’”

Singh has made the Dean’s List twice at UW Tacoma and in 2017 had an internship with inTech Consulting in Kent. “My manager would tell me what I needed to learn, that I needed to meet clients and learn their requirements — for a web app or software. I felt like I had someone to guide me.”

Though many UW Tacoma faculty members contributed to Singh’s education, he says Associate Professor Anderson Nascimento affected him most. “During my network security class with him, I came to understand the importance of research and security for computer systems. He inspired me every day with his passionate stories of developing security solutions. He ignited my love for academia, and as a result of his inspiration I am hoping to one day do research on the security of cryptocurrency wallets.”

As a practicing Sikh who wears the traditional turban, or dastaar, Singh is used to standing out wherever he goes. But he wishes the typical American knew a little more about Sikhism, a monotheistic faith that, like Hinduism and Buddhism, is classified as a Dharmic religion because it originated on the Indian subcontinent. Judaism, Christianity and Islam are classified as Abrahamic religions. The vast majority of Sikhism’s roughly 27 million adherents live in Punjab, with more than 500,000 living in the United States and a similar number in Canada.

Through his time at UW Tacoma, Singh has maintained an entrepreneurial attitude and an interest in business — he intends to pursue an MBA eventually. Armed with a résumé reflecting multiple competitive scholarships, a rich array of extracurricular activities, service to others and a demonstrated record of intellectual tenacity, Singh has landed an internship working as a software engineer for T-Mobile. He hopes the short-term opportunity will lead to a permanent position.

As Singh told his audience at the Boeing breakfast, the American Dream is alive and well.