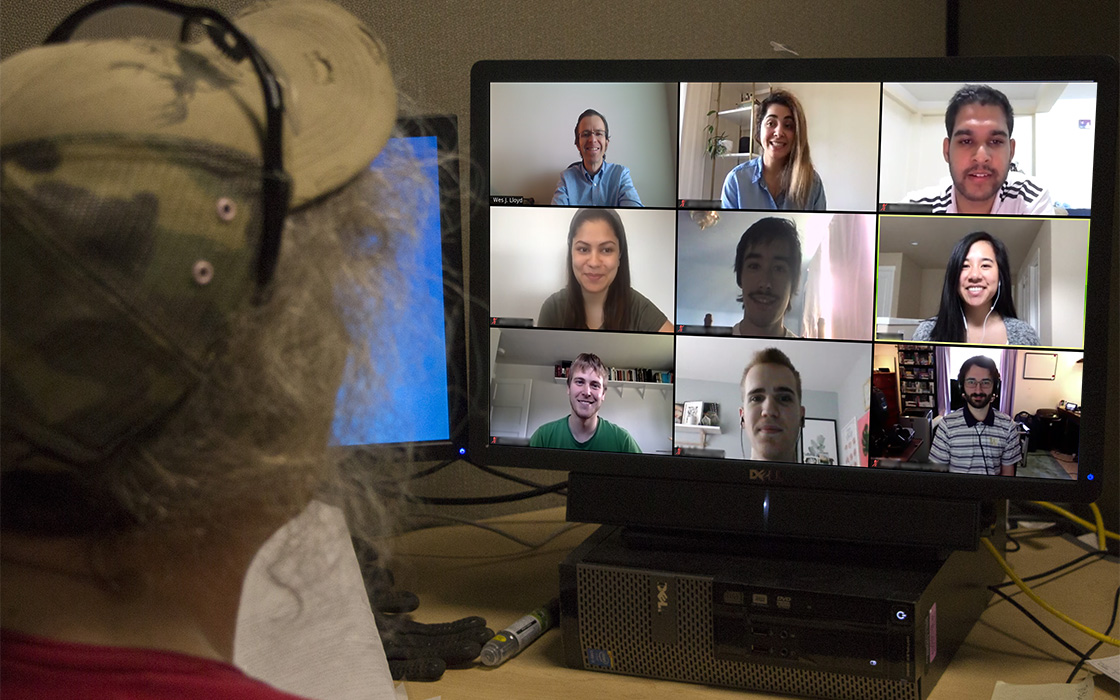 A new research Ph.D. at UW Tacoma is a major milestone for campus, the community, and the donors that are helping make it possible.

Audacious. A defining moment. A dream. A true polytechnic.

All have been used to describe the creation of the Institute of Technology and its two-decade evolution into the School of Engineering & Technology that recently achieved two milestones: launching the first research-based Ph.D. at UW Tacoma and receiving a gift of nearly $1.2 million to support the Ph.D. and other graduate programs.

The donation from former Chancellor Vicky Carwein and her husband, Bill Andrews, an engineer by training, brings the school’s story somewhat full circle, as both had key roles in establishing it.

“The proudest accomplishment of my career has been the honor of working at UW Tacoma and being on the ground floor for what they have today,” said Carwein, noting extensive contributions then and since by faculty, staff, community leaders and the area’s political delegation. “To think the Institute of Technology is now a full-fledged school of engineering. The work that has been done is outstanding, and it all happened in such a short period of time. We are just so proud of that and want to support it.”

Raj Katti, dean of the school since 2017, set a goal upon his arrival on campus. “When I got here, I said, ‘Let's establish a true polytechnic, as it was originally intended by the governor and by the chancellor when it was founded, Vicky Carwein,’” said Katti.

Katti and the school have been making good on that goal, adding programs in electrical engineering in 2017, mechanical engineering this autumn and civil engineering next year. With each degree, the SET made its case with UW administration and the Board of Regents. The school has hired faculty for the engineering programs and is building and borrowing laboratory space until gaining space in soon-to-be constructed Milgard Hall. “A lot of things had to align for this to materialize,” Katti said.

The school has come a long way from the Institute of Technology’s start with a single undergraduate degree in computing & software systems. Its new engineering degrees join undergraduate and graduate programs in applied computing, computer engineering and systems, information technology, and cybersecurity and leadership. Fittingly, the institute became the School of Engineering & Technology in 2018, and now has about 840 students.

Like the school’s other programs, the new Ph.D. program in computer science and systems addresses educational and market needs: too many jobs for those with doctorates, too few slots to earn them. In recent years, for example, only 1 in 25 applicants were accepted into the Ph.D. program at the UW in Seattle. That leaves out many South Sound candidates, even if they could make the drive north. Washington State University, the other in-state option, is in distant Pullman.

“Our state is 49th in the nation in the number of graduates in engineering compared to the number of jobs that are available in the state,” Katti said. “This is really needed.”

The birth of an ‘audacious vision”

The push for an Institute of Technology began in the late 1990s.

Andrew Fry, who has been with the school from the start, was on the board of the Washington Software Association, and serving on U.S. Rep. Adam Smith’s education advisory board and Gov. Gary Locke’s internet board. “We were all talking about how to create more engineering degrees because the dot-com boom was crushing everyone. We just couldn’t find anyone to do the work.”

An engineer at Pacific Northwest National Laboratory with economic development experience, Bill Andrews helped write a paper on the future of technology in Tacoma. The timing was good, as Locke had expressed interest in having another engineering school in the state.  UW Tacoma was new and community leaders, including Columbia Bank founder Bill Philip, backed the idea. “Tacoma’s political leadership was very strong,” Andrews said. “It seemed obvious we ought to do something in Tacoma.”

With its case made and strong backing, “the Institute got going and at least some startup funding within a couple of months,” Andrews said.

A cause they could get behind

For Carwein, chancellor from 1995 to 2004, UW Tacoma was a favorite stop during her career because the university was a “blank page” with a “fire in the belly to do great things,” welcoming of “crazy, out-there ideas.”

“We were bringing on new programs every year or two,” Carwein said, and the Institute of Technology was one of them.

Carwein and Andrews are retired and living in Knoxville, Tenn., near their children, and traveling every chance they can. For this article, they spoke while driving south in Nebraska, having knocked state No. 49, North Dakota, off Vicky’s list and moving toward No. 50, Arkansas.

Last year the couple ventured to Tacoma for the 20th anniversary of the South Sound Technology Conference, which Andrews had helped launch. “When they told me they were about to get approval for the Ph.D. program, I said, ‘No, I don’t believe it.’ We had talked about it when we started the Institute, but it was just a dream,” Carwein said. “They’ve got a great dean in Raj, and he’s brought on so many programs.”

From what they saw and heard during their visit, “we were just so impressed and said, ‘we'd like to be involved in that,’” she said. They knew Ph.D. programs aren’t easy to get off the ground and decided to direct their philanthropy there.

Their donation is officially the Vicky L. Carwein and William B. Andrews Endowment for Graduate Programs, School of Engineering and Technology. It includes $100,000 in immediately available funds and an additional $1,165,000 over 12 years, with 70% going to the Carwein-Andrews Distinguished Fellows Program, 15% to foster research collaborations with Ph.D. students, and 15% to an existing scholarship fund bearing their names.

“The Ph.D. program is a major milestone in this audacious vision that Vicky and Bill and the community shared,” said Fry, a teaching professor and the SET’s director of community partnership who’s overseen the South Sound Technology Conference for years.

“Until you get that Ph.D. level of research in, it’s hard to look at yourself as a level one research university and school. That Ph.D. program was the bow on top of the present. It signifies the evolution into a true research school,” Fry said. “One thing that makes Vicky and Bill’s gift so heart-warming is that they were there at the beginning of the journey.”

What the Ph.D. program entails

In the Ph.D. program, students collaborate with a faculty adviser on research projects and can serve as teaching assistants and work with graduate and undergraduates as well.

Nine Ph.D. students are currently in the program, all of them UW Tacoma master’s graduates. An additional six – and likely more – will join them in the autumn. Mohamed Ali, professor of computer systems and graduate program coordinator, said research will likely concentrate on machine learning, data science, cybersecurity and bioinformatics – all areas of specialization for SET faculty.

“The adviser, the one who has the big picture of a project, assigns a piece for the student to tackle, and then combines the research of all the students together,” Ali said. “We in Tacoma are interested in applied research that can feed back into industry and the community. It will help our community and help our students find good careers once they graduate."

Varik Hoang, '18, '20,  is one of the first Ph.D. students, working on research in cloud and distributed computing with Assistant Professor Wes Lloyd. Hoang had been educated and worked in his native Vietnam and immigrated to the U.S. with his family in 2010. Initially he had planned to just earn his bachelor’s in computer science but stayed to get his master’s degree. With references from UW Tacoma faculty, he’s started teaching an introductory computer science course at North Seattle College.

At UW Tacoma, Hoang mentors students new to computer science. “The key is to be patient and make them feel that they can belong,” he said. Having the Ph.D. program in Tacoma allows him to stay close to family and do the research he’s come to love because of its pursuit of “something new, something novel and the opportunity to go deeper.”

Many established Ph.D. programs offer students full funding for their advanced education, often a combination drawn from endowments, research grants and teaching assistant salaries. In some cases, an employer or government entity covers the cost. So financial support can be a recruiting tool, and the lack of it a barrier for some students. SET accepted more students than it could provide full offers, so support like the Carwein-Andrews endowment and partnerships with companies and other organizations will help going forward.

Symbiotic relationship between research and community

Katti emphasizes the symbiotic relationship between research and the community, as well as the ability to foster jobs and opportunity. He mentions Infoblox, Microsoft, the U.S. Navy, Tacoma Public Utilities and other partners.

“If you look at what is happening in Seattle, a Ph.D. student does some research and the research is so good that the faculty adviser thinks they should start a company. And then Ph.D. students, maybe a couple of master’s students and a Ph.D. adviser, start this company,” Katti said. “These are extremely high-tech, cutting-edge companies. And that's likely to happen here. Once we have enough Ph.D. students and enough research coming out, more and more faculty and Ph.D. students will start companies.”

“A Ph. D. program acts as a think tank for tech companies, and tech companies will move into the area. And because of that, they can give us research problems, and we can solve them,” Katti said. “Startups begin to thrive in regions where schools have a Ph.D. in computer science and engineering. I think this Ph.D. program is going to facilitate that.”

Katti said county and city government have been valuable supporters of the Ph.D. program and the school’s growth in general.

“This new Ph.D. program promises to build on the profound success of the University of Washington Tacoma’s School of Engineering & Technology, and we look forward to continuing to partner with this anchor institution on efforts to increase the number and diversity of living wage jobs in Tacoma,” said Tacoma Mayor Victoria Woodards.

The first in their families to graduate college, both Carwein and Andrews saw education transform their lives and the lives of many others, especially at UW Tacoma where many students come from diverse, financially challenging backgrounds.

“Because of our education we have been given and benefited from countless opportunities, experienced career success, made money, enjoyed upward mobility, and now find ourselves at this point in our lives able and desiring to give back,” they wrote in their official gift document.

They hope the commitment they’ve made resonates with others: “One of the things we hope is that this gift will bring  other people to the table to invest as well,” Carwein said.