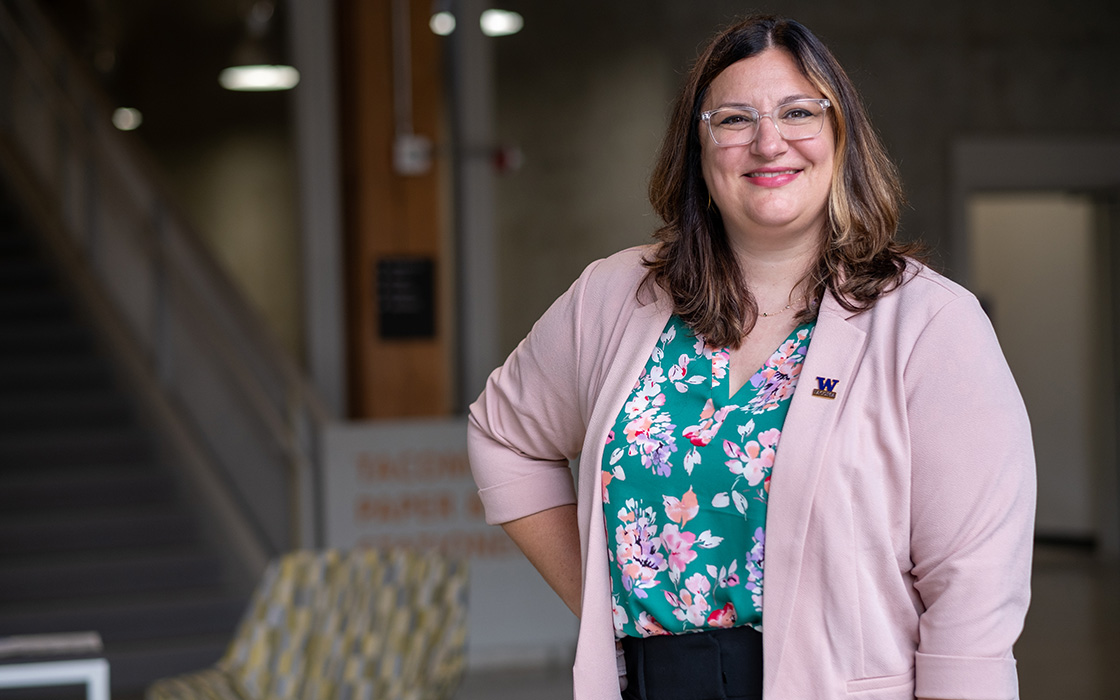 September 22, 2022
Natalie Eschenbaum's experience in higher education gave her the tools and insight needed to lead the School of Interdisciplinary Arts & Sciences as its new dean.

In some ways, Eschenbaum seems pre-destined for academia. Born in Cambridge, England, Eschenbaum grew up in the shadow of the famed University of Cambridge. “I lived under the umbrella of a university that’s seen by many as out of reach,” she said.

Both of Eschenbaum’s parents were the first in their families to earn college degrees and Eschenbaum’s father worked as a professor at Anglia Polytechnic University in Cambridge. “Education was always highly valued in our home because it transformed my parents’ lives and because their parents had sacrificed so much for them to go to school,” she said. “So, the conversation was always about where I was going to college, not if I was going to college.”

Eschenbaum and her family moved to Minnesota when she was in middle school. “My dad’s parents passed away and they left us some money which my parents used to send us to a college prep school in the Twin Cities,” she said. “It was a very intense academic experience.”

The experience may have been rigorous but it did ready Eschenbaum for life as a college student. Following graduation, she enrolled at Tulane University in New Orleans. “I applied to Tulane with the goal of becoming an architect,” she said. “Then I changed my mind and was going to be an engineer, then I changed my mind again and decided I wanted to be a lawyer.”

Eschenbaum chose law, partially because it would allow her to continue taking literature courses. “I went to talk to my advisor about law school and he just looked at me and said, “You’re not going to law school, you’re going to be an English professor,’” said Eschenbaum. “I didn’t believe him but he really encouraged me and, as it turns out, he was right.”

Eschenbaum graduated from Tulane in 1997 with a degree in English. She continued her education at Emory University in Atlanta. “The advisor I worked with at Tulane took a position at Emory, so I followed him there,” said Eschenbaum. “He introduced me to a book called ‘The Anatomy of Disgust’ by William Ian Miller.”

The book explores the power of disgust and its role in “creating and maintaining social hierarchy.” Eschenbaum took an interest in the subject. “I was fascinated by the idea that poems are not only meant to be delightful and beautiful; they can be ugly and gross as well,” she said.

Eschenbaum found herself attracted to the repellant — at least when it comes to literature, especially work by Shakespeare and seventeenth-century poets. “I became obsessed with this question of why people would write gross poems about foot sweat, pus, and these sorts of things, and, so, that’s where my research took me,” she said. “What I’ve learned is that we are mostly disgusted by things that we fear. The opposite of that is that things we love and desire can help us overcome disgust.”

While a doctoral student at Emory, Eschenbaum took a position with an associate dean. “I worked with her on planning an orientation program for new students,” she said. This role ultimately led Eschenbaum to an academic advising position at Emory. Eschenbaum did this for a few years before taking a similar role at the University of Minnesota. “That experience helped me see the complexity of what it takes to move students through a degree program,” she said. “It’s not just checking boxes, it requires a much more holistic approach.”

Eschenbaum worked as an advisor until 2008 when she became an assistant professor of English at the University of Wisconsin-La Crosse. Eschenbaum attained the rank of full professor in 2019. During her time at the university, she served as department chair for five years as well as chair of the faculty senate, a position she held for two years. “The experience in faculty senate showed me that, in order for a university to function in a healthy way, there have to be open conversations across faculty, staff, students and the administration,” she said. “When it comes to department chair, I learned that faculty members don’t work in a vacuum, that everything we do affects someone else and that we need to be mindful of the possible positive and negative outcomes.”

UW Tacoma’s School of Interdisciplinary Arts & Sciences is the largest academic unit on campus. SIAS is home to about 2,600 undergraduate majors and nearly 200 faculty. Last year, more than 4,000 UW Tacoma students from every undergraduate major the campus offers took a course in SIAS. The 2nd, 3rd and 7th largest majors on campus are offered by SIAS — psychology, biomedical sciences and communications.

“The first phase for me is truly a phase of listening and learning,” said Eschenbaum. “I need to get to know UW Tacoma and that means talking to students, faculty and staff.”

One thing Eschenbaum plans to address early on is morale. “There has just been a lot of stress over the last couple of years, and so much change,” she said.  “People are tired but I also think people are ready to come back and be in-person and sort of regrow a new version of what higher ed is today.”

UW Tacoma is currently working on a new strategic plan and Eschenbaum sees this as an opportunity for the School of Interdisciplinary Arts & Sciences to create one of its own. “It makes sense for SIAS to use the campus strategic plan as a blueprint,” she said. “We need to take that and create our own strategic plan which will mean working collaboratively across our different constituencies including students, faculty, staff, alumni and the community to set goals and to hold ourselves accountable.”

Eschenbaum sees the work ahead as student-centered. “I want to have a very close connection with our student government,” she said. “I’m also planning on developing a student advisory board that will meet regularly with me.”

Natalie Eschenbaum grew up near one of the oldest and most prestigious universities in the world. College has always been a part of her life. Her experience offers valuable perspective. While it may have been a foregone conclusion that she could attend college, Eschenbaum knows this isn’t the case for everyone. “How do you change the system while you’re in it?” she said. “That’s a challenge that I think all of us in higher education are facing, it’s hard work but it’s also necessary work.”