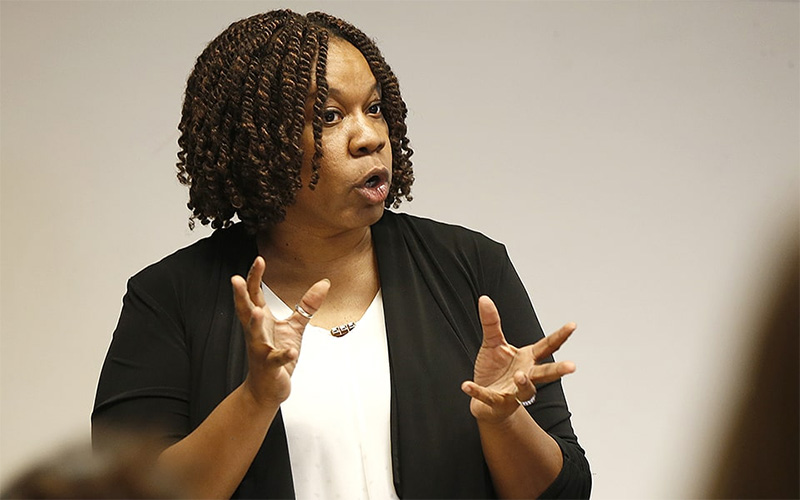 Four of Assistant Professor Sharon Laing's students were recognized this past spring at the University of Washington Undergraduate Research Symposium.

The classroom is more than just a physical location, it’s an idea. These past few months have shown that education can happen anywhere and at any time. UW Tacoma Assistant Professor Sharon Laing, in the School of Nursing & Healthcare Leadership, lived this philosophy long before the pandemic forced university coursework online. “I feel that as faculty, we can teach in the classroom, but I think we must go beyond the classroom to fully engage our students,” she said.

The role of assistant professor, like any of the instructional and research positions at a university, involves student mentoring. Laing takes this obligation very seriously. “I really strive for my students to think about the future beyond their baccalaureate degree,” she said. “I want them to think about how they’re using that degree, where they want to go and how they can make a difference in the various spaces that they will occupy in our healthcare infrastructure.”

What it means to be a mentor looks different depending on the situation. For Laing, it’s about being available and encouraging her students to participate in research. “The students that I’ve mentored are first generation, they’re students of color, they’re students who may not ever have an opportunity to really showcase the work they’re doing,” she said.

Laing has been making space for students since her professional teaching career started back in 2013. Her willingness to involve students has paid dividends. Four of Laing’s students were recently honored with different awards and scholarships at the University of Washington Undergraduate Research Symposium. As we will see, Laing’s emphasis on involvement provides students with both opportunity and accolades that will further their professional development.

Laing’s research interests are varied and include community-based health promotion, cancer prevention and control, patient-centered outcomes, health inequalities and disparities and mobile health promotion. In the summer of 2019, she reached out to students for help with two studies. The first included analyzing physical activity and healthy eating data among women in Grays Harbor County. The second involved looking at healthcare delivery for safety-net patients in Western Washington and Washington, D.C. who received services at community health centers.

Veronica Felstad is a student — sort of. Felstad is currently interning at UW Tacoma’s Counseling & Psychological Services. Her internship ends in August and with that Felstad will have completed her doctoral-level degree, a PsyD, in psychology from Antioch University Seattle.

Felstad first met Laing as an undergraduate. “She took me under her wing,” said Felstad. The two worked together on research projects with the goal of presenting at conferences. “We wrote an abstract for the National Conference of Undergraduate Research and it was accepted,” said Felstad. “My topic was cyber-bullying and how that impacts mobile health technology.”

Felstad completed her bachelor’s degree in 2015 and decided to keep going. “I found out about the program at Antioch,” she said. “She [Laing] helped me with that process and also wrote a letter of recommendation.” Felstad began work on the PsyD in 2016. The two lost touch in a haze of busy schedules but were reunited when Felstad started her internship on campus. “I saw Dr. Laing and I yelled across the parking lot,” said Felstad.

The two picked up where they left off. Laing attended Felstad’s PsyD defense. The relationship has evolved over time from one of student-teacher to professional-to-professional. Felstad will spend the next year doing postdoctoral work at Dayspring Behavioral Health. “I’ll be doing neuropsychological assessments with kids to help them get accommodations,” she said.

Peter Wangigi came to the United States from Kenya in 2011. The then-20 year-old lived in Boston for a while before moving to the Pacific Northwest. Wangigi completed his associate’s degree at Highline College, then enrolled at UW Tacoma to pursue a degree in healthcare leadership.

Wangigi’s choice of major stems from his interest in helping people back in Kenya. “My ultimate goal is to improve the healthcare system in Kenya whether that means going back there in the future or doing what I can from here,” he said. Wangigi is particularly interested in the potential of mobile health technologies to expand access to rural areas.

Wangigi’s long-term plans got a boost by working with Laing. Wangigi helped organize and interpret data for the bicoastal survey of safety-net patients in Western Washington and Washington, D.C. “I loved working with Dr. Laing,” he said. “She was so patient with us and would always take time to answer our questions.”

This experience provided Wangigi with something he could put on his resume, but that’s not all. Wangigi presented at the 62nd Annual American Congress of Healthcare Executives Meeting in Chicago. “I gained so much confidence going through that process,” he said. “I feel this confidence will help me later when I’m interviewing for jobs or pursuing my master’s degree.”

Laing’s mentoring helped Felstad find direction and provided Wangigi with real-life skills. These are no doubt important but can be hard to measure. If you’re looking for something concrete to measure her influence, then look to the Spring 2020 Undergraduate Student Research Symposium. Two of Laing’s students — Myai Nguyen and Anna Howard — received the Mary Gates Research Scholar award. Two more of her students — Lucas Bjorkheim and Yusra Iftakar — were honored with the Population Health Initiative Recognition award.

Nguyen and Bjorkheim assisted Laing in the study of physical activity and healthy eating habits of rural women in Grays Harbor County. “Working with Dr. Laing is by far one of the best experiences I’ve ever had,” said Bjorkheim. The UW Tacoma biomedical sciences student plans to be a neurosurgeon. “My grandfather had Parkinson’s and that’s what lead me to medicine,” he said.

Bjorkheim is currently completing an online internship with Lenox Hill Hospital in New York. The internship consists of daily lectures as well as watching surgeries online and talking with doctors via conference calls. Bjorkheim plans to continue working with Laing during his senior year. He graduates in June 2021 and hopes to begin medical school soon after.

Nguyen recently graduated with a degree in healthcare leadership. She has decided to take a gap year before pursuing a master’s in public health. “I think working with Dr. Laing has prepared me for graduate school,” said Nguyen. “I know I’m going to be analyzing data and working with different groups of people and this opportunity provided me with a chance to learn.”

Sharon Laing believes in her students and they believe in her. The students who presented at the UW Undergraduate Research Symposium nominated Laing for the Outstanding Undergraduate Research Mentor Award. She won. “I’m grateful to them [her students] for nominating me,” said Laing. “However, it was a strange feeling to be honored in this way because this is just what I do.”

Laing isn’t one for the spotlight nor does she believe in making it look like she is responsible for her student’s accomplishments. Indeed, Laing is grateful for the chance to conduct research with students. “Our students are willing to go above and beyond, and to take research to another level; it is enriching for faculty to be involved in the co-creation process, it truly renews you,” she said.