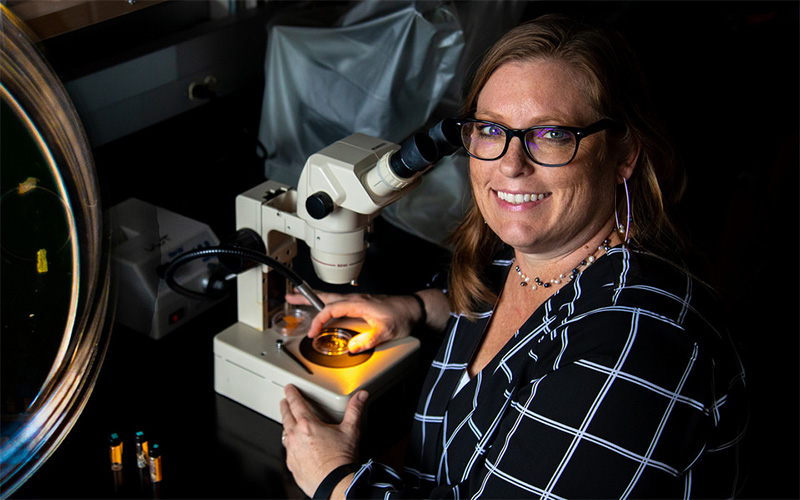 Senior Lecturer Julie Masura connects her love of teaching and her passions for geology and the health of Puget Sound.

Julie Masura is cool. She’s got a quick wit and self-deprecating sense of humor that makes her seem familiar even if you’ve just met. Masura knows how to fly and once helped her family rebuild an airplane, a 1952 Piper Tri Pacer, from scratch. Oh, and she played rugby for 13 years.

At a dinner party Masura could easily be the center of attention, but that’s not her style. “I love teaching and I love my students,” she said. “My successes in teaching and research are connected to the energy, motivation and dedication of students.”

Masura came to UW Tacoma in 2005 as a part-time lecturer. In the intervening 13 years she’s become something of an institution on campus. “I can honestly say that I’ve been on the hiring committee for a majority of our science faculty,” said Masura. “Bonnie Becker taught her teaching demo in my class, and now she’s one of our associate vice chancellors.”

Masura is a Tacoma native. She grew up not far from what is now UW Tacoma. Masura has long had a fascination with science. “I remember going to the Tacoma Public Library’s book sale when I was a kid,” she said. “I went straight to the science section. I grabbed all of these science books on how to do labs and backyard science experiments.”

Following graduation from Lincoln High School, Masura headed east to Washington State University where she pursued a degree in engineering. She’d just about finished her degree when she had a change of heart. “I remember one day just sitting in class thinking, ‘I hate this,’” said Masura. She switched her major to science education. A new major came with new graduation requirements. “I had to take a geology course,” said Masura. “We went on a class field trip to northeastern Washington and it blew my mind. I called my mom the next day and said, ‘Mom, I love geology.’”

Masura taught her first class while still an undergraduate at WSU. “I continued teaching all through graduate school,” she said. “Not only was I teaching labs, but I was actually taking on full courses, which was unusual.” Masura earned bachelor’s and master’s degrees in geology from WSU.

The interior of Masura’s office reflects her interests. There are shelves and shelves of rocks. One wall is partially decorated with blown-up photos from Masura’s thesis field work. “I went to Utah and helped dig up dinosaur bones,” she said. Farther back on the same wall is a collection of thank-you cards and letters from different people including students.

Masura has, in her words, many research agendas. She and Associate Professor Cheryl Greengrove study toxic algae in Puget Sound. “These algae cause shellfish to become contaminated, which can result in shellfish poisoning, “ said Masura. “The toxin is so potent that if you and I were to share a shellfish, your lips might tingle but my entire respiratory system could become paralyzed.”

Since 2010 Masura has also worked at UW Tacoma’s Center for Urban Waters as a research affiliate faculty. “[Center Director] Joel Baker asked if I could come up with methods to measure microplastic pollution in the ocean,” said Masura. The National Oceanic and Atmospheric Administration is a collaborator on this project.

The work has produced results. “Over the years we’ve created these methods for collection and processing that have been published in journals and utilized by different organizations around the world,” said Masura.

Masura is quick to point out that students played a major role in developing these new approaches. “Most, if not all of these ideas came from students,” she said. Indeed, students under Masura’s tutelage collect and analyze samples for signs of microplastics.

Masura’s campus lab is lined with microscopes, beakers and vials. Some of the vials contain samples from Puget Sound while others hold microplastics collected off the coasts of Greenland or Alaska. “The stuff [microplastics] is everywhere,” said Masura. “We find it in the lowest trophic levels of shellfish and plankton all the way up to large megafauna.”

One goal of Masura’s work is to use the data collected to estimate and track microplastic pollution in Puget Sound. It’s a big task, one Masura is ready to tackle — with a little help. “I have great students who are really committed to the task,” she said. “I’m excited to see what we’ll discover together.”