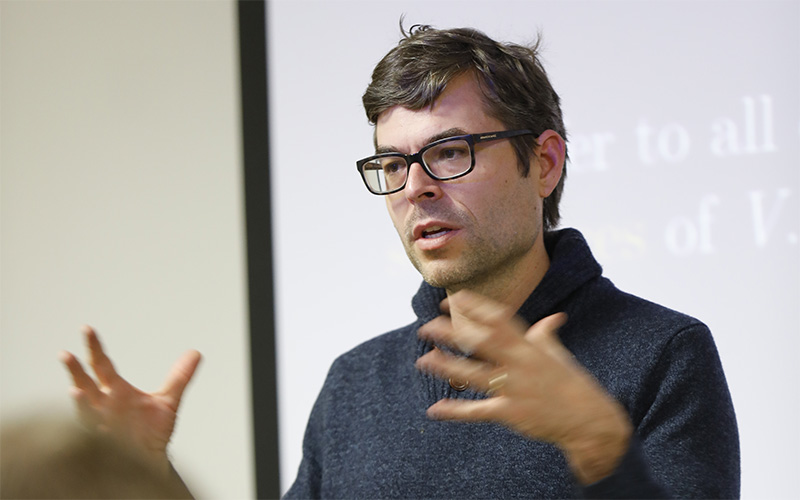 The National Science Foundation has awarded a $700,000 grant to Dr. Ander Erickson to study how college students use online resources in "gateway" mathematics courses.

The grant is part of NSF’s Faculty Early Career Development or CAREER program, which supports early-career faculty who have the potential to serve as academic role models in research and education. It is the first such NSF grant made to a UW Tacoma faculty member.

In the sense that Erickson will be studying, gateway refers to a lower level course a student must pass or do well in to continue on in their desired major. “We’re not talking about upper division courses that only math majors take, we’re talking about things like precalculus or statistics that almost any student going into a STEM major has to take,” said Erickson.

These types of courses are meant to gauge how well a student understands core concepts that are seen as fundamental to later success within a major. “Gateway courses can contribute to inequitable retention in STEM when first-generation students and students from minoritized backgrounds are not being adequately supported,” said Erickson. “This project isn’t about advocating for the removal of these requirements, but rather about helping students meet them.”

Erickson started his research into the area in 2019 after receiving a grant from the University of Washington Royalty Research Fund. “The idea stemmed from an observation that a lot of my students use online resources to help support the work they’re doing in the classroom,” he said.

As part of the early research, Erickson surveyed 230 students and conducted in-depth interviews with 48 of those 230 to see if, and how, they used online resources in their math class.  “I surveyed all over the country and found that, yes, a vast majority of students were using online resources,” he said. “Many of them talked about how this was something they were doing much more of in college than in high school. They just felt like they were kind of drowning and many of them said they felt that they wouldn’t get the grade the got in their classes, if not for these resources.”

The NSF grant will allow Erickson to talk to more students and gather more data about how they use these online resources. “What does it mean to use these resources effectively, because there’s certainly a spectrum, and some students told me they’re becoming too dependent on them,” he said.

Erickson’s overall goal is to develop ways for students to use these tools that foster skill-building and confidence. “If they depend on them [online resources] in unhealthy ways, they could be in big trouble down the road,” he said.

Erickson plans to develop classroom interventions and test them at different colleges and institutions across the country. “In particular, I’m looking for ones that have a lot of first-generation students and who have a diverse student body,” he said.

A key component of this project is improving access to STEM, especially among marginalized communities. “If we knew how to encourage and support students around how to use these resources, then we could get closer to a situation where they’re being used to help counter some of the inequities in our system,” he said.