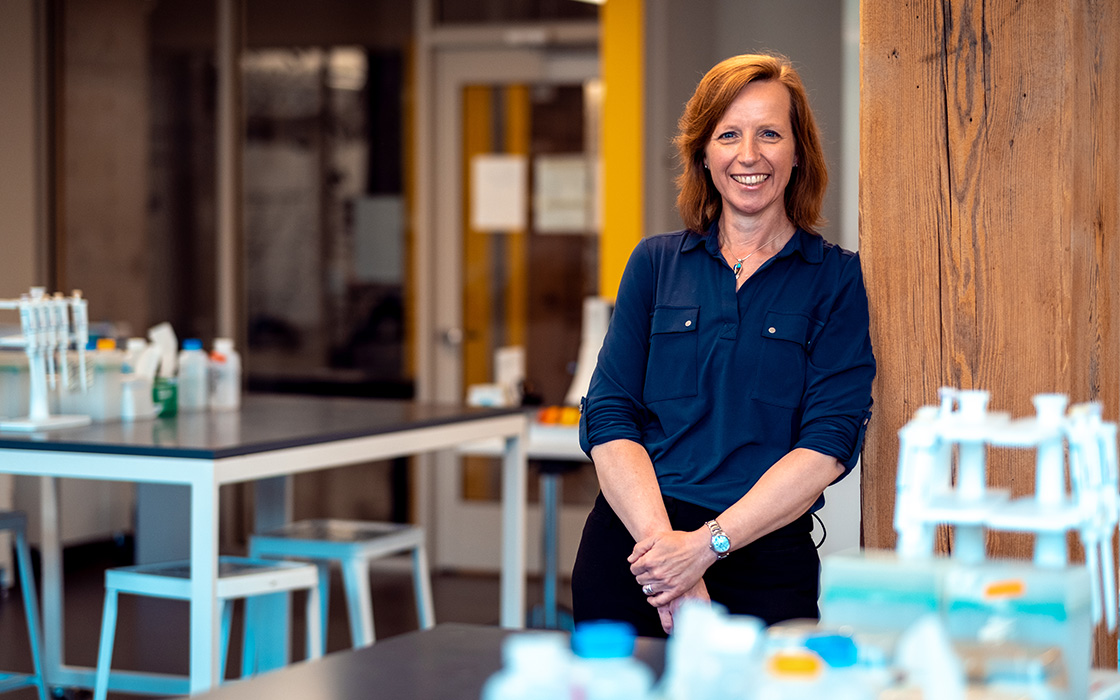 Associate Teaching Professor Jutta Heller stands at the front of the classroom. She welcomes her students, checks the roster to familiarize herself with the new names and faces. A new quarter has begun. Heller will get to the syllabus in a moment but first she does something a little scary. “I ask them to tell me about themselves and then I tell them about myself,” said Heller. “That’s a hard one.”

Heller goes beyond the first-day ice breakers, past cursory bits of information like favorite movie or place she’d like to visit, to the core of who she is as a person. “I tell them on day one, that I lost a parent, that I grew up internationally and didn’t speak English as a first language,” she said. “I tell them I struggled in college, that I didn’t fit in and that just because I have a doctorate and went to Princeton and Johns Hopkins, that doesn’t mean I don’t struggle with the same imposter syndrome feelings that they might be having.”

Born in what was then West Germany, Heller grew up in different parts of Europe. “My mother was a school teacher and my dad worked for IBM,” she said. The family moved from Germany to Italy and later to Switzerland. “My dad got a job in Switzerland with a new company that planned to send him to Santa Barbara,” said Heller.

In preparation for the move to the United States, Heller and her older brother were sent to an American school in Switzerland. “I learned English in second grade,” she said. “I went to some ESL classes for a few months and learned enough to be okay in the classroom.”

The move to Santa Barbara never happened. “My father was killed by a drunk driver when I was 10,” said Heller. “It changed our lives.” The family stayed in Switzerland. Heller’s mother continued teaching and got some financial assistance from a life insurance policy.

Heller is the youngest of three siblings. “My oldest brother is 14 years older than me,” she said. “We were never really close, but my second oldest brother and I shared many of the same experiences and are much closer." Time passed and Heller’s brother graduated from high school and went to college in the United States. “I thought, ‘Oh, this is cool, I want to do that too,’ ” she said.

The teenage Jutta Heller wanted to be a fighter pilot. “I’d watched 'Top Gun' and loved it,” she said. “That didn’t pan out, so I thought I would become a veterinarian because I love animals or maybe I would be a doctor, but then I realized that was too much responsibility. I didn’t want to deal with death on a regular basis.”

Heller’s future plans started to take shape in tenth grade. “I had this science teacher that I just loved,” she said. “It was then that I knew I wanted to do something 'sciency,' but what exactly that would be I didn’t know until I got to college.”

Heller followed her brother overseas, but, while he went to Columbia University, she attended Princeton. “I did well in high school. Even so, I thought someone in admissions had made a mistake,” said Heller. “I went from being a top student in high school to just run of the mill in college. I struggled academically at Princeton and didn’t know how to study or where to find guidance. I didn’t feel like I belonged.”

The thing is, Heller graduated with a degree in molecular biology. She made it through partially because she found a group of people on campus who had similar lived experiences. Heller also found a mentor. “I joined a lab with one of my professors,” she said. “She was a non-tenure track lecturer doing a bit of research on the side and she became almost like my second mom.”

Heller’s career started to come into focus but the image wouldn’t become clear until graduate school at the Johns Hopkins School of Medicine. “I love looking at things, and so when I had the opportunity in grad school to join a lab that was doing protein x-ray crystallography, which is a method to determine what the three-dimensional structure of a protein looks like, I was intrigued.”

“The big picture was never my thing. I want it small. I want to understand the small things — cells — and even smaller than that, the molecules within them.”

Heller completed her Ph.D. in biophysics. She did post-doctoral work at the University of Chicago before taking a lecturer position at Loyola University Chicago.

While in Chicago Heller met her future husband. “He grew up in Kent and wanted to find a way to be closer to his parents,” she said. In 2010 the couple decided to head West, spurred on by the promise of a free place to stay while they looked for jobs. “My husband’s family owns property on Gamble Bay,” she said. “We moved in there and I started applying for teaching jobs.”

Heller got hired part-time at Olympic College. A few months later she interviewed at UW Tacoma. “I got hired to teach one class in the winter of 2011,” she said. Heller primarily taught introductory biology classes during her first few years on campus. In 2014 Heller started working on a proposal that would eventually become one of UW Tacoma’s most popular majors — biomedical sciences. “I put together a proposal with help from folks like EC Cline,” said Heller. “Part of me did it for professional development, the idea that I’d get to help build a program, but I also saw an opportunity to help students pursue a course of study that they might not otherwise have the opportunity to do.”

The biomedical sciences major is a pathway to a number of different careers. “Students who go into this major are looking at working in a lab or going to medical, veterinary or pharmacy school afterwards,” said Heller.

At some point at the start of every quarter Heller tells students about herself. She also asks students about themselves, about why they’re here. “We get to chatting about their futures, about what they’re thinking about in terms of a career,” she said. “Given my life experience, I feel it’s important to pay it forward, to encourage my students to think about what’s best for them and do what feels right.”