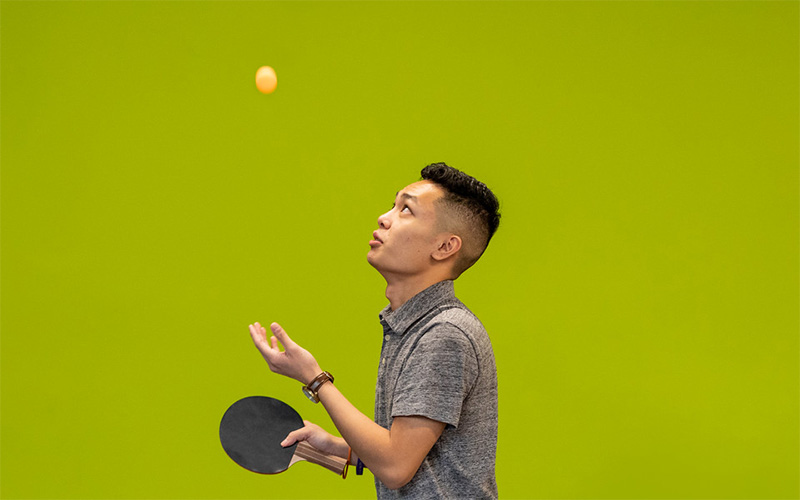 Service With a Smile

Update since we published this story in 2020: Vincent Da served a second term as ASUWT President. He also completed an internship with the Washington Department of Health, reviewing the impacts of proposed legislation on the healthcare professions. After graduation, he has accepted an offer to work for MultiCare's Center for Health Equity & Wellness.

Vincent Da is one of those smiling faces you’ve probably seen around campus. He can often be found playing ping-pong (aka table tennis; the terms are interchangeable) at the University Y, hanging out with friends at the Dawg Den, or representing the student body at a Chancellor’s Town Hall. He’s right at home at UW Tacoma, and as the 2019-20 student government president, Da believes that campus should feel like a place where every student can find a sense of belonging. Part of his mission this year is to help redefine what it means to be a UW Tacoma Husky.

Da was born at Fort Lewis (now Joint Base Lewis-McChord). Throughout his childhood, he moved around to places like Germany, Virginia and Tennessee before eventually moving back to Washington, where he attended Steilacoom High School. Da is a first-generation student, and became interested in healthcare while helping his father navigate the Department of Veterans Affairs system. Da witnessed the frustrations his father experienced, and saw firsthand the importance of efficient healthcare that meets the needs of patients. Da looked at a few different schools, but ultimately decided upon UW Tacoma because it offered a healthcare leadership degree, which fell in line with his goal to help make healthcare more equitable for all.

“I wanted to be like my dad where he practiced selfless service and serving others. But I wanted to do my own path, so I think healthcare leadership was my way of doing it,” said Da.

Leadership seems to come naturally to Da, though his path to becoming the president of the Associated Students of UW Tacoma wasn’t exactly planned. Unbeknownst to him, Da was nominated to student government his sophomore year as the Undeclared Major Senator by friends who saw his leadership qualities and knack for making connections. “Someone wrote my name down as the Undeclared Senator or Pre-Major Senator,” he said. “There was no one running for it — so I was a write-in candidate. I had one vote. They told me it wouldn’t be too much on my plate, so I eventually agreed, and that’s what led to me being in this position.”

At the time, Da was already actively involved as a Pack Advisor, where he helped new students with orientation and navigating their first year on campus. He also worked at the Center for Equity & Inclusion as an assistant at the campus food pantry. His work at the Pantry would eventually influence his work as an ASUWT representative. In his first year as a senator, Da worked with fellow leaders to raise awareness of the Pantry while also working to increase engagement and reduce the stigma attached to food insecurity. “The Pantry is a free resource available for all students, and they should know it’s available,” said Da. He helped start the Pantry Cookoff, a campus event where students are invited to try a meal made from Pantry ingredients and learn about the resources available. Da also helped support the availability of culturally relevant ingredients like spices, dried beans and fresh foods to the campus’s diverse student body. Da believes meeting students’ basic needs is crucial to their health and well-being, as well as a key element to success in school. “When I worked there, the majority of the food was canned food,” he said. “If you look at our student body, a lot of our students are diverse. In my culture, we don’t eat canned foods. We actually eat fresh. So we’re trying to expand the culturally-relevant food.”

Student government turned out to be a great fit for Da. When the chance to run for 2019/20 ASUWT president came along, he saw an opportunity to further serve his fellow students’ interests here on campus as well as in UW tri-campus meetings. “My job is to make sure that on any decision-making that happens with administrators, there’s some student voice included, so that it’s transparent, so that everyone’s included,” said Da.

Da also wants to help create an environment where his fellow students can feel at home on the UW Tacoma campus. He lives in Court 17 and believes that living on campus has helped him integrate better into Husky culture. He’s excited about ASUWT’s recent involvement with the campus and the Tacoma Housing Authority to develop a program for students that will increase housing availability, combat rent costs, and reduce commute time by allowing students to live closer to campus. This winter, 75 new units will become available near Tacoma Dome Station.

Last year Da and his friend Derek Dereks started UW Tacoma’s ping-pong club to create a fun and relaxing space where students can connect by hanging out and playing a game together between classes. Now Da’s attention is focused on increasing food options for students which will further incentivize them to stick around campus. “One thing that food does is bring community together,” he said. ASUWT plans to bring Tacoma-area food trucks to campus that offer affordable meal options or Husky discounts to help keep costs down for students.

Above all else, Da hopes to use his position as a student leader to ensure that UW Tacoma students feel connected, welcome and accommodated. “I really want to focus on what it means to be a UW Tacoma Husky.” In Da’s mind, that means every Tacoma Husky “feels well integrated in the community, connected with their professors, and benefits from a more intimate academic and classroom experience.”