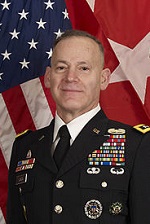 Lt. Gen. Stephen Lanza served as commander of I Corps at Joint Base Lewis-McChord from February 6, 2014 to April 3, 2017. I Corps is a globally responsive and regionally aligned force that supports the Pacific region. Through military-to-military engagements, partnership capacity building exercises, and security force assistance operations, America’s Corps provides agile mission command and trained forces to support the Army’s Prevent, Shape, and Win Strategy.

Lanza was commissioned into the Field Artillery in 1980 after graduating from the United States Military Academy at West Point. He is a graduate of the United States Army Command and General Staff College and the School for Advanced Military Studies at Fort Leavenworth, Kansas. He has a bachelor of science degree from the United States Military Academy, a Master of Science in Administration from Central Michigan University and a Master of Science in National Security and Strategic Studies from the National War College at Fort Lesley J. McNair, Washington D.C. He has also served as a National Security Fellow at the Massachusetts Institute of Technology, Cambridge, Massachusetts.