“For a center that’s focused on social responsibility, it wouldn’t be very socially responsible to push for an in-person event,” says Rachel Vaughn, executive director of the Center for Leadership & Social Responsibility (CLSR) at the Milgard School of Business.

Vaughn is referring to the CLSR’s annual Milgard Invitational Case Competition on Social Responsibility (MICCSR). The event is in its tenth year. Normally, students from around the world including Brazil, Italy and South Korea would come to campus for this competition. They would spend the days leading up to the event preparing, getting to know students from UW Tacoma or maybe taking a field trip to the Space Needle.

Large, in-person events like the MICCSR are not possible right now due to the pandemic. “This year we’re all remote,” said Vaughn. The format may have changed but the competition’s emphasis on providing students with real-world problems has not. “We try to get a sense of what’s timely and relevant,” said Vaughn. “We’re looking for something that really digs into issues of corporate social responsibility.”

Crawl Before You Walk

UW Tacoma Professor Shahrokh Saudagaran served as the founding Dean of the Milgard School of Business from 2004 to 2015. Among his accomplishments during this time, Saudagaran helped launch Milgard’s case competition. “We launched the center in 2006 with a gift from the Milgard family,” said Saudagaran. “One of the first events we created was the case competition.” 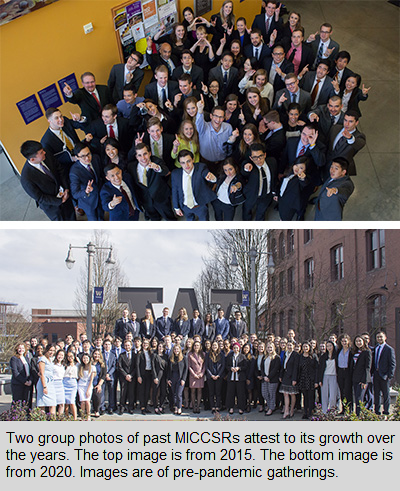 Saudagaran has a style which he describes as “crawl before you walk, walk before you run.” The case competition started as internal to Milgard students before expanding to now include 20 teams from 11 countries. “This year for the first time, we have a university from every continent,” said Saudagaran.  “The non-U.S. universities participating in this event are without exception among the top two-to-three universities in each of these countries.”

The MICCSR’s evolution is very much in keeping with Saudagaran’s philosophy. “You want to be known for something,” he said. “Back when we started, we didn’t find any undergraduate case competitions that focused on corporate social responsibility. We said, ‘hey, this is where we can make a difference.’”

Milgard still hosts an internal case competition. The winner of that event competes in the MICCSR. Vaughn develops the Milgard-only case, Saudagaran puts together the case for MICCSR. “Last year we looked at Saudi Aramco, the big oil company, when it was making noise about getting listed on the New York Stock Exchange,” said Saudagaran. “It’s a fossil fuel company, plus there were political issues related to the murder of Jamal Khashoggi.”

Students were then asked if they would invest in Saudi Aramco. “There’s no right answer, but students needed to tell us why they would or wouldn’t,” said Saudagaran.” This year’s case also has an international focus.  “It’s going to be very interesting to see the different perspectives from the different nationalities,” said Annemarie Martin, Program Manager for the Center of Leadership & Social Responsibility.”

Students participating in this year’s MICCSR received the case on February 13. They then spent the next week researching and preparing their argument before submitting a recording of their presentation on February 20. This is a lot of work in not a lot of time. It is important to remember that most (if not all) of these students are collaborating over virtual platforms like Zoom.

The 20 teams will be broken into four different pools. Each pool has been assigned a panel of judges.  “They’re all community leaders,” said Martin. The judges will evaluate the presentations and provide feedback as well as ask questions during individual sessions on February 25. Four winners, one from each pool, will then be chosen to participate in the final round on February 26.

The final will be live streamed over YouTube. “The virtual aspect of the event this year is that students will be able to share that YouTube link with their friends and family, and so we could conceivably have people watching from all over the world,” said Vaughn.

The first-place team (U.S. teams only) receives $1,000 per participant. Tax laws prohibit the Center for Leadership & Social Responsibility from giving cash gifts to international teams. In years past, the Milgard School of Business offset this by paying for the local expenses (hotel, sightseeing) of all non-U.S. teams but that isn’t an option currently.

Even so, students do take something away from the MICCSR. “It’s such a rewarding learning experience,” said Martin. “Students get a chance to present their ideas to professionals and get feedback they can use not both now and later on in their careers.”

CLSR’s annual Milgard Invitational Case Competition on Social Responsibility (MICCSR) event is in its tenth year. Normally, students from around the world including Brazil, Italy and South Korea would come to campus for this competition. But not in a pandemic.